Home > Streets & Squares > Dam Square > Was Amsterdam named after a dam in the river Amstel?

Table of Contents hide
1 The Zuiderzee (South Sea) and the IJ
2 The New Dike
3 Trade
4 Medieval Amsterdam: Old Side and New Side
5 But what about the Dam?

Most tourist guides say that Amsterdam developed around a dam built in the river Amstel around 1270 AD, and that this dam which was located at present-day Dam Square — gave the city its name.

But historians say that decades earlier the small settlement in the Amstel delta was already known as ‘Amestelledamme,’ or ‘Amstelredam’ (later, ‘Aemsterdam’ and later still ‘Amsterdam’).

The trading post was home to farmers, fishermen, traders and craftsmen who, around 1220, settled along a dike built to protect the low lands against the flood waters of the Zuiderzee (South Sea).

Aem or aeme was Old Frisian for ‘river’ or ‘river delta.’ ‘Stelle’ is of Frankish origin and meant ‘(suitable) place to stay ‘ or ‘settlement’ and ‘ster’ indicated the people living in such a place. ‘Dam’ is, well, ‘dam’ or ‘dike.’ 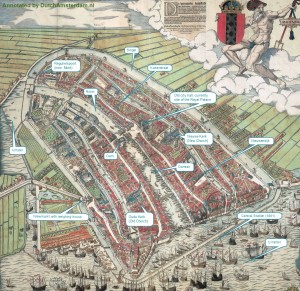 Hence the name ‘Aemsterdam’ literally meant ‘people who have settled at the dike along the river.’

In various histories of Amsterdam and surroundings you’ll find such names as Aemstelle, Aemestelle, Amestelle and Aemster either used as synonyms for one place or another, or indicating separate communities. Apparently the river itself derived its name from these settlements, rather than the other way around.

The Zuiderzee (South Sea) and the IJ

Legend has it that Amsterdam was founded by two fishermen looking to escape a storm in the Zuiderzee (South Sea). The story goes that their dog jumped ashore and threw up at the spot where the city later developed. No one knows for sure, of course, but older versions of the city’s emblem do sport two fishermen in a boat, along with a dog.

Whether that depiction is actually older is debatable — or, rather, not likely since most versions already include the emblem consisting of a red shield sporting a black line with three St. Andrew’s Crosses.

Originally a landlocked lake, the Zuiderzee — just north-east of what became Amsterdam — was greatly enlarged during disastrous floods that hit the low lands to the West of it during the last few decades of the 12th century. At this time, the lake also connected with the Nortsea in the north.

These floods also created an inlet known then as the Y (nowadays known as ‘IJ’ — both versions pronounced as ‘ay’). This the body of water located behind Central Station. 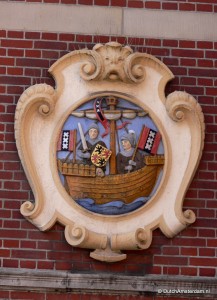 Old Amsterdam shield, this one at the Munt tower, shows the two men and a dog from the city’s founding legend
© Copyright DutchAmsterdam.nl. Want to use this photo?

One of the rivers which fed into the IJ was the Amstel. The river’s mouth formed a delta, with the water flowing into the Y estuary and from there into the Zuiderzee.

As early as the 11th century farmers from nearby Utrecht had already started building dikes along the Amstel, which until then had no fixed course.

As farmers dug drainage ditches in the peat and swamp land the peat began to settle. To protect these low lands against floods from swollen rivers, as well as the Zuiderzee and the Y inlet, dikes were built throughout the area.

To the South of the IJ one such dike started all the way in Santpoord, behind the dunes in the West, and ran to Weesp, just east of current-day Amsterdam.

Initially the Amstel proper only reached the area now known as Amsterdam Zuid (South) — from where it formed its delta. Where the delta flowed into the IJ was the Aemerak or Ammerak , a natural harbor located at the present-day Damrak — the street that runs between Dam Square and Central Station. ‘Rak’ is said to be Old Frisian for ‘big water.’

At the mouth of the Aemerak the dike ran South along what is currently called Nieuwendijk (literally, New Dike) and, further South — across from present-day Dam Square — Kalverstraat (a name that refers to the cattle market once held there).

Archeologists have found remains of houses built along Nieuwendijk dating back to around 1225 at a depth of 6 meters below the current street level.

Note that while ‘rak’ was Frisian for ‘big water’ it is also said to be old Dutch for a ‘straight stretch of water’ — either naturally, as in a river or a man-made, as in a canal. Thus some guide books indicate that ‘Ammerak’ was the final, straight stretch of the river Amstel. Later the quay among this canal became known as Damrak — dam alongside the canal. The small body of water you see at the start of Damrak, closest to Central Station, is all that remains of that ‘rak.’

South of Dam Square is Rokin — which long included another straight stretch of water connecting to the actual Amstel river. Further toward Munt Square you can see what remains of this canal.

It is believed that the local settlers had themselves created this waterway — by connecting and deepening existing riverlets — in order to better guide the course of the majority of the Amstel’s water through its delta. Until that work was completed the Boerenwetering, a river arm located at present-day Nieuwezijds Voorburgwal, was used as the major traffic artery between Amstel and the IJ.

This is all still years before ‘the dam’ at at what is now Dam Square was built.

Further inland a small settlement then known as ‘Aemstelle’ — nowadays known as Ouderkerk aan de Amstel (literally, ‘Old Church at the Amstel’) — had long been an important trading point.

A lot of trade traffic took place on the Zuiderzee, for instance between such Dutch cities as Kampen en Deventer, but with ships also visiting towns along the Baltic Sea.

The village of Aemstellle was situated at the crossroads of two important trade routes: between Utrecht to the East and Kennemerland to the West — and between the Baltic Sea and the hinterland and beyond.

While Aemstelle was established by farmers, over time it attracted lots of traders as well. Similar communities formed throughout the district, but Aemstelle was important enough to be the location of a small castle (in fact little more than a fortified house) that was home to the son of one of the lords of the Van Aemstel dynasty.

Known in Dutch as the ‘Heren van Amstel‘, this was a major lordly dynasty in medieval Holland. They governed the area around the Amstel in the name of the bishop of Utrecht and the count of Holland.

Medieval Amsterdam: Old Side and New Side

As more and more people settled along the dike at Aemerak, Aemsterdam grew in importance and gradually took over Aemstelle’s function as trading post.

By now people had settled along the dike on the East sides of Damrak as well.

As an aside: tourist guides explain that Amsterdam’s medieval core is divided in an ‘Old Side’ — East of Damrak, and a ‘New Side’ – to the West of it.

Confusingly the district known as Amsterdam’s Old Side — which includes the Red Light Distrcit — was actually settled later than the ‘New Side.’ The terms ‘old side’ and ‘new side’ came into use when Amsterdam was divided into two parishes — one with the ‘ Old’ Church, built in the 1300s, and one with the New Church wwhich came into use in 1408 at what is now known as Dam Square. Before that, the two sides were known as ‘Church side’ and ‘Windmill side.’

Anyway, historians says that by 1250 some 500 people lived in Aemsterdam.

But what about the Dam?

Around this time a new castle was built by Gijsbrecht ll, the then-reigning Van Amstel lord. This castle was located between the Boerenwetering and the Aemerak. Some time around 1265 AD this lord commanded that a sluice be built in the river Amstel — and this was done at the location of the present-day Dam square.

Actually, it should be noted that historians are not quite clear about this. Some say there wasn’t even a castle — and that foundations unearthed some years ago were those of a building that was never finished.

Others say they have good reason to believe that the dam at what is now Dam Square was actually built as much as 50 years earlier. And yet others claim that estimate should be doubled. It is hoped that archaeological research performed during the construction of the new North-South metro line will provide some clues in the matter.

Yet another thing the historians are not quite clear about is the actual nature of the dam. Some say that while there may at some point have been an earthen dam — perhaps at one of the earlier suggested dates — the structure built at Gijsbrecht’s demand was actually a wide bridge with wooden doors between its pillars to serve as a dam of sorts. It is quite likely that these doors were closed during high tide and opened during low tide.

At any rate, once the ‘dam’ was built ships were able to sail right up to it to have their goods unloaded. The wares were either sold right there, carted off to warehouses, or switched to smaller ships which then sailed onward via the Rokin.

Nowadays nothing there is no trace of a dam at Dam Square. However, water from the river Amstel still flows beneath the ground. A culvert runs from the remaining water of Rokin underneath the Dam — in front of the National Monument — and underneath both the Bijenkorf warehouse and the old stock exchange building to the remaining stretch of water at Damrak.

An Amsterdammer last updated this post on Thursday, February 18, 2016, at 7:02 AM CET (Central European Time)