Armed with a list of 25 establishments opening their doors and flinging back their red curtains, hundreds of tourists and locals seized the opportunity to see a prostitute’s bedroom, watch a brief live peep-show or chat to a lap dancer.

Harrowing reports of forced prostitution and human trafficking have caused a public outcry in recent months and even prompted calls from councillors for the 800-year-old red light district to be shut down, to the fury of many sex workers.

“The open day is partly to promote the red light district but also to help change the image of the area because we think it is too negative,” said organiser Mariska Majoor, a former prostitute who now runs an information centre on the district.

“There are not just problems here,” she added.

Prostitution has been fully legal in the Netherlands since 2000, and sex workers are self-employed and subject to tax.
– Source: Red light district “open day” draws curious Dutch, Reuters, UK, Feb. 18, 2006 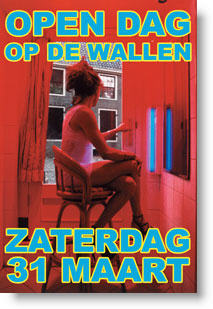 
Unveiling of Statue in Honor of Prostitutes

Highlight of the event will be the unveiling of a statue in honor of prostitutes around the world.

The statue, created by artist Els Rijerse from ‘s-Graveland, Netherlands, depicts a woman who, feet apart and standing in a doorway at the top of small set of steps, looks self-assuredly into the world.

It will be placed on placed on the Oudekerkplein [Google Map], the square surrounding Amsterdam’s oldest church.

The square, which also features a “coffee shop” (the Dutch euphemism for an establishment where soft drugs can be bought and used), an Irish Pub, and several bordellos, is home to the Prostitution Information Center.

The statue was created on the initiative of Mariska Majoor, a former prostitute who now owns and operated the Prostitution Information Center (PIC). Majoor also is the organizer of the Open Day.

Aimed at the Dutch

The first Open Day was organized in part to combat negative publicity about Amsterdam’s Red Light District, including then recent reports about forced prostitution.

During the Open Day, a Dutch-language program booklet is available at the PIC (€1.00). It includes information about the participating locations — which range from a sex theater to the Salvation Army.

If you don’t read or speak Dutch, show up anyway. You’re bound to find people willing to interpret.