Table of Contents hide
1 Quick facts about Rokin, Amsterdam
2 Shopping Street
3 Notable buildings and other highlights
4 What does Rokin mean?
5 Canal Tours
6 Something to eat and drink
7 Rokin: then and now

If you’re in Amsterdam for any length of time, you’ll often find yourself travelling along this street either on foot or by tram.

In the 19th century this is where the well-to-do shopped.

Nowadays if you can look past the over-abundance of low-class mobile phone shops, cheap souvenir stores, as well as the seemingly interminable Noord/Zuidlijn subway construction project, you’ll still find a street rich in culture.

Rokin includes lots of historic buildings, a canal, a top-class archaeological museum, and plenty of clues to the history of this part of medieval Amsterdam. 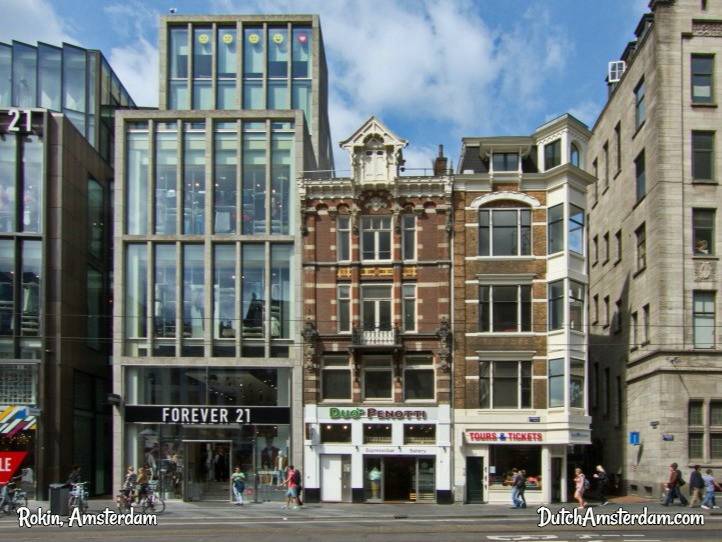 That said, just as with Damrak, over the decades much of Rokin’s erstwhile allure has eroded.

At the same time, things are looking up. The Rokin shopkeepers’ association is making efforts to market the street as a shopping destination.

Rokin Plaza, on the west side of the street, features US fashion chain Forever 21 and Spain’s Pull and Bear.1

Recently, Scheltema — one of the largest bookstores in the Netherlands — opened a 3200 m², five floors store at number 9, just off Dam square. Among its collection, displayed on five floors, you’ll find plenty of English-language books and magazines.

A few doors down, Canada’s Hudson’s Bay warehouse will open its doors in the summer of 2017. The huge edifice, currently under construction, was supposed to have become a flagship store for Britain’s Marks & Spencer warehouse. But having been “made an offer we could not refuse” the company pulled out.

Scheltema, Hudson’s Bay, and older companies are located on the east side of the street.

That is where a tree-lined boulevard — complete with a fountain, benches, terraces — will soon replace the current subway construction mess. 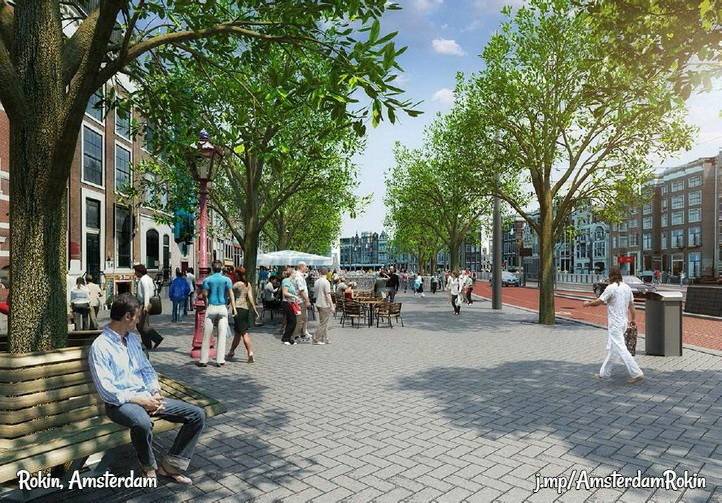 The Rokin metro station for the Noord/Zuidlijn — expected to be in operation in the summer of 2018 — will be located halfway between Dam square and Munt. 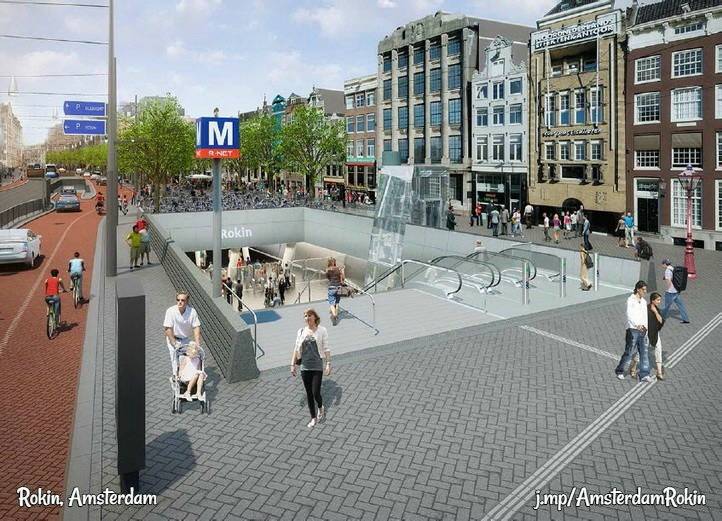 Artist’s conception of the entrance to the Noord/Zuidlijn metro station at Rokin.

Notable buildings and other highlights

Still, there is plenty to see and experience at Rokin.

Sure, there are a few buildings from designers who apparently hate the city. Why else would they produce monstrosities that are completely out of step with their surroundings? As a for instance, we’re referring to the Options Exchange building at number 65. It was designed by Cees Dam, the same ‘architect’ who can be blamed for the Stopera — the oversized ugliness that serves as combination city hall/opera building — as well as the hideous office block that defaces Dam square, right next to the beautiful building Bijenkorf warehouse.

But on either side of Rokin you will also see many beautiful gables and facades.

What does Rokin mean?

Rokin used to be a part of the delta of the river Amstel and was simply called Amstel. This branch flowed through what is now Dam square (Dam in the river Amstel: Amsteldam) and Damrak and then — beyond where you nowadays find Central Station — to the river IJ.

In Old Dutch rak meant a ‘straight body of water,’ but city experts say Rokin did not get its name from that word. At first the houses at Kalverstraat extended to the water of what was then still called Amstel. At that time there were no quays.

In the sixteenth century the facades of those houses, starting at Dam square, were pushed back for the construction of a quay. Segments of those houses were simply removed. This drastic ‘retreat,’ inrukken in Dutch, is said to have given the later street its name.

Amsterdam historians say that in 1559 the name Ruck-in was used. A few years later this became Rock-in, and later still Rokin.

Of course, there are also those who think the name came from rak plus in (e.g., the straight canal inside the city).

A woodcut made by Cornelis Anthonisz in 1544 helps you visualize the situation. Small ships ferried goods from merchant vessels anchored in the harbor to Dam square. From there traders either carted the wares to Kalverstraat (where there was a market, inlcluding one for cows and calfs) or beyond. Other goods were re-loaded onto cargo boats that sailed inland via the river Amstel. 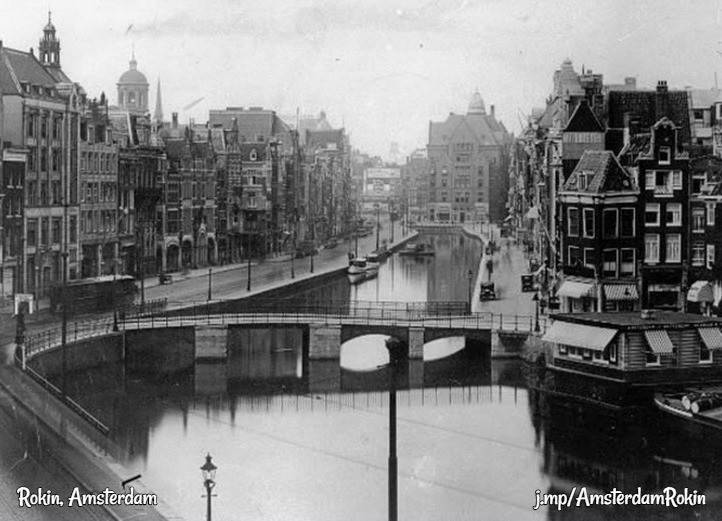 From Spui to Munt square the water still flows in what Amsterdammers sometimes refer to as the ‘Natte Rokin’ (wet Rokin).

Taking a boat ride through the canals of Amsterdam is one of the city’s most popular tourist attractions. For us, the publishers of Dutch Amsterdam, Rederij Kooij is the canal tour company of choice.

The site of its present-day offices was once home to the barge house of Glasius & Hopman, local cargo transporters.

The canal tour company was started by Piet Kooij. As a schoolboy, Piet found a discarded bicycle. He fixed it up and exchanged it for a broken-down motorbike. Once he had finished restoring it he traded it in for an old boat, which he promptly sold for 500 guilders (€ 226; $ 327) — a small fortune at the time .

In the winter of 1922, he stumbled across a motorboat moored at Rokin. He bought and fixed it, and since the boat came complete with a launch license decided to offer tours of Amsterdam’s canals.

You can buy something to drink and get a candy bar on board of the tour boat but you’re better of bringing something yourself. The boat ride takes one hour. There is a toilet on board. 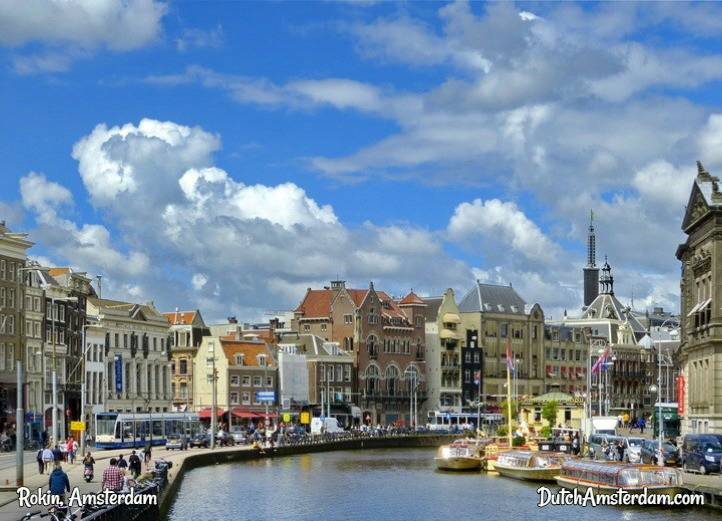 Something to eat and drink

There are several small eateries with outdoor seating along Rokin. Many are forgettable at best. Did you really come all the way to Amsterdam to eat crappy pizzas, Nutella, mass-produced ice cream, or dime-a-dozen sandwiches?

Tip: make your way up the little alley (Grimburgwal) across from the Rederij Kooij ticket office and settle down at Café ‘t Gasthuys. Inside is fine; outside at the terrace alongside the canal is — weather permitting — better.

Mind you, the coffee is pretty bad but the beer and food is good.

At Rokin itself Brasserie Beems (at number 74) is an excellent choice for lunch or dinner. Tasty food, friendly service, fair prices, pleasant atmosphere.

Many years ago, The Tara, at Rokin 85-89, was one of our favorite hangouts. That changed when they modernized part of the bar, and when prices kept going up while quality and service kept going down.2

A few doors away, at number 75, you’ll find the Bierfabriek — beer factory. A brewery serving craft ales and organic grilled meals, it is the type of pub that you makes you feel good.

And then there is De Drie Graefjes at Rokin 128 — an excellent place for a (late) lunch. It also has a very well-deserved reputation for excellent, American-style cakes and pastries.

Rokin: then and now

If you speak Dutch, or are studying the language, you’ll enjoy this brief report on Rokin:

The old footage shows a ferry that used to cross the now filled-in water of the Rokin. The vessel carries a advertisement for Turmac, a Dutch brand of cigarettes at the time.

Among other things the narrator explains that in the old days people used to dump their trash straight into the river. Therefore archeologists are working alongside the metro station construction workers. The Amsterdam Museum will at some point no doubt feature an exhibition with many of the items found during the Noord/Zuidlijn construction process.

By the way, during summer evenings the intersection between Spui and Grimburgwal — at the Rederij Kooij offices — used to provide some unique entertainment: