Nearly all trams and buses operated by GVB, the Municipal Transportation Service1, start or end their route here. So do many of the regional buses, as well as most of the metro lines. 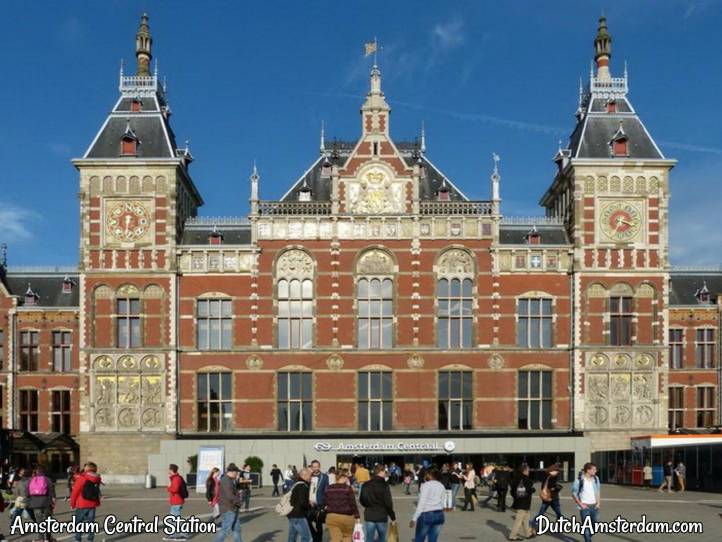 Index to this page

All tram stops are at the front of the station, which faces Amsterdam Centrum — the medieval center of town.

Almost all of the buses have stops in the terminal at the rear of Central Station. The bus station faces the river IJ and (across the river) Amsterdam Noord. Signs inside the station will direct you to IJzijde (If you pronounce it like ‘eyesight’ most people will know what you mean).

But note: some of the night buses still stop across the water at the front of the station. Consult the map below to find your boarding spot.

Entrances to the Metro subway lines (‘the underground’) are just outside the front of the train station — as well as on the IJzijde (rear side).

Ferry boats to Amsterdam Noord are at the rear of the station.

The taxi rank is also situated the rear of the station, at the west side.

Kiss-and-ride stops are at the rear of the building as well, both on the east- and west sides.

Check the I amsterdam pass for savings on public transport and more. 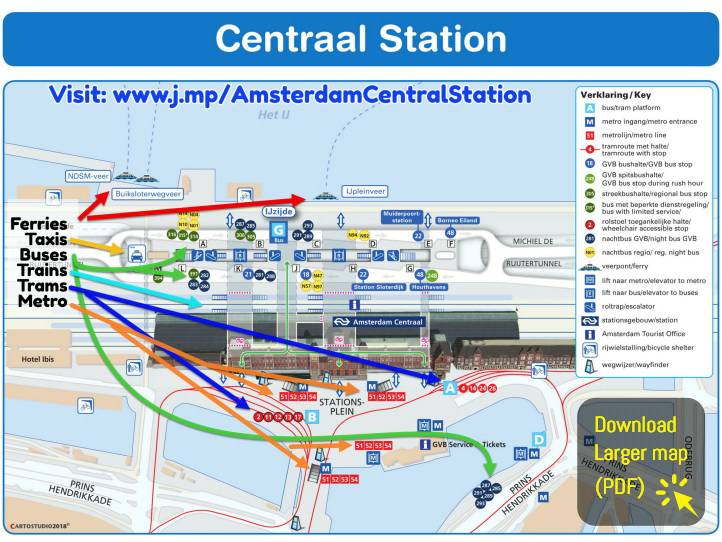 This map of Amsterdam Central Station shows the locations of ferries, the taxi rank, bus stops, trains, trams, and metro. Click the image for a larger, PDF map.

The vast majority of foreign visitors to Amsterdam arrive at Schiphol Airport, which is located 15km (9 miles) southwest of the city.

From there, most people take the train into town.

The 15-minute ride to Amsterdam Central Station first takes you through several drab suburbs, showing none of the picturesque scenes promoted by the tourist office. If you’re into graffiti you’re in luck though, as the tracks are lined with some very creative examples of the art form.

To and From Schiphol Airport

The Sloterdijk station, about halfway into the ride, is noteworthy only because it serves an extensive business park neighborhood that wasn’t there when I grew up… The village of Sloterdijk — one church and a handful of small houses — is still there in the midst of all the ‘award-winning’ high-rise architectural wonders.

The final leg of the short train ride offers brief glimpses of the port of Amsterdam, and your first look at gabled houses — former warehouses long ago renovated into expensive apartments.

Trains from Amsterdam Central Station to Schiphol Amsterdam Airport leave from platforms 13, 14, or 15.

Trains servicing Schiphol Airport leave so frequently that you do not need to plan for a certain time. Depending on which train you catch, the ride takes 13-17 minutes.

In the evening there are fewer trains. During the night, between 1 am and 5 am one train an hour leaves for the airport.

At Schiphol your train arrives in an underground station, where escalators or elevators will take you one floor up to the central hall. From there you can walk to Departure area 1, 2, or 3.

There are luggage storage lockers just inside the eastern-most entrance. They operate by debit card (PIN) or by credit card (VISA or Mastercard, as long as the card includes the MAESTRO logo).

You pay per 24 hours. If you open your locker in the meantime, you will have to pay again.

The maximum rental period is 72 hours, after which your luggage will be removed and sent to the Central Found Items Bureau in Utrecht

Rates and terms are listed here. But note: in Amsterdam non-standard, higher rates apply. For the first 24 hours, you pay €7,00 for a small locker and €10,00 for a larger locker.

The new bus terminal, opened in December 2014, is on the IJzijde of the station. IJzijde literaly means: the side of the IJ. That’s the name of the river which separates Amsterdam North from the rest of the city. [Note: some guidebooks may write ‘IJ-zijde’ instead.]

Remember to buy public transport tickets ahead of time.

How do you pronounce IJ?

Say it: The name ‘IJ’ consists of a digraph — two letters that are pronounced like a single letter. In Dutch both letters are capitalized.

You’ll hear locals refer to “Het IJ,” so use that when asking for directions: something like ‘hat eye‘ will work fine.

The bus station is at the same level as the train tracks, and provides magnificent panoramic views of the river IJ.

The terminal can be accessed via escalators, elevators or stairs.

It is located underneath a new, glass roof that features the name ‘Amsterdam’ in giant letters. The roof covers not just the bus terminal, but also the taxi rank, the kiss & ride places, and a significant portion of the quay.

Amsterdammers — us included — are happy that the roof was designed to match the older glass roofs of the train station. Too many iconic buildings are assaulted by architects who have a complete disregard for monuments. 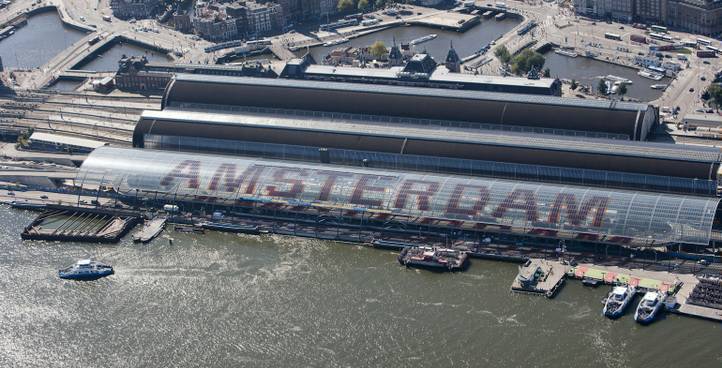 Just in case you were wondering, here are some facts about the bus terminal:

The station is home to a number of shops — anything from fashion- and beauty stores to a supermarket and a warehouse.

There are many restaurants and fast-food places as well — more than 65, in fact. They offer a wide variety of dishes from around the world. Among our personal favorites: Salsashop (Mexican, but basically a clone of the America’s Chipotle), Saigon Càphê (Vietnamese), Fishbar Saltzer (‘World’), and Saté Bar (Indian).

Underneath the bus terminal is the IJhal (IJ hall), which is home to shops, restaurants and services.

You’ll find an Albert Heijn supermarket, public toilets, and GWK/Travelex — a currency exchange we think you should avoid in favor of….

Also in this hall is the ‘I amsterdam‘ store, which doubles as a tourist information spot, and a NS (Netherlands Railways) tickets and information service point.

Below the IJhal is a traffic tunnel for cars and motors, which leaves the quay free for pedestrians and bicyclists.

The borough of Amsterdam Noord has long been the city’s stepchild, so to speak. For decades, ‘real’ Amsterdammers wouldn’t want to be caught dead there. In recent years that has changed. Once a borough meant mostly for the poor working class, Noord — with its many hot spots and prime property vacated by port-related industry — has become a sought-after location.

The busy river IJ — which connects the North Sea to the Port of Amsterdam, and the latter with the rest of Europe — still forms a physical barrier.

As the city expands, city planners and marketing types have come to refer to the river as Amsterdam’s “Blue square,” insisting that it is located in the city center. This explains in part why the IJ-side of the station is often referred to as Amsterdam Noord’s front entrance ‘that makes Noord feel connected to the rest of the city.’

You’ll see GWK Travelex currency exchange offices and cash machines throughout the station — and there are several hole-in-the-wall exchanges along Damrak, the main road to Dam Square. But the best place to change your money is Pott Change. 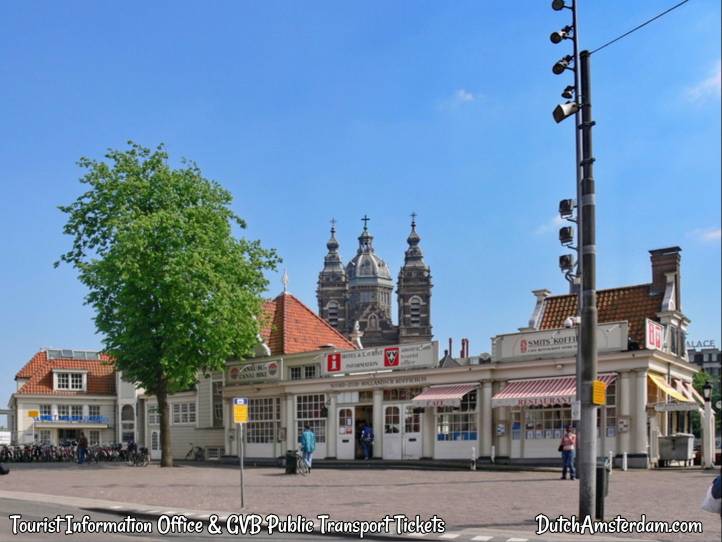 The tourist office is located outside Central Station — in the white building across from, and to the left of, the main entrance. 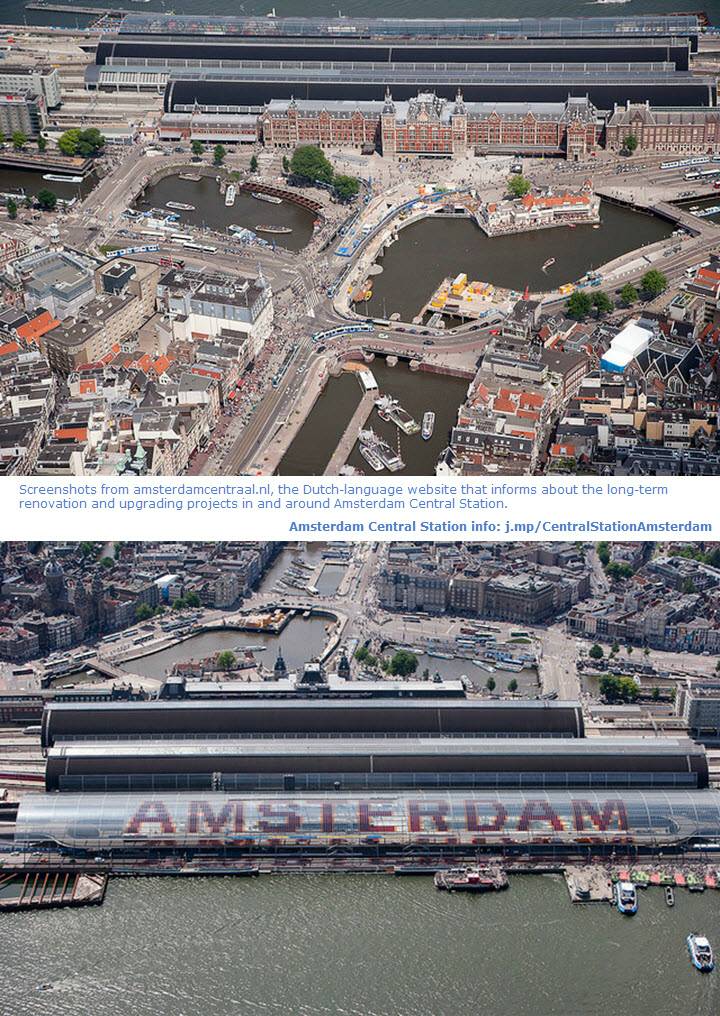 Currently large sections of Central Station, both inside and outside, are construction sites.

Meanwhile there are many projects to spruce up Stationseiland — literally ‘station island’, a reference to the fact that the train station was actually built on three artificial islands.

The train station itself has undergone a metamorphosis, which has made the nearly 130-year old monumental building up-to-date and ready for the ever-growing number of people that pass through it.

Work on the so-called ‘Entree’ (yes, plain and simple: Entrance) commenced in 2018. The area will eventually look like this: 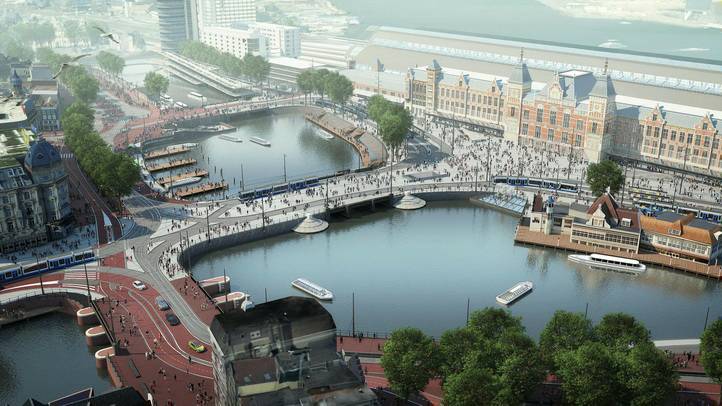 Artist’s rendition of what the area in front of Central Station will look like in the near future.

The project is designed to reduce motorized traffic, to bring back the ‘open harbor front,’ and to construct an underwater bicycle parking facilities.

By comparison, this is what the area in front of Central Station used to look like in the 1970s: 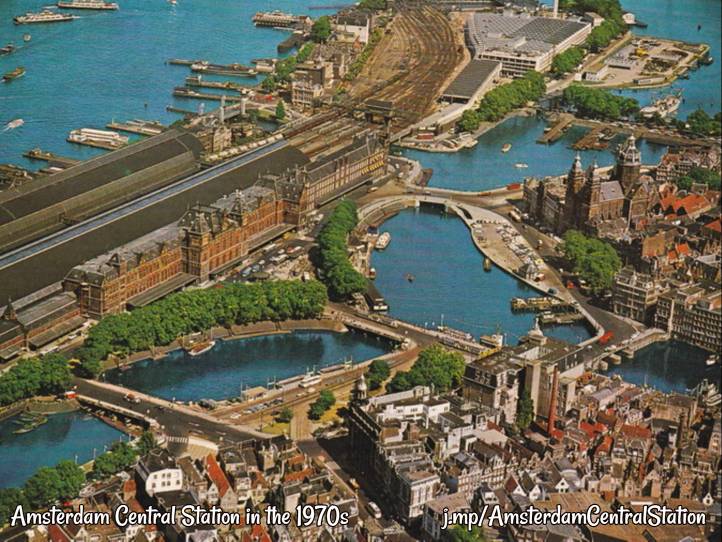 Amsterdam Central Station and surroundings in the 1970s

Central Station currently sees 170.000 passengers a day, making it the most-visited monument in the Netherlands. By 2028, the station is expected to host 267.000 passengers a day — about 10 times the number of customers architect Pierre Cuypers had in mind. 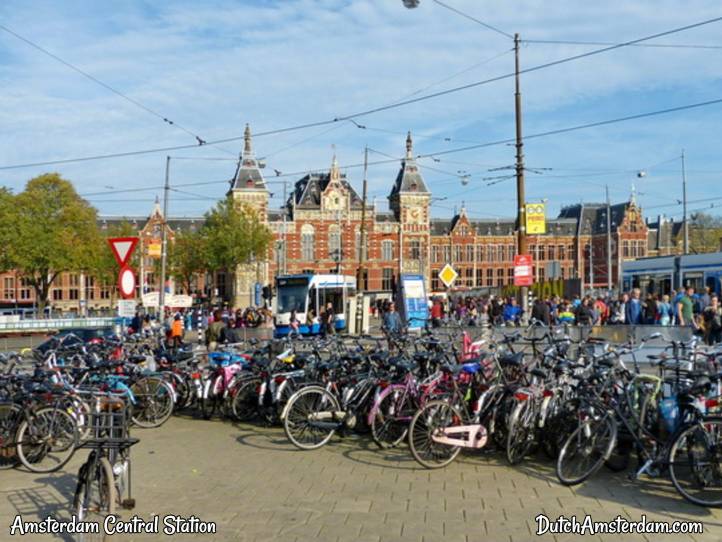 Bicycles are everywhere around the station. A solution is being worked on, including two underwater bike garages

The magnificent Central Station [Google Map] is a work of art in and of itself. It was built in the 1880’s in the Neo-Renaissance style atop three artificial islands, and resting upon 8,687 wooden pilings rammed 30 meters into the sandy soil — a necessary building technique anywhere in Amsterdam.

Note that since it was built the entire station has subsided some 25 centimeters. The owner of the building, Nederlandse Spoorwegen (NS, Netherlands Railways) says that nowadays the station is stable. The construction work you see going on in and around the station is part of the controversial North-South metro line project.

Once you have visited the Rijksmuseum, which opened its doors in 1885, you’ll notice it greatly resembles the Station, which opened four years later. Architect Pierre J.H. Cuypers designed both buildings, aided — in the case of the Station — by A.L. Gendt, who also designed the Concertgebouw.

At the back of the station is the river IJ which separates downtown Amsterdam from North-Amsterdam. At the time the station was built, the IJ used to be Amsterdam’s connection to the open sea — the Zuiderzee, a saltwater inlet of the Northsea. The construction of a major dike, finished in 1933, turned the sea into a lake, the IJsselmeer. Building the station at this location — effectively cutting Amsterdam off from its own waterfront — was a controversial decision.

The front of the station, which nowadays serves more than 1500 trains a day, faces downtown — the center of Amsterdam. All of the city’s top attractions are within easy reach from Central Station, whether by foot or by public transport — bus, tram and metro.

Indeed, Amsterdam Central station is the hub of the city. Trains, trams, buses and subways — along with ferry boats, taxis, regional buses, water taxis and glass-topped tour boats — make this a hive of activity.

We’ve got more information about Amsterdam Central Station, such as where to change your money, where to find luggage storage lockers, how to report lost property, where the tourist office is, and what to watch out for.

See our Amsterdam Hotel Guide
These are Amsterdam’s top museums
Do you need to change your money for euros? There are plenty of currency exchange businesses in Amsterdam. We’ve done the research, and will show you where you get the most euros in exchange for your dollars, pounds, or other currency. Plus: should you bring cash? Or is is better to use a credit card/debit card?

Category: Public TransportRelated to: Central Station, Old City Center, Public TransportThis article is updated regularly. Last major update: May 20, 2017
Last minor update: Wednesday, August 4, 2021 at 8:16 PM, Central European Time (CET)
Transparency:
The DutchAmsterdam website includes affiliate links. That means we get a small commission — at no additional cost to you — for each purchase you make. Your support helps us provide this site free of charge. Naturally, as our Editorial Policy states, our content is never influenced by our advertisers or affiliates.