How does Amsterdam rank?

Table of Contents hide
1 How does Amsterdam rank?
2 Dynamic City
3 Cost of Living
4 Crime
5 LGBT
6 Millennials
7 Quality of Life
8 Popularity Worldwide
9 Popularity within the Netherlands
10 Public Transport
11 Infrastructure
12 Culture
On this page we keep track of all manner of Amsterdam rankings — in local and international surveys, and on a wide variety of topics. Quality of life, cost of living, crime rate, public transport, livability, and so on.

Bookmark this page, as it is updated frequently. Below you’ll find the following topics, with the most recent ranking listed at the top.

Amsterdam remains the least safe city in the Netherlands, according to the 2019 edition of the Crime Index1 published annually by Dutch newspaper Algemeen Dagblad.

The city held on to its position in the index even though there was a reduction in the number of the most common type of crimes.

Amsterdam’s crime figures are skewed in large part by the fact that the city is visited by masses of tourists.

The rankings in the Misdaadmeter are compiled on the basis of police reports for 10 common crimes which have a high impact on people’s perception of safety.

These offenses are offset per municipality against the number of inhabitants. As a result, ten burglaries in a small municipality count more heavily than ten burglaries in a large one. Moreover, the offenses are weighed according to the impact on the victim, based on research by the Netherlands Institute for Social Research (Sociaal en Cultureel Planbureau). Thus incidents of maltreatment weigh heavier than threats, and home burglary is considered worse than pick-pocketing.

Eindhoven takes second place in the Top 3 of least safe municipalities in the Netherlands, while Rotterdam occupies the third spot.

Note: the Crime Index does not take into account organized crime — though burglaries, car theft and pick-pocketing crimes may well be committed by roving gangs.

But Amsterdam, like other municipalities throughout the Netherlands and beyond, also sees a high instance of so-called plofkraken — the practice of trying to break open ATMs with explosives. Though seldom successful, criminals have been using increasingly more powerful explosives, which often cause substantial damage to shops and nearby homes.

Moreover, hand grenades have become a weapon of choice for criminals attempting to intimidate or assassinate their enemies.

Coffeeshops (the cannabis-selling type) are increasingly targeted — usually just by placing a grenade on or near the door of a business.

Business properties are sometimes hit by gunfire in the middle of the night.

Since the City tends to close2, at least temporarily, businesses thus targeted these attacks could be a way to get rid of competitors. It has also been suggested that criminals are trying to hurt each other’s white-wash operations.

Still: In the Safe Cities Index 2017, published by The Economist, Amsterdam ranks sixth globally and first in Europe when it comes to safety.

Incidentally: that infamous ‘Scam City‘ broadcast about Amsterdam was, well, a scam. 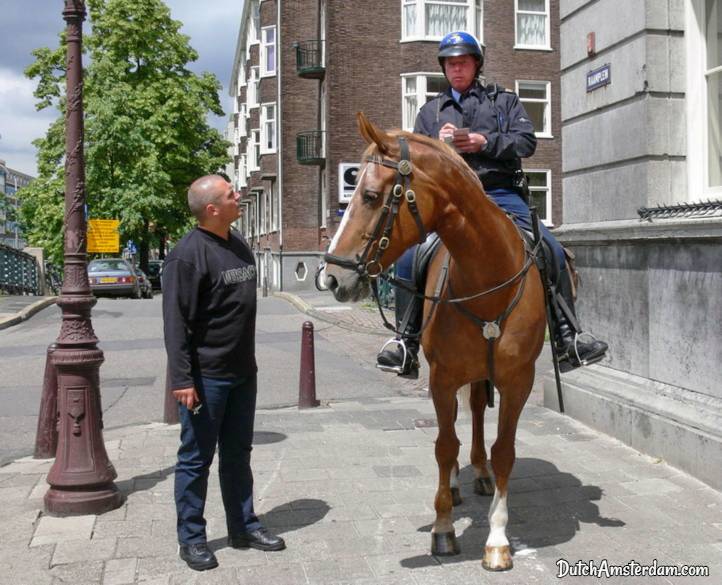 Man argues with Amsterdam police officer over a traffic ticket. The horse seems more interested than the cop.

Amsterdam again ranks fourth place on the Savills IM Dynamic Cities index of the most dynamic cities in Europe.

The top cities for real-estate investment have strong infrastructure investment and well-developed knowledge networks, boast a global talent pool and have strong cultural amenities to help retain that talent. Furthermore, they continue to attract highly skilled labour that creates wealth over the longer term.

Hence the Dynamic Cities project allows investors to choose cities where most people want to work, rest, and play.

Like last year, Amsterdam makes the top 10 for interconnection, inspiration, innovation, and investment.

All of the top 10 cities saw an increase in their overall scores this year, apart from London, which declined by 1 point.

In this year’s report Savills notes the evolution of Amsterdam’s Zuidas, which is increasingly becoming an urban hub and residential area. Sustainability plays a key role in the district’s evolution, which over the next few years is expected to grow with 300,000 sqm of office space, 400,000 sqm of facilities and 7,000 new homes.

Also highlighted is the infrastructure project which will allow for the expansion of the Zuidas train station. The train station will benefit from a public transport terminal, additional tracks and greenery. The number of travelers passing through the station is expected to grow from approximately 80,000 today to up to 300,000 by 2030.

Amsterdam has become more expensive for expats, according to the 2018 edition of Mercer‘s annual Cost of Living Survey. The city ranks 50th in the world — a significant advance from its position at 85 last year.

The high cost of rental properties in Amsterdam is primarily responsive for the jump. Prices on the housing market have risen significantly.

Another reason is the strong position of the euro against the dollar, according to Mercer. This makes it more expensive for companies that work in dollars to send their staff to Amsterdam. That is also why many cities in Western Europe have advanced on the list.

Despite the 35-place jump on the list, among Western European cities Amsterdam remains at 12th place — just like last year.

The top ten most expensive cities in the 24th edition edition of Mercer’s Cost of Living Survey:

Mercer’s survey includes 375 cities across five continents. It measures the comparative cost of more than 200 items in each location, including housing, transportation, food, clothing, household goods, and entertainment. New York City is used as the base city for all comparisons, and currency movements are measured against the US dollar.

On the Cost of Living Index published by Expatistan, a website that tracks over 200 cities worldwide, Amsterdam ranks 35th — up from 42nd in June of last year.

It is a handy website to check the cost of a range of goods and services in Amsterdam — in Euro or in the currency of your choice.

Numbeo, which has a similar approach to Expatistan, in June 2018 ranks Amsterdam 33th out of 546 cities in the world.4

Amsterdam, the capital of the Netherlands, in 2018 also remains the country’s ‘murder capital’.

According to Moordatlas (Murder Map), fourteen murders took place in Amsterdam this year. (2017: 16; 2016: 24). The city also saw three liquidations in the criminal circuit.

Rotterdam is in second place with 12 murders.

Amsterdam is the second most LGBT-friendly city in the world, says Nestpick5, a Germany-based online platform for furnished rental homes and rooms in the mid-range. Madrid takes first place, while Toronto, Tel Aviv, and London round out the Top 5. These cities are followed by Berlin, Brighton (UK), Barcelona, New York City, and San Francisco, along with 90 other cities in the company’s Top 100 Best LGBT Cities 2017.

The list is compiled by polling the LGBT communities in 80 countries on three factors: the strength of their city’s gay dating scene, the quality of its LGBT nightlife, and the openness of their fellow citizens. Nestpick adds a fourth category of safety, determined by public statistics provided by police departments.

Finally, a fifth category considers the LGBT rights of citizens in each of the 40 countries included in the ranking.

The entire country of the Netherlands ranks 11th out of 49 European countries in the 2018 country ranking produced by ILGA-Europe — the European Region of the International Lesbian, Gay, Bisexual, Trans and Intersex Association. 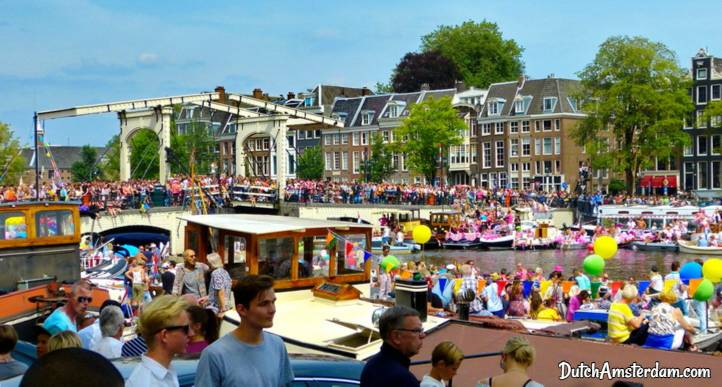 Nestpick notes that millennials care more about housing and human rights than about partying or, as sometimes perceived, a sense of entitlement.

In the introduction to its 2018 Millennial Cities Ranking6 report, Nestpick — a company that helps people find furnished apartments across Europe — says it has “witnessed first-hand a clear pattern in the way that young professionals flock to some of the most dynamic urban districts.”

In 2018, the second year the company publishes this report, Amsterdam ranks at number 4 in the Top Ten of Best Cities for Millennials.

The methodology included anything from looking at the median price of a 39m2 furnished apartment, to scores on transport, health, internet speed, LGBT friendliness, gender equality, and employment opportunities.

These indexes can differ greatly as various firms use different criteria and statistics.

The Deutsche Bank, in its report “Mapping the World’s Prices 2018,”7 ranks Amsterdam in 10th place in the Quality of Life index.

In its Quality of Living Index 2018, Mercer lists Amsterdam in 12th place. The rest of the list:

Basel is a newcomer in the list. It shares 10th place with Sydney Australia, which means Amsterdam drops one rank to number twelve verses number eleven in last year’s list.

Amsterdam has entered the top ten of the world’s most popular cities as defined by IPSOS, a global marketing and research firm.

The company interviewed almost 19.000 adults across 26 countries. Participants were asked, “Based on what you have seen yourself, or heard about from others, which three
cities in the world do you think are the best to 1) Live in? 2) Visit? and 3) Do business in?

There were sixty cities to choose from. The sum of the three scores for each city was calculated (% live in plus % visit plus % do business) to arrive at the IPSOS Cities Index.

Amsterdam is the only newcomer to the list, moving up to tenth place from 14th in the previous version of the Index.

Popularity within the Netherlands

As in its previous three editions, the 2017 edition of the biannual Cities and Regions survey published by brand consultancy firm Hendrik Beerda8 identifies Amsterdam as the most popular city in the Netherlands.

The survey notes that the city of Rotterdam has strongly gained in popularity, jumping from sixth place to second.

The growing popularity of Rotterdam is mainly due to the continuous renewal of the city — with a flow of striking, innovative construction projects.

Amsterdam is renowned for its canals, wide variety and selection of cultural offerings, attractive restaurants, and its many shops.

As part of its Quality of Living Index, in 2017 Mercer also ranked cities based on their infrastructure — the availability of electricity, drinking water, telephone and e-mail services, public transport, the amount of traffic jams and the supply of international flights.

Amsterdam scored well on all points, except for the degree of traffic jams. Mercer notes that “[b]y addressing this problem, Amsterdam will become more attractive to foreign organizations.”

Amsterdam is the most cultural city in the world according to credit broker TotallyMoney12.

The company used TripAdvisor to determine the number of theaters (in Amsterdam: 96), museums (81), art galleries (54), World Heritage sites (2), concert halls (8), and Michelin-starred restaurants (43) in the 30 cities worldwide that received most international overnight visitors.

Category: NewsRelated to: Cost of Living, rankingThis article is updated regularly. Last major update: March 4, 2019
Last minor update: Tuesday, March 5, 2019 at 9:34 AM, Central European Time (CET)
Transparency:
The DutchAmsterdam website includes affiliate links. That means we get a small commission — at no additional cost to you — for each purchase you make. Your support helps us provide this site free of charge. Naturally, as our Editorial Policy states, our content is never influenced by our advertisers or affiliates.