An Amsterdam canal cruise has been named by Tripadvisor as the number one tourist experience in the world.

We’re not surprised. Some 110 classic style, glass topped canal boat cruise the 165 canals of Amsterdam. In addition there are over 130 manned and unmanned rental boats such as sloops, saloon boats, gondolas and water taxis.

The particular cruise Tripadvisor users have voted into the top spot of the 2022 Travellers’ Choice ‘Best of the Best’ Things to Do Awards is this fantastic, Luxury Open Boat Amsterdam City Canal Cruise:

Tour the canals of Amsterdam

Whether you are here on a layover, a few days in between other places, or for an extended vacation, no visit to Amsterdam is complete without a canal cruise. Providing a unique view of the city, a boat tour of the canals is one tourist attraction that is popular with both locals and tourists, old and young folks alike. 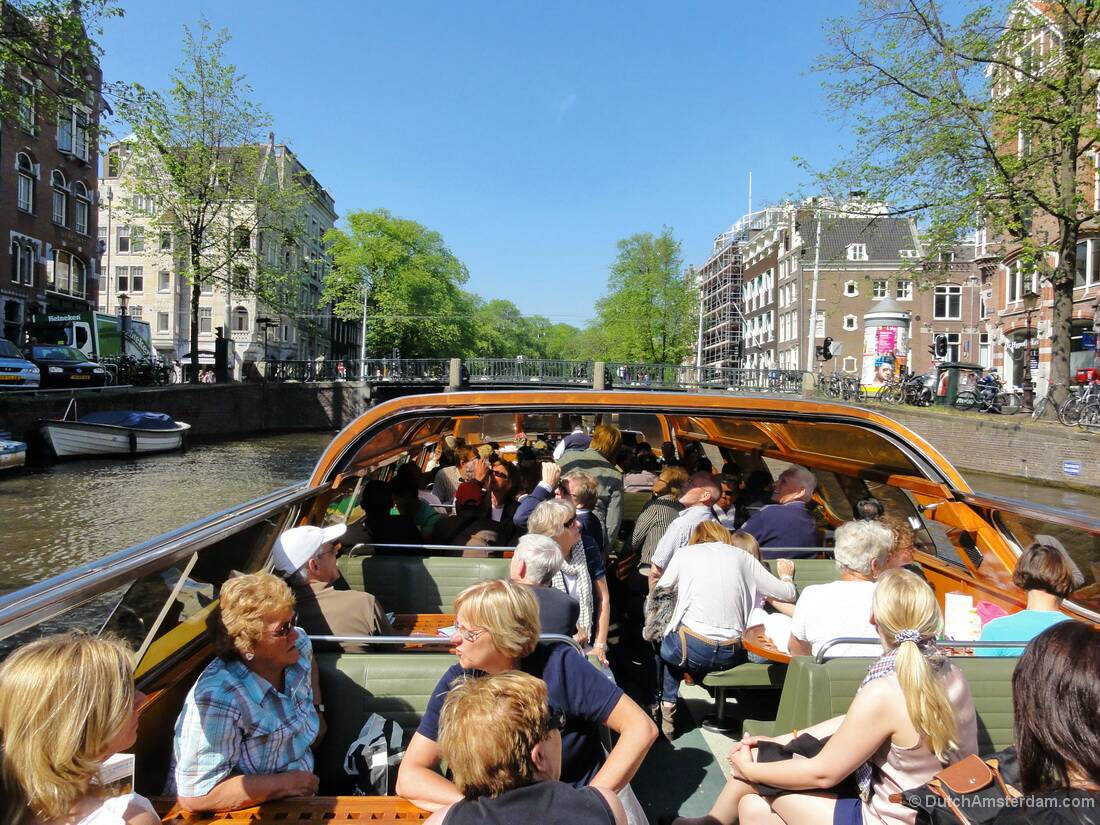 Amsterdam canal cruise: The best way to see the city

In fact, 5.5 million people a year take a ‘Rondvaart’1 (which literally translates to ‘circular cruise’).

So… visiting Amsterdam? Get off the beaten path — and take to the water!

Many people book more than one boat tour.

A daytime cruise provides an excellent introduction to the city.

Also on offer: special experiences — such as candlelight dinner-, wine and cheese-, or pizza cruises.

Combination tickets are popular as well: for instance, a cruise plus a museum visit.

Note: The traditional, glass-topped tour boats are very popular indeed. But nowadays you have other options as well, such as private- or small group cruises on smaller vessels. Check the verified customer reviews to help you choose the right tour.

Actually, here’s a good place to start: This luxury canal cruise is a GetYourGuide Original.

When you visit Amsterdam for the first time, you’ll soon realize the important role water plays in this city.

The city’s very name refers to the fact that the town expanded around a dam in the river Amstel.

Currently, Amsterdam — sometimes referred to as ‘Venice of the North‘ — has two rivers (the Amstel and the IJ) and 160 canals, creating 90 artificial islands which are connected by 1281+ bridges.

In Amsterdam’s early history, the centuries-old canals — in what is now the historic city center — served a dual purpose: 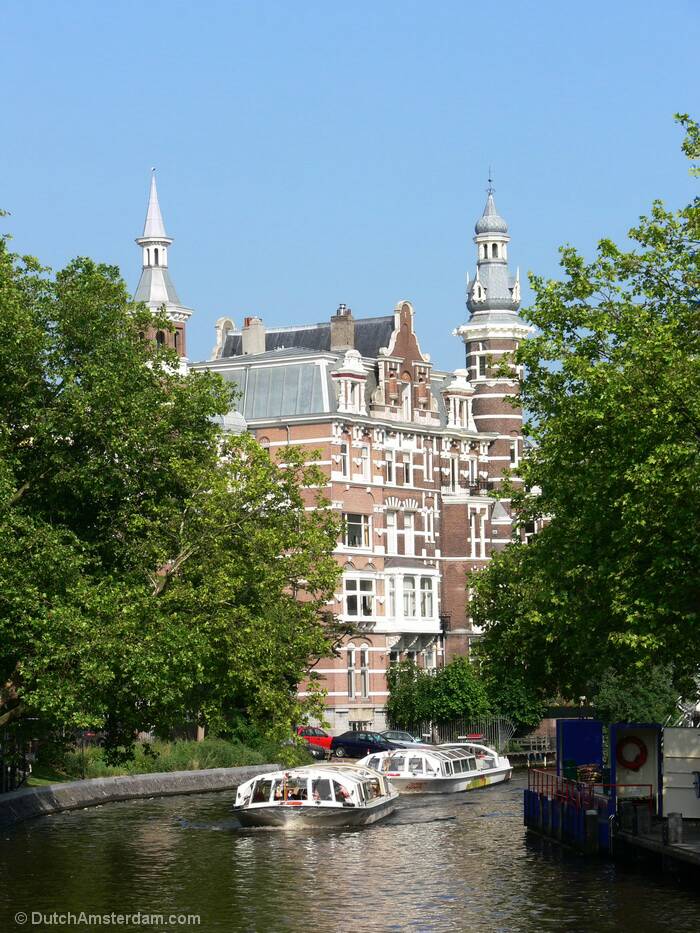 Many people book more than one boat tour

Nowadays, the 17th- and 18th century warehouses you see along some of the old canals have been turned into luxury apartment buildings.

Damrak — now the main street leading from Central Station to Dam Square — was once Amsterdam’s harbor (then known as Buitenrak), which in turn was directly connected to what was then the open sea (via an inlet now known as the river IJ).

The docks were lined with ships carrying — among other things — coffee, tea, wood, spices. And yes, slaves.

Water from the river Amstel flowed into the harbor via a sluice at Dam Square.

The square long sported a weigh house, where goods were weighed, taxed, and from there further transported to warehouses or markets. At the time the Kalvertraat — the world-renowned shopping street that runs from Dam square to Munt — was a cattle market (kalf = young cow).

Fact: Though we, the Amsterdam locals behind DutchAmsterdam, live and work here we often take canal boat tours. They’re not expensive, and they’re both fun and relaxing.

Pro-tip: We usually bring a few snacks and a bottle of water with us. Snacks and drinks sold on board are priced with a ‘captive audience’ in mind.

And we (almost) always tip the captain.

A small section of the early harbor has survived at Damrak near Central Station. (Note that the houses of Warmoesstraat arise directly out of the water.)

The tour boats you see here, at docks in front of Central Station, and at several other locations throughout Amsterdam, provide a hugely popular tourist attraction.

There are several options to sail the canals, including a Water Taxi, The Canal Bus, and various cruise + museum entry combinations.

There are a number of canal cruise tour operators. They are all fairly similar, in that each will give you a good ride through the canals and part of the harbor. The boats do take slightly different routes, and sailing times may vary as well. 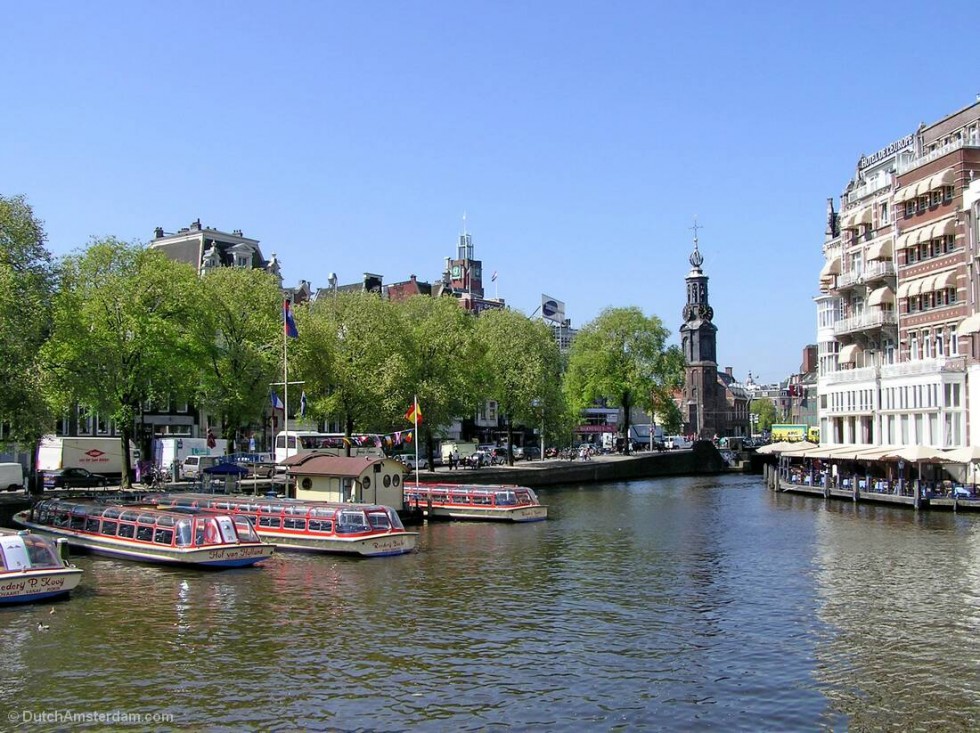 What does a canal tour cost?

Many tourists take at least one basic tour, plus one or more combination tours (e.g. cruise + on-board dinner, or cruise + museum entry ticket). These are available at a wide range of prices. There are many canals cruises to choose from.

Our recommendation? When we, the DutchAmsterdam team members, have guests we treat them to a daytime City Canal Cruise, and if possible also an Evening Canal Cruise (the latter is one we’d have to use the term ‘enchanting’ for, right?).

Should you tip the captain?

On most rides tips are solicited: when you exit, look for a saucer or captain’s cap primed with some coins. But don’t feel obligated to contribute.

In the past, most boats had on-board tour guides — often students — describing and explaining the sights. Never mind that historical facts and figures were sometimes made up on the spot and were subject to change from one ride to the next. Purists prefer the old way over the current approach in which a multi-lingual presentation is played over the sound system. 4

That said, in our experience on some rides the captain will at times turn off the sound track and instead provide on-the-spot commentary himself (which, in our estimation, is indeed worthy of a tip). 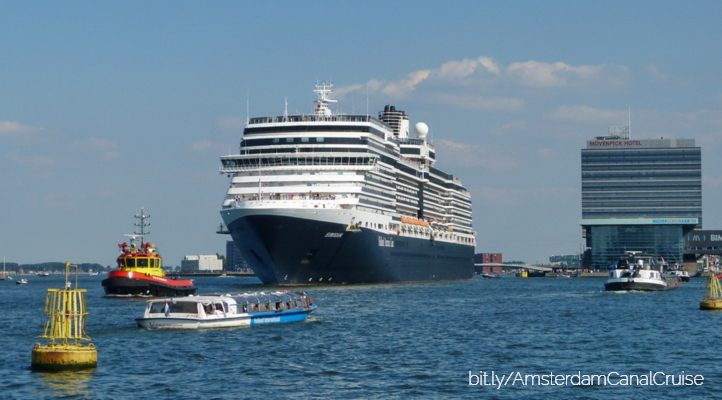 On the River IJ, an Amsterdam canal cruise boat is dwarfed by seafaring cruise ship Eurodam, of the Holland-America Line

For decades, the status quo was that the entire Amsterdam canal cruise industry was run by just a handful of companies.

The municipality is in the process of breaking up those monopolies. It is trying to get a better grip on how the waterways are used by an ever-growing number of vessels.

In short, Amsterdam strives for sustainable, balanced use of the waterways in and around the city, by all Amsterdammers and visitors.

Currently — we’re talking 2019 — the canals are traveled by over 471 vessels licensed to carry passengers for a fee. That includes anything from sloops to saloon boats, and from water taxis to the classic glass-topped tour boats.

There are at least 300 unlicensed boats that illegally ferry paying passengers around the canals. 80 of these boats are consistently rented out to large groups.

These numbers only cover commercial passenger traffic, both legal and illegal.

Also part of the mix: there are 7.000 private pleasure craft with a year-to-year license to moor in the city. Owners of these boats, as well as captains of boats merely visiting the city, pay an additional license fee for each day they sail the canals.

Then there are commercial cargo vessels.

Oh, and we’re not even talking about water bikes, SUP boards, and whatever else that floats.

The ever growing number of boats has resulted in a proportionate increase in the number of navigation movements on the canals.

On summer weekend days there are approximately 60 to 115 sailing movements per hour at busy locations, and even 130-165 per hour on the Prinsengracht. 5 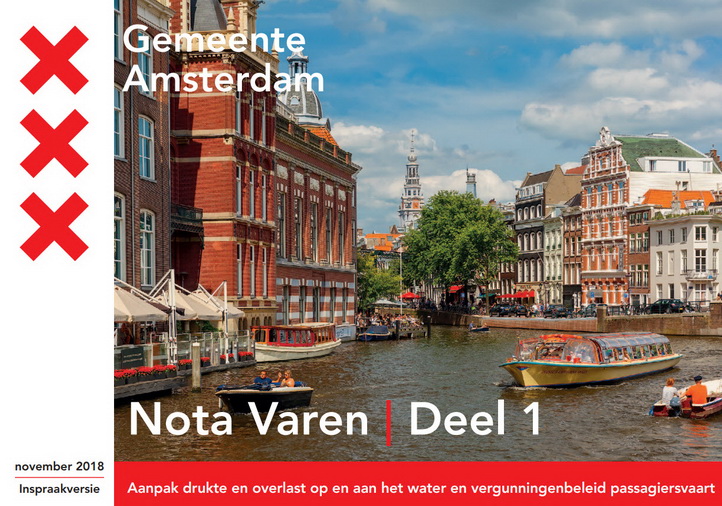 Cover of a report inviting public discussion on a proposed policy to address the increased use of Amsterdam’s canals by commercial and pleasure craft.

The city wants to reduce the illegal passenger traffic by strict enforcement of existing rules. This will create more ‘free space’ on the water. At the same time it expects to increase the number of licenses by 80 to, rounded up, 550 vessels cleared for commercial passenger tours.

Anyway, none of this will affect you as a visitor. One word of advice, though: Stick with verified tour operators. Often so-called ‘proppers’ try and entice tourists to an on-the-spot purchase of a ‘private’ (but illegal) canal boat tour. You have no recourse whatsoever if the tour turns out to be much shorter and far less impressive than promised. 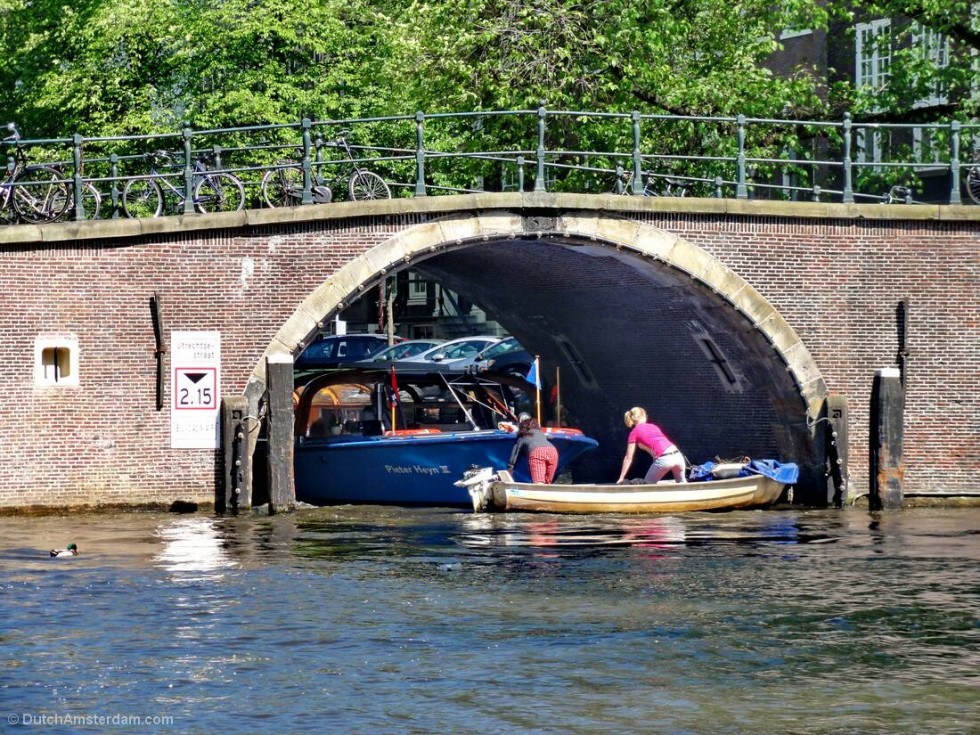 Their outboard motor out of gas, two girls try to get out of the way of a canal tour boat.

You can purchase tickets for common canal tours on the spot. Most tour boats leave at 15-30 minute intervals.

However, most visitors prefer to book a canal tour ahead of time — particular where it concerns special boat tours: for instance, an evening cruise, a dinner cruise, a pizza cruise, or a cheese and wine tour.

Also popular: combination tours, providing the boat ride with a visit to a museum.

Good to know: if a window seat is important to you don’t feel obligated to board a boat in which none are available. Simply wait for the next one. 6

Note that the configuration of tour boats differs somewhat from operator to operator, and even within the same company.

Many of the glass-topped boats are completely covered, while some sport an open roof and/or open deck — something to keep in mind if you are planning to film or take pictures.

In between stretches of overcast grey, Amsterdam weather is feast or famine — often all within the same day.

The boat trips are at their best when the sun is shining. Avoid canal trips during rainy days.

That said, during the winter a tour of the tree-lined canals provides a unique experience. With the trees bare, you’ll be able to see much more of the gabled houses.

A word of caution: If your boat has an open roof, or if you sit on an open deck, keep an eye on anybody leaning over the bridge. Not because — as one correspondent suggested — you might get to peek up a short skirt, but because an occasional lout might spit at you.

Personally we are partial to the traditional glass-topped tour boats. But nowadays there are many others options for taking an Amsterdam canal cruise. Open sloops, salon boats, even smal dinghies. With or without wine, beer, cheese or an on-board BBQ.

Check out these private or group boat tour options.

Seen Amsterdam from the water? Now see it from a bike!

Amsterdam is not just known as ‘Venice of the North’, but also as the ‘City of Bikes’.

Once you’ve seen the city from a boat, add another dimension to your Amsterdam experience by seeing it from a bike.

Enjoyed your boat ride? Next join a bike tour — or rent a bicycle