This year’s event will take place from May 29 through June 23, in all prominent theaters and concert halls of Amsterdam.

Since its founding, in 1947, Holland Festival has gained national and international acclaim. The event draws world-renowned artists, as well as up-and-coming talent. 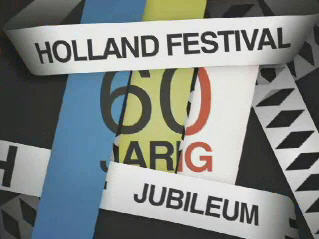 The festival opens in international spirit with LeoÅ¡ JanÃ¡Äekâ€™s opera From the House of the Dead (Z mrtvÃ©ho domu). The opera will be conducted by Pierre Boulez and directed by Palme dâ€™Or winner Patrice ChÃ©reau. The cast includes international top soloists, the Mahler Chamber Orchestra and the Arnold SchÃ¶nberg Chor. From the House of the Dead is a co-production between the Holland Festival, the Wiener Festwochen, La Scala in Milano, the Aix-en-Provence Festival and the New York Metropolitan Opera.

To mark the Holland Festival’s 60th anniversary, the festival has invited the Nederlands Dans Theater to perform Shoot the Moon in the Westergasfabriek in Amsterdam. Headstrong choreographer duo Paul Lightfoot and Sol LÃ©on will take on the unique space of the former Zuiveringshal. Jonathan Harveyâ€™s opera Wagner Dream, about final days of the maestrosâ€™ life, will also take place in the Westergasfabriek.

Do a Jazz quartet and a symphony orchestra really go together? The Koninklijk Concertgebouworkest (Royal Symphony Orchestra) takes up the challenge and joins with â€˜livinâ€™ legend in jazzâ€™ Wayne Shorter in a spectacular program for the Holland Festival. Besides the legendary saxophonist himself, guest soloists include members of the Wayne Shorter Quartet. Both orchestras will be under the direction of conductor Markus Stenz.

One of the most talked about modern dance troupes in the United States, the Mark Morris Dance Company, will perform in the CarrÃ© theatre. Het Nationale Ballet has put together a special program for the anniversary edition which will also include new works by the American choreographer.

A much anticipated performance of a different kind takes place on Saturday, June 3rd, as photographer Spencer Tunick uses Amsterdam as the setting for one of his ‘installations‘ (art projects in which Spencer Tunick captures nude figures through film and video, with public space as his decor).

All in all there will be some 80 performances.

This year, a ticket to a Holland Festival event — if bought from the Holland Festival Ticket Service — also gives you access to free public transport on all of Amsterdam’s tram, bus, and metro lines.

The tickets will be valid for public transport from 3 hours prior to a scheduled event and for 4 hours after the event’s commencement. At night: 3 hours prior to the event, and up till the last bus, tram, or metro rides (which take place around midnight). The tickets are not valid on the nightbuses.

Category: EventsLast updated: Wednesday, May 18, 2011 at 11:06 AM, Central European Time (CET)
Transparency:
The DutchAmsterdam website includes affiliate links. That means we get a small commission — at no additional cost to you — for each purchase you make. Your support helps us provide this site free of charge. Naturally, as our Editorial Policy states, our content is never influenced by our advertisers or affiliates.