Dutch media report the damage may have been caused by a mortar shell.

The explosion left a small hole in the outer wall of the building’s third floor. 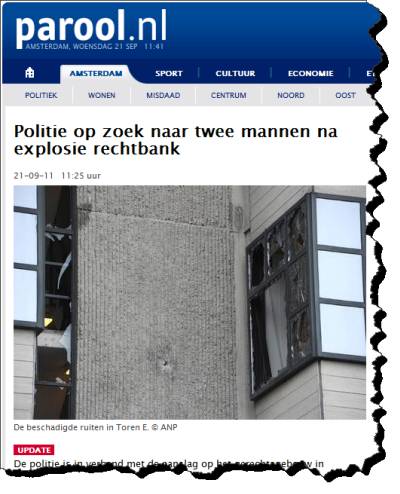 The explosion caused windows on seven floors of the building to break. Nobody was injured.

Court officials and the Amsterdam police are in the dark as to the motive behind the attack.

Based on an eyewitness report police is looking for two men.

A man who lives in the vicinity of the building told police that after the explosion he saw two men — one running away, the other on a motor bike or a scooter.

The courthouse at Parnassusweg was the venue of the high-profile trial of populist politician Geert Wilders earlier this year. Last June he was acquitted of inciting hatred of Muslims in June.

Four years ago, the high-security courtroom in Amsterdam-Osdorp was also hit by an attack that severely damaged the building. Unknown attackers shot two explosives at the building on the first day of the trial against the criminal William Holleeder and two of his co-defendants.

Ivo Opstelten, Minister of Security and Justice, says today’s attack is an “attack on the state’s rule of law,” and promises no stone will be left unturned in the search for what happened and who the perpetrators are.