AMSTERDAM, Netherlands: Gays, lesbians, bisexuals and a large contingent of heterosexuals put on their brightest plumage Saturday, and a rainbow fleet sailed through Amsterdam’s historic canals, as the city celebrated its annual Gay Pride festival. 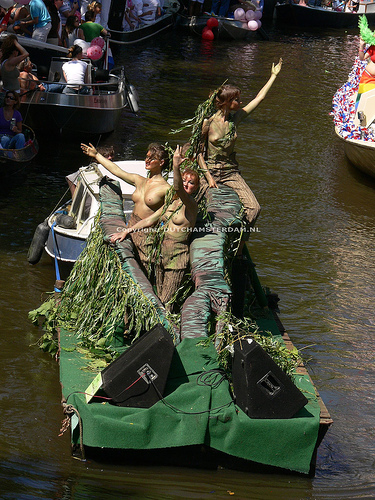 One of the more popular floats at the Amsterdam 2007 Gay Pride Canal Parade
© Copyright DutchAmsterdam.nl.
Want to use this photo?

The flotilla and party afterward is one of the biggest of the year in Amsterdam, and one in which the city upholds its reputation as one of Europe’s gayest capitals. DJs pump music from ships packed with dancing partygoers, vying for who can put on the best show or provide the most outrageous theme.

Visitors saw dozens of well-muscled men wearing leather thong underwear, cowboy hats, disco glitter, and little else. One of the boats featured a bevy of lesbian Elvis impersonators with pink coiffures. Another boat was led by a “Queen” transvestite in fantastic royal regalia; in another, lesbians in bikinis with fairy wings danced wildly; and in yet another, a “mixed” group of party people dressed all in white appeared the model of affected sophistication.

For the first time, a designated “hetero-boat” was among the more than 70 vessels officially participating. Hundreds more cruised the canals just for fun.

News reports estimated a record-breaking 375,000 to 500,000 people lined the canals to watch the boats pass, basking in the first warm weekend since summer started.

“It’s so much fun, it’s better than in Cologne, Paris or anywhere else,” said Janz Froster, who traveled from Germany to attend. “I think it’s a great opportunity to promote tolerance and anti-discrimination.”

The party took place in the shadow of a spate of gay-bashing attacks this year, which has surprised a city renowned for its tolerance.

“Gay people still can be beaten up, just like that, for holding hands or being in the wrong place at the wrong time,” he said.

Amsterdam police spokesman Gerard Vrooland said there had been 16 gay-bashing attacks so far this year, compared with 10 in all of last year. Vrooland attributed the increase to police efforts to encourage victims to come forward. 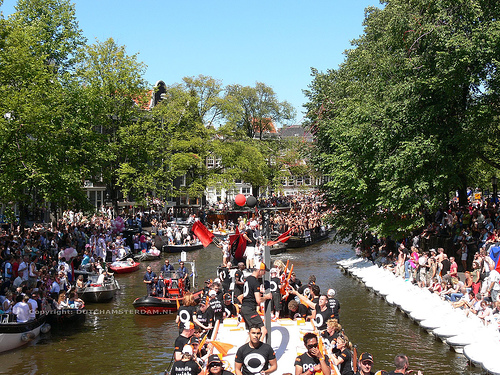 A record 72 books were part of the 2007 Gay Pride Canal Parade
© Copyright DutchAmsterdam.nl.
Want to use this photo?

Some Dutch blame Muslim immigrants for intolerance. “It’s a change, and it comes from the non-natives,” said Marianne Kalter, who said she comes from the eastern city of Zwolle to watch the parade every year. “It’s getting worse. I hope it will get better, and I think it will in maybe 20 years — but not in 10.”

Vrooland said the city has set up a 24-hour hot line for victims of gay-related hate crimes, and a network of 30 gay agents within the city’s police force helps give such complaints “the highest priority.”

“Any violent crime is prioritized, but we believe attacks based on race, religion, or sexual orientation are worse,” Vrooland said.

Elferink of the COC disputed that the rise in attacks was due to better reporting.

“People in the Netherlands think this is not a problem here anymore,” he said. “There’s a danger of complacency.”

Elferink said the COC is in talks with the country’s Justice Ministry over a new law similar to those banning convicted hooligans from soccer stadiums. If passed, the law would allow judges to bar gay bashers from approaching areas surrounding gay bars and pickup spots.

In another first, a boat for homosexual teenagers also sailed. Mayor Job Cohen initially refused a permit, arguing that underage participants were inappropriate. In the end a compromise was struck and parents accompanied their gay teens.