DutchAmsterdam.nl — It’s official: Apple Store, Amsterdam will be open for business on Saturday, March 3, at 10:00 am.

This will be the company’s first flagship store in the Benelux, and the 21st in the world. 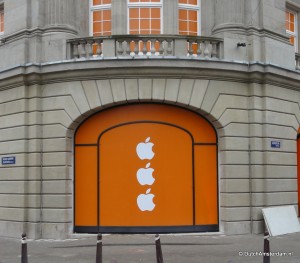 The Apple Store occupies two stories at the prominent corner of the Hirsh building at Leidseplein — one of Amsterdam’s most-loved squares, and the cornerstone of downtown Amsterdam’s top entertainment district.

Apple’s Benelux offices were moved to the building’s third floor in 2010.

The copper-domed Hirsch building originally was owned by the international fashion house Hirsch & Co. When it opened in 1912, it was at the time the largest retail warehouse ever built in The Netherlands. Aside from stores, the building also housed sewing rooms, offices, and even apartments for employees. 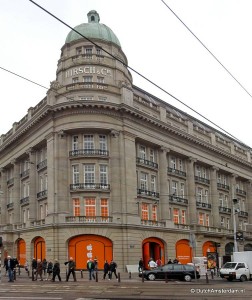 At its completion critics accused principal architect A.M.L.A. Jacot of merely copying the design of London department store Selfridges, which opened its doors in 1909. Nevertheless, the building had a Parisian ‘look and feel’ about it — aided by the fact that everything in Hirsch, personnel and signs included, was French.

The palatial building — a national monument — includes a large hall topped by a skylight and surrounded by galleries. The upper floors are reached by elevators and wide staircases. Throughout the building, precious materials such as marble, granite and exotic hardwoods have been used.

In May last year Apple’s plans for the flagship store run into trouble when construction plans showed the retailer wanted to gut parts of the landmark.

Experts were particularly upset at the vendor’s plans to add the company’s iconic spiral, glass staircase.

Eventually the municipality of Amsterdam overruled the experts, reasoning that the store would be of tremendous importance for the local economy.

There are already a number of Apple premium resellers in the Netherlands, the biggest of them — MacHouse — in the Raadhuisstraat, near Dam Square.

The authorized Apple retail stores were initially told that Apple would not directly compete with them.

The Grand Opening of the Apple Store takes place on Saturday, March 3 at 10:00 am.

After that the store is open

The store is located at Leidseplein 25, which can be reached with trams 1, 2, 5, 7 and 10. Various buses operated by GVB and Connexxion also have stops at Leidesplein.