Home > Neighborhoods > Old City Center > Canal Festival 2007: Music on and around the canals of Amsterdam

The event started on a somewhat sour note. The grand piano that had to be hoisted onto the rusty pontoon fell from its hoist, right on top of a brand-new Volvo.

Fortunately, the concert did take place. It was such a success that an encore was held a year later, and the Prinsengrachtconcert has since grown into an annual, world-renowned event, featuring national and international top musicians, soloists and orchestras. 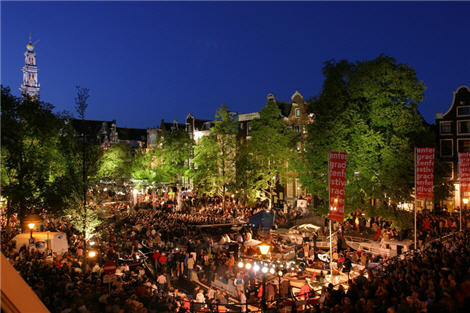 Nowadays, 20.000+ people line the canals and bridges to enjoy the nighttime concert in its unique setting: a canal flanked by a mixture of old and modern houses, overlooked by the tower of the Westerkerk, and filled with hundreds of small pleasure boats parked side-by-side around the stage — which itself still consists of dressed up pontoons.

Many people, some of whom arrive hours before the concert in order to secure a good view, bring along wine, cheese, and tapas to make the experience complete.

Since 1984, Dutch broadcaster AVRO has broadcasted the open air concert on live television. The concert has also been shown by TV stations around the world.

Over the years, the Prinsengracht concert also grew to include additional musical events, and various venues throughout the downtown canal district.

Ten years ago, this collection of additional concerts became known as the Grachtenfestival (Canals Festival).

The Prinsengracht Concert is financed, programmed and produced by the Stichting Prinsengrachtconcert, the AVRO and Hotel Pulitzer. It is always staged on the famous pontoon in front of the. The Grachtenfestival was â€˜built around it’ ten years ago. The festival programmes on a smaller scale in homes and monuments in the historical centre and along the IJ banks. Chamber music, own productions, masterclasses, Canal tours on Architecture and Monument walks, For adults and children. Classical music, water and architecture are the elements of the Grachtenfestival.
– Source: Grachtenfestival

Over the past 10 years, the Grachtenfestival has developed into one of the most spectacular classical music festivals in the world. The event will take place on 11 – 19 August 2007. For nine days over 166 concerts will take place in various locations across Amsterdam, including museums, monuments, private residences and special stages on the water.

Last year, the Canals Festival expanded to include venues along the banks of the river IJ.

A map showing all the concert locations is available here.

Many of the concerts can be enjoyed free of charge, but for some of them you nevertheless need a ticket. The festival program guide includes this information.

The events highlighted here — a small choice out of over 166 concerts — are all free:

Category: Events, Old City Center, Western Canal BeltLast updated: Wednesday, May 18, 2011 at 11:07 AM, Central European Time (CET)
Transparency:
The DutchAmsterdam website includes affiliate links. That means we get a small commission — at no additional cost to you — for each purchase you make. Your support helps us provide this site free of charge. Naturally, as our Editorial Policy states, our content is never influenced by our advertisers or affiliates.

Any cookies that may not be particularly necessary for the website to function and is used specifically to collect user personal data via analytics, ads, other embedded contents are termed as non-necessary cookies. It is mandatory to procure user consent prior to running these cookies on your website.