DutchAmsterdam.nl — Devoted to modern art from the mid-19th century to the present day, the Stedelijk Museum is one of the world’s leading modern art museums.

It serves as Holland’s national museum for modern and contemporary art.

The Stedelijk Museum — literally ‘Municipal Museum’ — was founded in 1895. Most guidebooks state that the museum has 25,000 objects in its collection, but in reality there currently are 90,000 drawings, graphics, paintings, photographs, sculptures and videos. 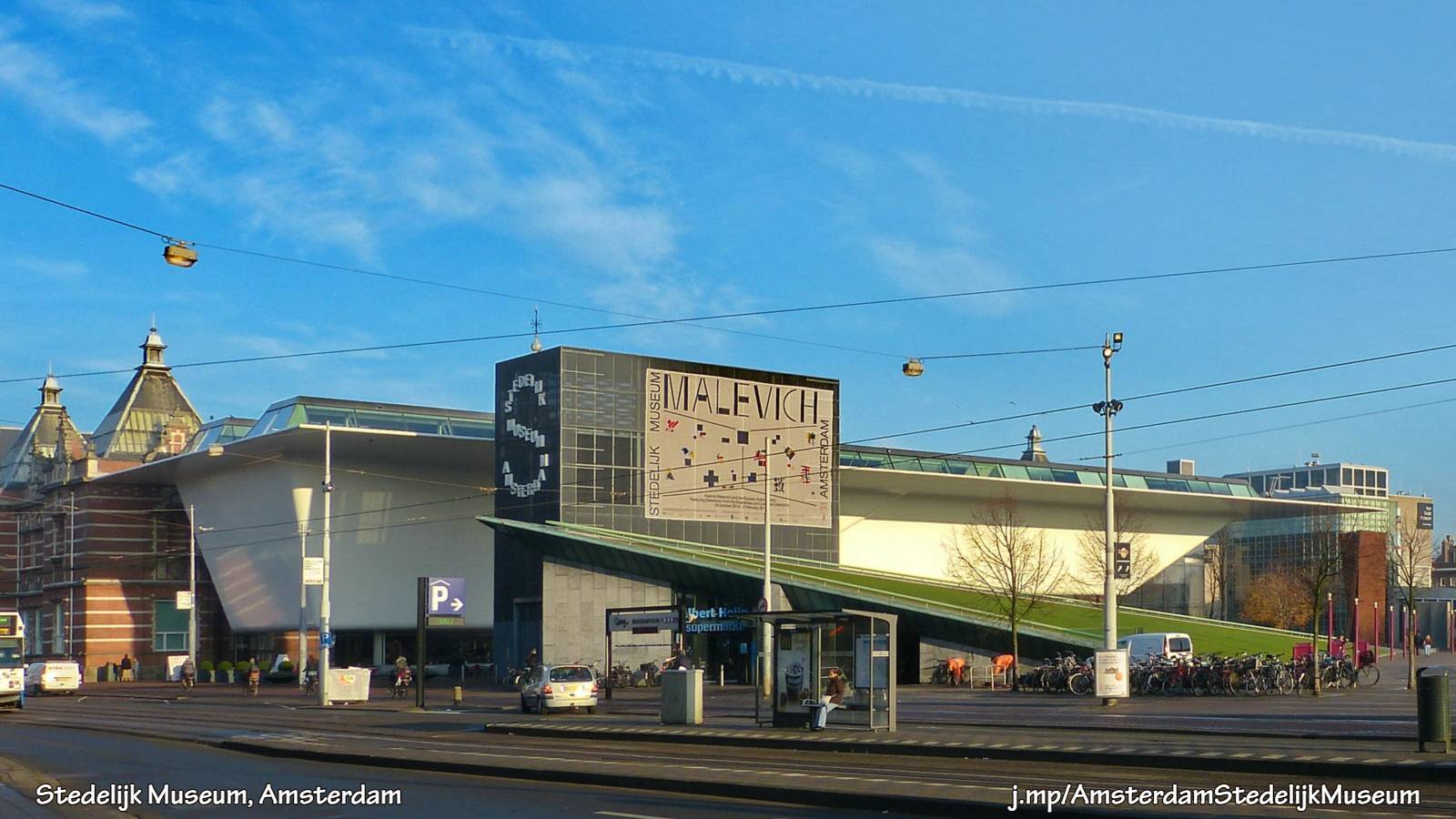 Devoted to modern art from the mid-19th century to the present day, the Stedelijk Museum is one of the world’s leading modern art museums.

Mind you, not everything is on show at the same time. Even after the museum reopened — in September, 2012 — there wasn’t be enough space to do so.

That said, aside from the permanent collection the museum also presents special exhibitions, with an issue of the Lonely Planet guide stating that some people will view these installations as ‘pretentious nonsense while others will be ecstatic.’

All guides agree that the high point is the museum’s collection of works by Russian artist Kazimir Malevich and the De Stijl movement. In his Cardogan Guide to Amsterdam, Rodney Bolt says, “Side by side, these two collections show how abstract art began and we see the gradual disappearance of any reference to outside reality.”

Sandberg built up the museum’s collection and held a series of notable — and often controversial — exhibitions, including the first COBRA showing (Cobra being a group of artists from Copenhagen, Brussels and Amsterdam). Reportedly their colorful collection of childlike paintings was the first to provoke the comment that ‘a three-year-old could do better.’

Why does the Stedelijk Museum’s entrance look like a bathtub?

The museum started out in a beautiful neo-Renaissance building. When more space was needed an ugly new wing was added in 1954. (‘Ugly’ is relative, of course, but many Amsterdammers will tell you in no uncertain terms that they were not enamored with the extension. That said, they may soon beg to have the extension restored to its old glory. The newly renovated museum now features what can only be described as a grossly over-sized bathtub above its new entrance).

[E]ntering an oversize plumbing fixture to commune with classic modern art is like hearing Bach played by a man wearing a clown suit.

Why a tub? That’s the $170 million (well over budget) question. Benthem Crouwel, the Amsterdam firm that designed it, hasn’t explained.

Personally I’m thankful that the author, Michael Kimmelman, also had this to say about the cement wall with which some idiot defaced the nearby Van Gogh Museum

A horrific addition to the Van Gogh Museum by Kisho Kurokawa, a Japanese architect, forced on Amsterdam by Japanese patrons of the museum, added a major eyesore and wreaked havoc on that part of the plaza.

I fully appreciate that art is in the eye of the beholder, but I think that people who foist this kind of craziness upon our beautiful city should be tarred and feathered, or perhaps even locked up.

Speaking of which: the Stedelijk Museum closed in 2004 for renovation and expansion work. It was supposed to re-open in the summer of 2009. But there were countless delays and cost over-runs, and now the museum is scheduled to open again on Sunday, September 23, 2012. Total cost: 127 million Euro, 20 million more than estimated.

Artist’s impression of the new building.

Building work actually finished at the beginning of February, but regulating the climate control system in both the old- and new parts of the museum will take several months.

During the reconstruction phase, the museum put on a series of temporary exhibitions at various venues throughout Amsterdam.

The Stedelijk Museum is located in the Museum Quarter, an area of town that also includes the Rijksmuseum, the Van Gogh Museum (right next to ‘het Stedelijk’ — as many Amsterdam locals refer to it), and the equally world-famous Concertgebouw.

ADDRESS
Paulus Potterstraat 13 — The red marker on the map. The yellow marker is the Van Gogh Museum, the purple one the Rijksmuseum. The blue market indicates Leidseplein.

The museum is within walking distance (15 minutes) of Leidseplein, and is easily reached by public transport.

Note: No selfie sticks are allowed inside the museum.

Other Museums in Amsterdam

Amsterdam has dozens of museums to suit all tastes and interests.

Many people combine a visit to the Stedelijk Museum with visits to either the Van Gogh Museum and/or the Rijksmuseum. All three museums are situated on the same square, Museumplein (literally, ‘Museum square’).