DutchAmsterdam.nl — People with a foreign background and those whose families are rooted in Amsterdam will, if the current trend persists, increasingly live in segregation from each other.

Moroccans, in particular, have the tendency to prefer neighborhoods with a high concentration of other Moroccans.

So says O+S, Amsterdam’s municipal Department of Research and Statistics, in a report about the housing preferences among young people. 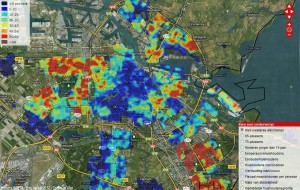 The report highlights significant differences between the preferences of autochthonous and allochthonous people groups.

The report says Moroccan youth are, in principle, willing to live in any of Amsterdam’s boroughs — with the exception of Zuidoost.

However, since they have a clear preference for ‘colored’ neighborhoods, large parts of the city center and south are out of favor.

https://www.youtube.com/watch?v=VlqoQCQHaMM
Amsterdam’s De Pijp district is home to a melting pot of cultures

Autochthonous youth prefer to live within the A10 ringweg (literally, ringroad — referring to the highway that circles much of Amsterdam).

“There simply exists a pattern in the city in which Turkish and Moroccan Amsterdammers choose for Nieuw-West, whereas Surinamers pick Zuidoost,” says Jeroen Slot, Deputy Director for O+S.

“That pattern perpetuates. That does not have to be a bad thing, as long as the city provides other opportunities for people to mingle. Otherwise there is no balance between avoiding and encountering and you end up with a collection of disjointed areas instead of a city.”

Citing the report, Amsterdam daily Het Parool says that all Amsterdam youth would like to live in a mixed neighborhood, though they are more likely to move to a white area. Thirty percent of this groups says they want to have more autochthones in the neighborhood.

Among Moroccan youths 22 percent want to see more allochthonous people in their district. 15 percent of Turks and 13 percent of Surinamers want that as well.

The report also says that segregation does not only have to do with ethnicity. For instance, higher-educated allochthonous youth mirrors the preferences of their autochthonous counterparts.

Footnote
* The graphic shows a screenshot of a Google map on which NRC.nl has projected data provided by CBS, the Netherlands Central Bureau of Statistics. The map was published February 14, 2012.

Do you know how many nationalities are represented in Amsterdam?