DutchAmsterdam.nl — Amsterdam belongs to the European capitals with the highest per capita number of murders and other unnatural deaths.

In a report by Eurostat, the statistics service of the European Union, Amsterdam ranks in fourth place with 3.65 homicides per 100.000 inhabitants. Vilnius, Lithuania heads the list (7.90), followed by Talinn, Estonia (6.03), and Luxembourg, Luxembourg (4.24). 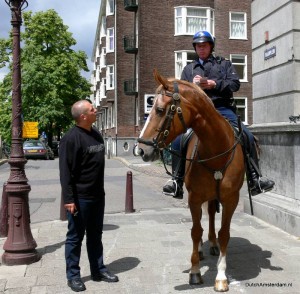 Most crime is Amsterdam is of a less serious nature. Here a motorist argues with a police man who tickets him for driving the wrong way. The horse is paying more attention than the cop is...

The Netherlands ended in 11th place with 179 murders.

In its report, titled, “Crime and Criminal Justice, 2006-2009,” Eurostat says, “Homicide is a type of violent crime, and is defined as the intentional killing of a person, including murder, manslaughter, euthanasia and infanticide. It excludes death by dangerous driving, abortion and help with suicide.”

Over the past decade a revenge-war amongst some of Amsterdam’s top criminals has resulted in a number of assassinations.

Amsterdam’s Bureau of Research and Statistics, O+S shows the following number of homicides per year:

Amsterdam has a population of 780.559 inhabitants.

Amsterdam a good place to live 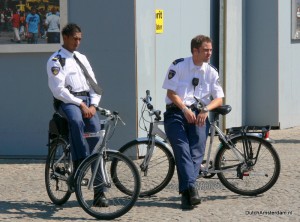 And in the most recent Mercer’s Quality of Living index, published last September, Amsterdam ranked 12th in a list of the world’s most livable cities.

Mercer evaluates local living conditions, which are then are analysed according to 39 factors grouped in 10 categories, including the Political and social environment, the economic environment, and the Socio-cultural environment (censorship, limitations on personal freedom, etcetera).

Luxembourg topped the personal safety ranking, followed by Bern, Helsinki and Zurich – all ranked at number two. Vienna ranked fifth, while Geneva and Stockholm both ranked in sixth place. Baghdad (221) is the world’s least safe city (and also came in last in the list of most livable cities).