DutchAmsterdam.nl :The price of Nederwiet — Dutch Cannabis known for its high potency — has risen by 20 percent in the past year.

At the same time, the amount of THC (tetrahydrocannabinol – the main psychoactive substance found in the Cannabis plant) has dropped from 17.5 to 16 percent. In 2004, Dutch-grown Cannabis boasted a mind-blowing THC content of more than 20 percent. 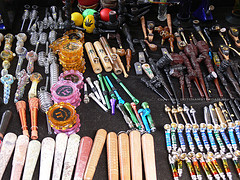 Soft drugs paraphernalia sold at an Amsterdam fleamarket.
© Copyright DutchAmsterdam.nl. Want to use this photo?

The average price of Nederwiet (Neder = abbreviation of Nederland, Netherlands; wiet = dutch pronounciation of weed) is now €7,30 per gram.

These numbers were revealed in a press releases by the Trimbos Institute — the Netherlands Institute of Mental Health and Addiction — which since 1999, at the request of the Ministry of Health, Welfare and Sport, monitors the strength of Cannabis products sold in Holland’s coffeeshops.

According to the institute, imported Hash has also become more expensive, while the amount of THC current is 13.3 percent, versus 18.7 percent in 2006. The average price of imported hash rose from €7,30 to €7.70 per gram.

The price increase for Nederwiet appears to be a direct result of intensified police raids of illegal growing operations in rental homes.

While not directed at small-time home growers — (in Holland one may legally grow five marijuana plants per house) — law enforcement has stepped up detection of professional weed farms set up in homes rented for the purpose by criminal gangs.

Methods used to detect such operations include checking rental records, and looking into above-average electricity and water usage. In recent months several home-based weed farms have been detected from the air. Using a helicopter, police officers take heat-sensitive pictures of various neighborhoods, looking for tell-tale signs of growing operations.

When caught, growers can expect hefty fines, as well as the loss of their rental home. Many of the more professional illegal growers have reportedly moved their operations to Belgium and Germany.

Imported hash, primarily from Morocco, suffers from a poor harvest and closer police scrutiny. According to the Trimbos Institute THC values may have dropped due to changes in the climate.

Illegal but not illegal

In Holland, coffeeshops are allowed to sell soft drugs under the typically Dutch concept of gedogen. The term is used of a situation or activity that technically is illegal, but which is actively tolerated as a matter of government policy — since everyone knows the issue (such as the use of soft drugs) cannot be legislated away.

Technically, however, it remains illegal for a coffeeshop to buy soft drugs. As the saying goes, “the front door is legal, but the back door is illegal.”

Diminished supply and higher prices could result in growers selling ‘dirty’ Cannabis — cut with sand dust and other materials. Such dirty Cannabis has recently been found in some countries neighboring Holland.

Therefore the Trimbos Institute has researched whether Cannabis currently sold in Netherlands coffeeshops is contaminated with additives. In its recent tests, no such additives have been found.

See Also:
 Coffeeshops and Coffeehouses
 Are Amsterdam’s coffeeshops about to disappear?