DutchAmsterdam.nl — In Amsterdam it is once again legal to drink alcohol while standing at a café terrace.

Table of Contents hide
1 Civil Disobedience
2 Not yet legal

The city is nixing the local bylaw that banned this activity. 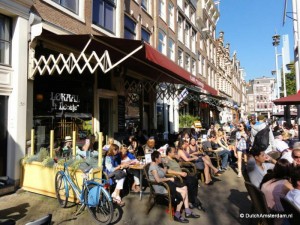 Café 't Loosje at the Nieuwmarkt

Maintaining the rule is no longer a priority, a spokeswoman for the Municipality says.

Mayor Eberhard van der Laan made the decision as a step in the city’s efforts to relax the rules governing the hotel and catering industry.

The ban on drinking while standing at outdoor cafés was initially introduced in order to curtail noise nuisance.

In this city cafés, shops and restaurants are situated right in the middle of residential neighborhoods, often sharing small sidewalks. 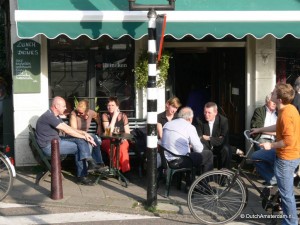 Café Kalkhoven, at the corner of Prinsengracht and Rozengracht

There are strict rules as to how much space a terrace can occupy, designed to stop patrons from blocking people’s front doors, taking over the entire sidewalk, or spilling out into the street.

The Mayor’s approach is simple: the fewer rules, the easier it is to focus on compliance.

Under the new approach the municipality expects café owners to combat noise nuisance themselves, in cooperation with the immediate neighborhood.

In practice cafés have not been fined for drinking beer while standing at a terrace since August 2009, when former Mayor Job Cohen told an action group he would tolerate the practice.

The pressure group had organized a civil disobedience protest at Noordermarkt, a popular square in the Centrum borough, in response to that borough’s heavy-handed enforcement of a plethora of smothering rules.

Thousands of Amsterdammers showed up for the good-natured demonstration.

It is not known when it will actually be legal to drink beer while standing.

The city’s spokeswoman says it will take some time to remove the prohibition from the local by-laws (Algemene Plaatselijke Verordening).

Meanwhile neither customers nor café owners will be fined if anyone is spotted drinking a beer while standing.

Mind you, if customers do create a nuisance, for instance by being excessively noisy or by blocking the sidewalk, the café’s proprietor has the right to ask them to stop doing so — and to demand that they leave in case they refuse to comply.

An Amsterdammer last updated this post on Wednesday, March 20, 2013, at 9:11 AM CET (Central European Time)