If you have ever photographed “Amsterdam’s oldest house” — at Begijnhof — you’ll have to change the caption.

In June, 2012 the city discovered an even older house, this one located in Warmoesstraat — a street at the edge of the Red Light District in one of the oldest parts of town. 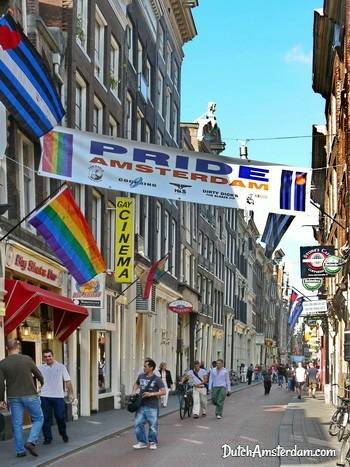 The 530+-year-old house has a rather boring facade dating from the 19th century, which is why the building escaped attention until a few years ago.

In 2010 the building, which housed a bar and a restaurant, was hit by fire.

Later the owner requested a permit to build apartments.

An inspector who visited the building in March, 2012, noticed that the blackened wooden beams looked quite old.

He alerted the Bureau Monumenten & Archeologie (bMA) (Their own translation: ‘Municipal Department for the Preservation and Restoration of Historic Buildings and Sites’).

Subsequently samples of the wood were taken for dendrochronological research. Dendrochronology or tree-ring dating is the scientific method of dating based on the analysis of patterns of tree-rings.

The samples were sent to a laboratory in Berlin, where it was determined when the trees were felled. 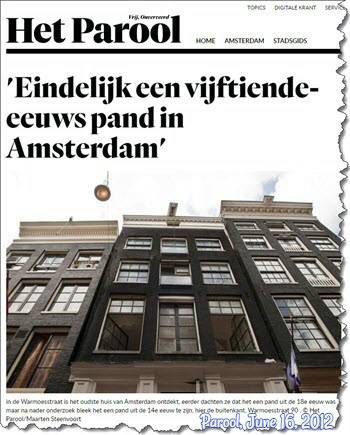 Dating back to 1485, Amsterdam’s oldest house is hidden behind a 19th-century facade. Screenshot Het Parool, June 16, 2012. “Finally a fifteenth-century building in Amsterdam,” the headline declares.

You add a few years because the wood had to be transported and sold, but on the basis of the lab report the wooden skeleton of the house located at Warmoesstraat 90 was officially dated to be from 1485.

It is interesting how complete the wooden skeleton has been preserved, Gabri van Tussenbroek, architectural historian with the bMA, told local newspaper Het Parool.

“The Houten Huys [the wooden house at Begijnhof, which dates to about 1528 — DA1] was substantially renovated in 1957, and in the process a lot has been lost. But in this building even the roof still dates to the fifteenth century.

“These buildings tell us a lot about the way they used to build houses in the fifteenth and sixteenth centuries.

“You can see that the beams have been marked with carves. Thus you can deduce that the skeleton was built at another location and assembled here: just like an IKEA DIY packet.” 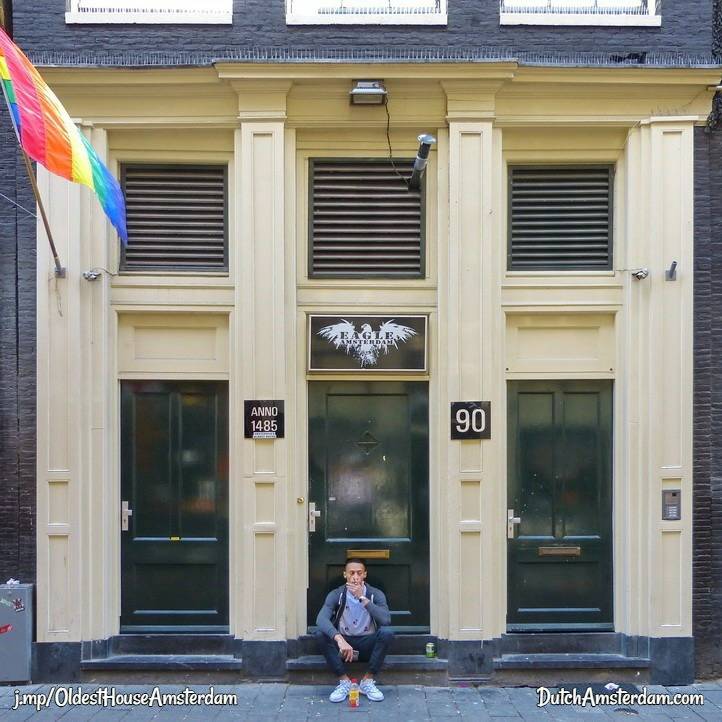 Alderman Boudwijn Oranje, whose portfolio includes housing, says, “Urban building at that time was so clever and durable. We can learn a lot from it: these kind of buildings have lasted for centuries while during the past few decades shopping centers have been build that after just fifty years are ripe for demolition. 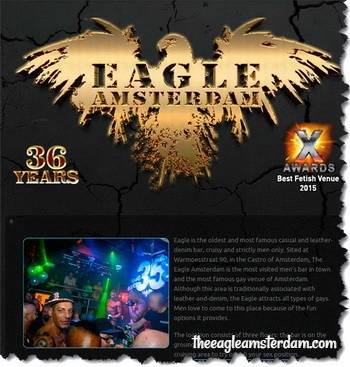 For the past 35+ years, the building has housed Eagle Amsterdam, the city’s oldest and most famous gay venue:

“[C]asual and leather-denim bar, cruisy and strictly men only… The Eagle Amsterdam is the most visited men’s bar in town and the most famous gay venue of Amsterdam.”

Despite its age, the house is not included on the list of national monuments.

That is because the first selection criterion is the appearance of the facade.

In this case the facade, which dates back to the 19th century, is much younger and is not spectacular, says Gabri van Tussenbroek, construction historian with the Bureau Monumenten & Archeologie.

It is around the corner from the Oude Kerk, the Old Church, which is the city’s oldest building.

Expanded many times during its history, portions of the Old Church date back to the second half of the thirteenth century.

While church services are still held every Sunday, the building is currently in use as an exhibition venue.

If you’re not all that impressed by the oldest house, rest assured that you will enjoy a visit to the church. Regardless of which exhibition is on show, the building alone is well worth your time.

An Amsterdammer last updated this post on Wednesday, January 11, 2017, at 8:20 AM CET (Central European Time)