Table of Contents hide
1 Damrak: Feast or Famine
2 What does ‘Damrak’ mean?
3 From Gaudy Tourist Trap to Red Carpet
4 Monuments
5 A Monument to Stubborn Determination
6 Historic harbor, or what’s left of it
7 Map of Damrak
8 Hotels at or near Damrak

Damrak is the main street that leads from Central Station to Dam square — the center of Amsterdam.

Damrak is feast or famine. On the one hand it’s home to utterly forgettable tourist traps like the ‘Sex Museum,’ the ‘Medieval Torture Museum,’ and cheesy cheese shops Amsterdammers abhor. Not to mention the hole-in-the-wall fastfood and tourist tat outlets.

On the other hand there are nearly two dozen buildings designated as monuments. There’s the old stock exchange, which nowadays hosts a wide variety of cultural events. Closer to Dam square the huge, prestigious Bijenkorf warehouse attracts bustling crowds of locals and visitors alike.

From the tour boats near Central Station to the interesting architecture along the way, the good features of Damrak look like a preview of what Amsterdam has to offer.

What does ‘Damrak’ mean?

The name of the street refers to the dam in the river Amstel (hence, Amsterdam) on the site of what eventually became Dam square.

Rak is an old Dutch term for a straight canal or river. Until 1672, when most of it was filled, Damrak was Amsterdam’s busiest canal. Ships were docked along its quays — all the way up to Dam square — to unload, and take on board, goods from all over the world.

At the time, the northern end of Damrak ended in the city’s open harbor front, which was the gateway to the Zuiderzee (South Sea), and from there to the North Sea. The train station wasn’t built until the 1880s. 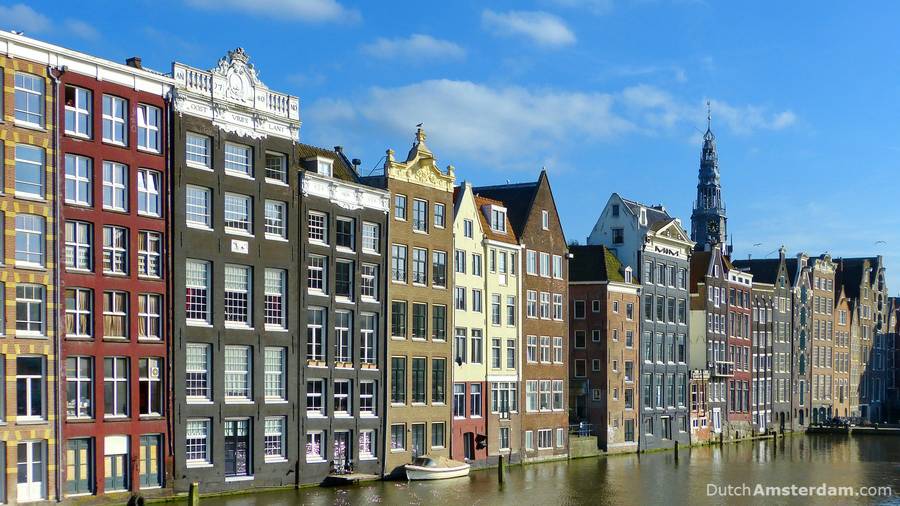 Over the past few years Damrak has been undergoing a slow but steady metamorphoses. As part of Project 1012 — a long-term effort to clean up and make over all of central Amsterdam — shady businesses associated with crime families have been forced to close, others businesses have been told to clean up their act (as was the case with, for example, a ‘Hooters’ knock-off), and a proliferation of illegally-placed advertisements have been removed.

The street also benefits from a project that makes it part of a ‘Red Carpet’ designed to draw tourists deeper into the city.

Aside from Damrak the Rode Loper route includes Rokin, Vijzelstraat, and Ferdinand Bolstraat in ‘De Pijp” — the lively part of the South borough — and beyond. 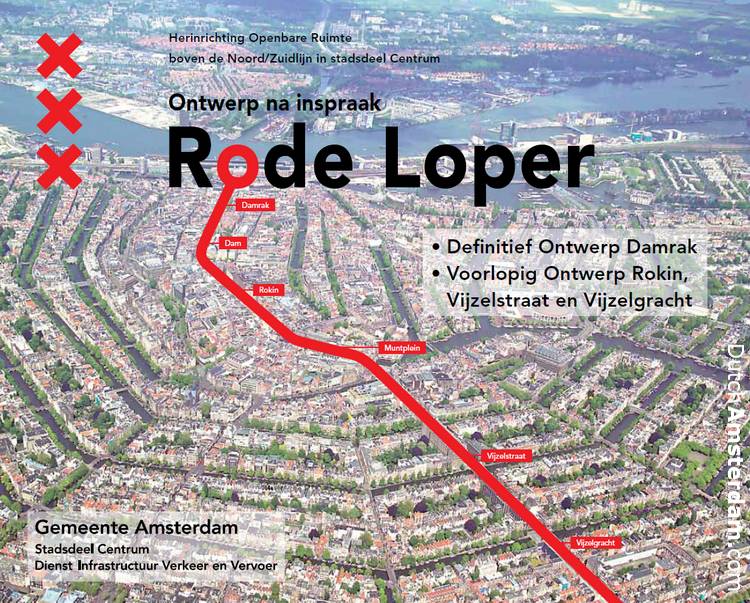 It isn’t quite there yet, as you’ll still encounter an overabundance of souvenir shops, so-so bars and eateries, and money changers best avoided. [Be sure to see our tips on where to exchange your currency in Amsterdam, which will potentially save you lots of dough.]

Still, the clean-up work is in full swing, and the effects are already noticeable.

Illegal hostels — some of which had dozens of floor-only sleeping places in crowded rooms with little or no regard for safety — have been closed. Squatters have been evicted from various buildings, and overly gaudy and evasive advertising signs have, for the most part, been removed 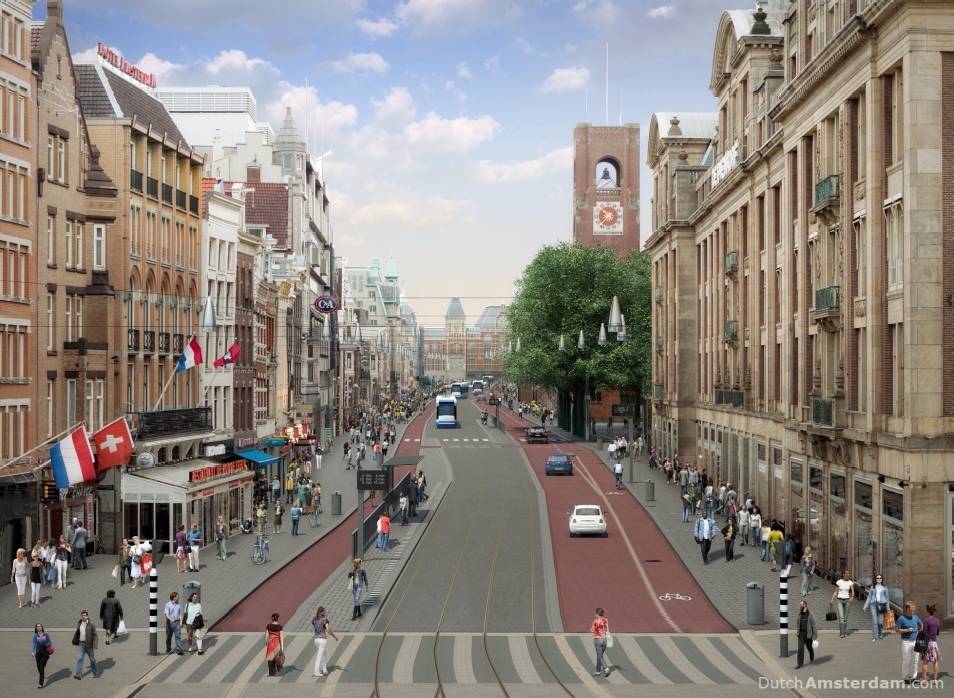 Artist’s impression of how Damrak will look when the ‘Red Carpet’ makeover is completed. In the right-hand foreground, the Bijenkorf warehouse. The bell tower is part of the old stock exchange building. In the distance is Amsterdam Central Station

And to the relief of many Amsterdammers the bizarre streets lights — which appeared in 1991 as part of a policy that insisted some street furniture should be designed as ‘expressions of applied art’ — have been removed. It is telling that even the Efteling, Holland’s favorite fairy-tale park, had no interest in the fixtures.

Meanwhile, Damrak’s stretch of the controversial North-South metro line has been constructed underneath the Bijenkorf, the old stock market. [The new metro line — Noord/Zuidlijn, Metro 52 — was opened in July 2018]

It pays to ignore the tat-touting ‘souvenir’ stores, the fast-food joints and the odd ‘museums.’

Instead look up. Better yet, cross the street to the sidewalk along the former stock market building — the Beurs van Berlage. Then look to the other side and notice the unique buildings.

Damrak is home to 23 buildings designated as Royal Monuments. They date from the 18th to the early 20th century, and include the old stock exchange (Beurs van Berlage), built between 1898-1903 and the Bijenkorf warehouse, built between 1911 and 1914.

When the stock exchange building — the huge colossus, brown stone colossus — was unveiled in 1903 it met with much derision.

Meant as a counterpoint to the architecture of the Central Station, the building was modern for its time. Many viewed it as out-of-context with the rest of the area. Nowadays it is considered a key work of the period, and the ‘Beurs van Berlage’ is almost universally admired. 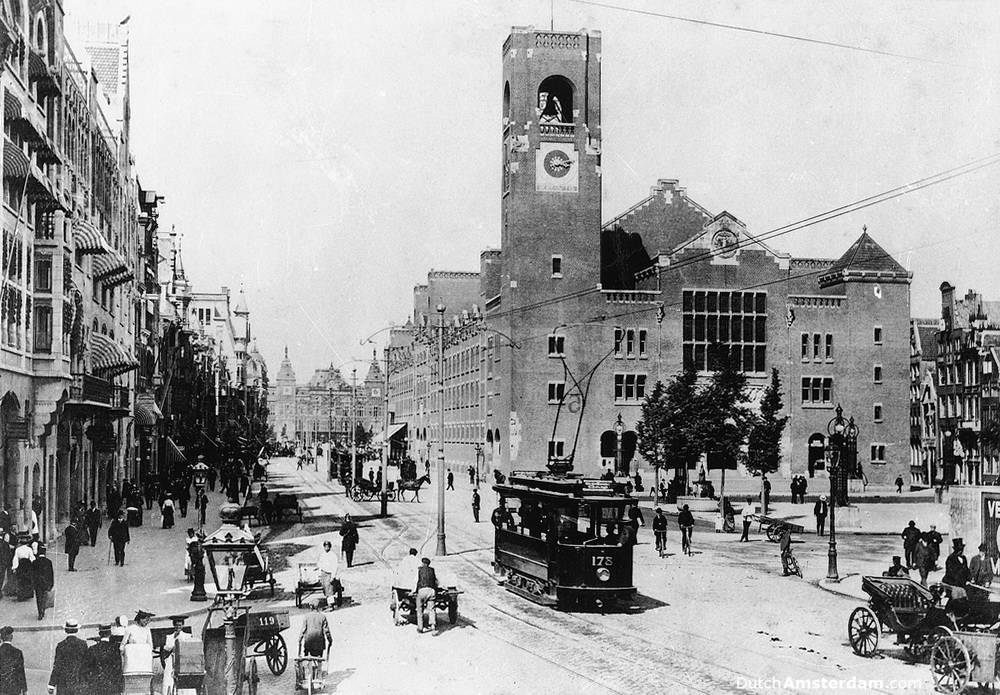 The Beurs van Berlage was last used, as an options market, in 1987. Since then the building has become a cultural center, hosting concerts, exhibitions, lectures, conferences, and more. The northern part of the building (closest to Central Station) is used by the Netherlands Philharmonic Orchestra and its offices.

Meanwhile, the current stock exchange, Euronext, is situated at Beursplein 5 (the square between the Beurs van Berlage and the Bijenkorf).

A Monument to Stubborn Determination

At the Corner of Damrak and Prins Hendrikkade, straight across from Central Station’s main entrance stands the monumental Victoria Hotel (as every Amsterdammer refers to it, even though its official name nowadays is Hotel Plaza Victoria Amsterdam). It was built between 1882 and 1890 in typical 19th century neostyle.

But what catches the eye before you cross the street is that just to right of the hotel’s main entrance, two tiny 17th century houses appear to defy the imposing building. 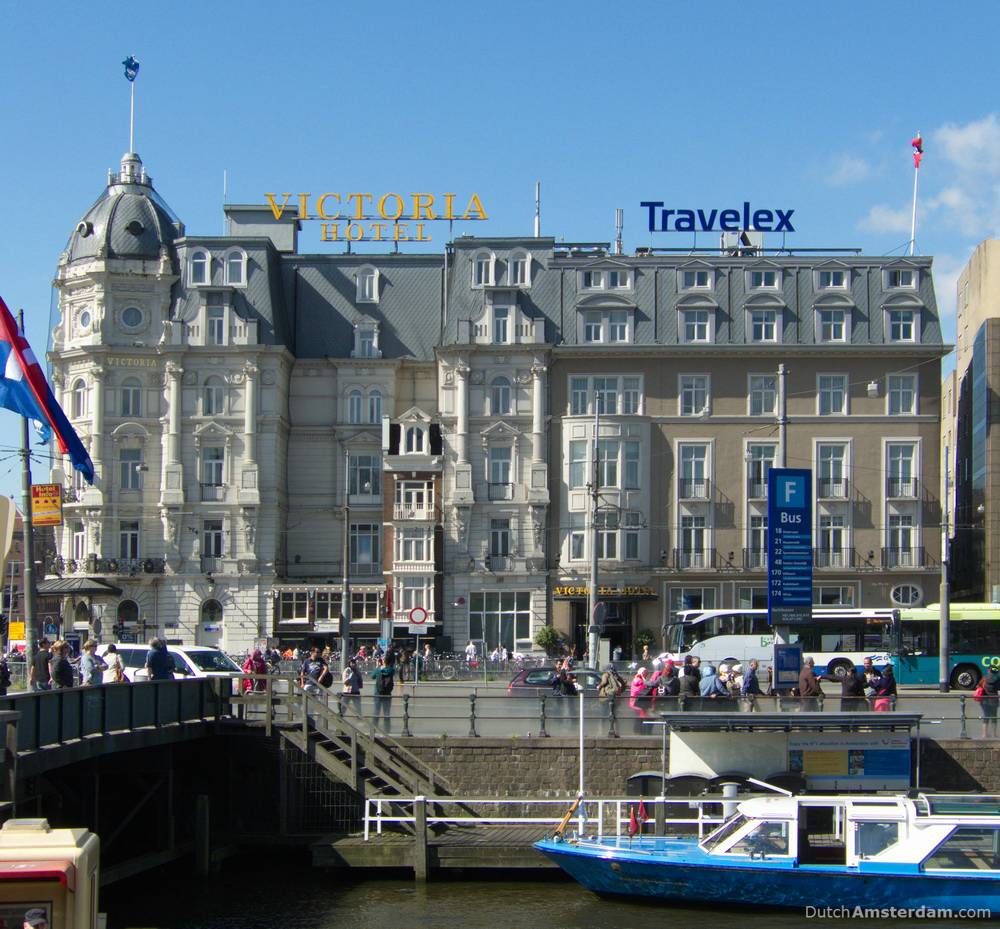 The Victoria Hotel, at the corner of Damrak and Prins Hendrikkade, is built around two houses — one tall, one short (look underneath the hotel’s sign)

Indeed, the hotel was built around them, due to the fact that the owners weren’t interested in selling out to the developer — even though they had been offered a huge sum of money.

Another version of the story says that the owners did want to sell but kept holding out for more money, thinking that the developers could not get around paying them exorbitantly-high buyout fees.

But the developers had already bought five houses at Damrak and three at Prins Hendrikkade for far less, and decided to simply get around them another way.

Historic harbor, or what’s left of it

Before you reach the Stock Exchange you’ll see a body of water. This is all that remains of the erstwhile harbor. It is officially known as Natte Damrak (Wet Damrak). 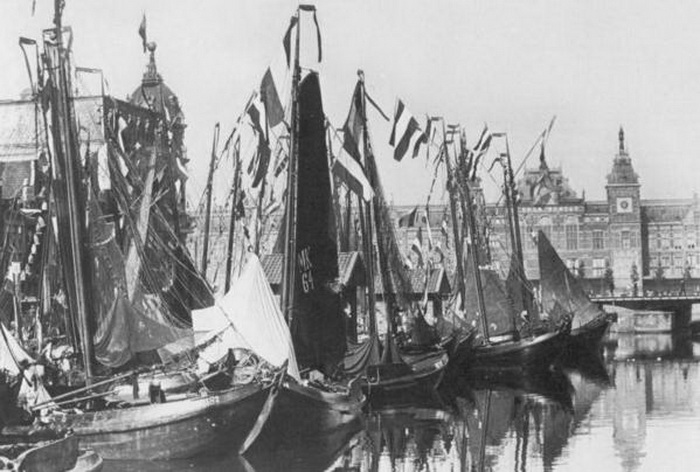 Damrak in long-gone times. Central Station, seen to the right, was built in the 1880’s

Note that the backs of the houses are actually standing in the water, which would have made it easy for ships to offload their good straight into — or out off — storage.

These houses have their front door in the Warmoesstraat. Warmoes is an old Dutch name that refers to a vegetable garden where produce is grown on a small-time commercial basis. 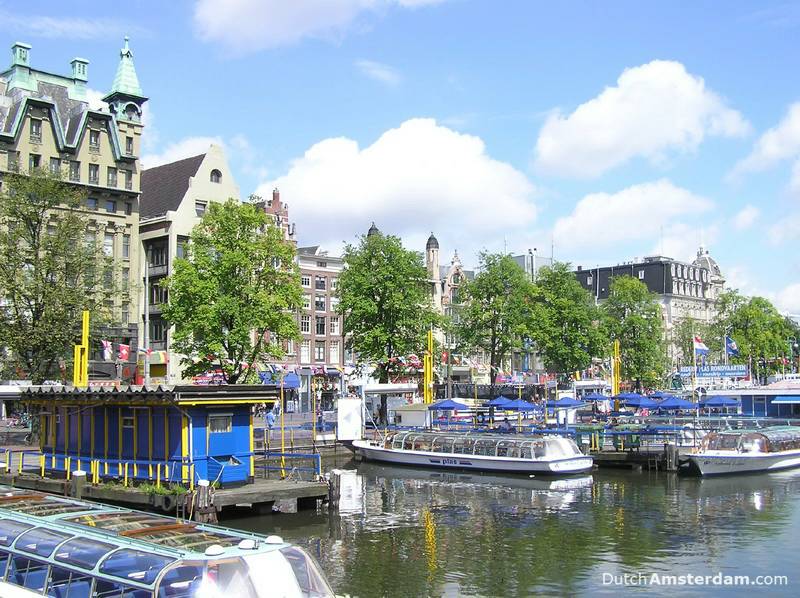 Central Station, on the right, is not visible

Nowadays the water is home to some of Amsterdam’s many canal tour boat operators.

Hotels at or near Damrak

While Damrak is very central — just outside of the train station where nearly all tourists arrive — you should not feel like you have to get a hotel on that specific street. A notable exception is the landmark Park Plaza Victoria Amsterdam (4 stars), commonly known as the Victoria Hotel. Located at the beginning of Damrak, right across from Central Station, this hotel is known for its superb service, spacious rooms, and comfortable beds.

But do consider other nearby hotels in the center of Amsterdam as well. Ask yourself whether you want to stay in a hotel along one of the main tourist drags, or in a classier (quieter?) location.

Keep in mind that Amsterdam, and particularly the city’s center, is small enough to comfortably walk to many of the most sought-after tourist attractions. Others can be just as easily reached with a short tram ride.