DutchAmsterdam.nl, Jan. 7, 2013 — British warehouse Marks & Spencer is returning to Amsterdam and will once again set up shop in the Kalverstraat, one of Amsterdam’s busiest shopping streets.

Update, October 15, 2017: This Marks & Spencer has closed. That’s it. Done and dusted. No more Marks & Sparks in the Netherlands. The M&S location in The Hague has closed down as well.

Yes, the store saw a steady supply of customers. Apparently just not enough of them to justify keeping it open.

Still have a craving for British food

Update, November 8, 2016: Yes, you heard it right: M&S is closing its store in the Kalverstraat — reportedly by September, 2017. No, we don’t expect the chain to open up another store anywhere in the Netherlands any time soon. Nothing to do with Brexit, by the way. What then? We don’t know.

All we can say now is ‘Goodbye, and thanks for all the clotted cream!”

Marks & Spencer (M&S) itself is mum on the move, but Distrifood — a Dutch trade publication for supermarkets — says the company is opening it’s Amsterdam location in early April. 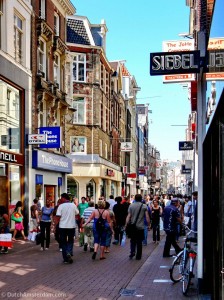 The Kalverstraat in Amsterdam is the most expensive street for retailers in the Netherlands.

Until 2001 the iconic retailer of ‘British Quality Goods’ had a store in the same shipping street, as well as in The Hague. But that year a sudden slump in sales in the UK led the company to close its stores on the Continent.

Currently M&S — whose boss, Mark Bolland, is a Dutch national — has stores in 41 countries.

Staffing agency Randstad is recruiting personnel for the company.

Its recruitment material refers to Marks & Spencer’s Amsterdam location as a ‘Flagship store, with a luxurious ambiance and high standard of service.’

Randstad says the store is a supermarket and an E-boutique for various clothing brands. Aside from a regular assortment of goods the supermarket will also stock luxurious and exclusive products.

In the E-Boutique fashion items will be sold in an innovative way using tablets.

Expats (the wife of Dutch Amsterdam‘s publisher included) already look forward not just to the clothes, but also to a steady supply of genuine clotted cream (hard to come by in the Netherlands), bangers, streak and kidney pie, and real cheddar cheese.

The narrow, busy Kalverstraat is the most expensive shopping street in the Netherlands. Retailers pay up to € 3.050/M² in rent per year.

Directions to Marks and Spencer, Amsterdam