The international jury of the 51st annual World Press Photo Contest selected a color image of the UK photographer Tim Hetherington as World Press Photo of the Year 2007. The picture was taken 16 September 2007 and shows a US soldier resting at “Restrepo” bunker, named after a soldier from his platoon who was recently killed by insurgents.

The 2nd Battalion Airborne of the 503rd US infantry is undergoing a deployment in the Korengal Valley in the Eastern province of Afghanistan. The valley is infamous as the site of downing of a US helicopter and has seen some of the most intense fighting in the country. Hetherington’s photograph is part of a picture story that was also awarded 2nd Prize in General News Stories. He had traveled to Afghanistan on assignment for Vanity Fair. 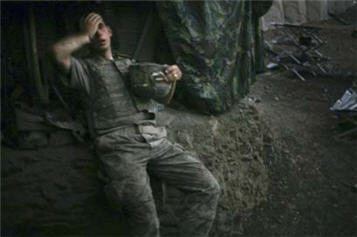 “This image shows the exhaustion of a man – and the exhaustion of a nation,” says jury chairman Gary Knight, and adds “We’re all connected to this. It’s a picture of a man at the end of a line.” Fellow juror MaryAnne Golon commented: “I use all my energy to have people notice bad things. There’s a human quality to this picture. It says that conflict is the basis of this man’s life.”

This year, a record number of participants from 125 countries sent in their work, a total of 5,019 photographers, which is an increase of 12.5% compared to 2007. The total number of images submitted is 80,536. Of all participants 80% chose to enter the contest by uploading their work online.

Tim Hetherington, the author of the World Press Photo of the Year 2007, will receive his award during an awards ceremony in Amsterdam on Sunday 27 April 2008. The award also carries a cash prize of 10,000 euro. In addition, Canon will donate Hetherington a Canon EOS-1Ds Mark III camera.

The awards ceremony is preceded by a three-day program of lectures, discussions and screenings of photography. The exhibition of prizewinners will be shown at the Oude Kerk from 29 April to 22 June and will subsequently visit over 100 locations around the world. For a provisional exhibition schedule see: www.worldpressphoto.org/exhibitions.

The annual World Press Photo exhibition, in which a selection of winning photos is shown, will take place from April 29 through May 22 in the Oude Kerk (Old Church) in Amsterdam. The exhibition will then travel throughout the world.