Home > Things To Do > Parks > Vondelpark > Vondelpark: the rules (You won’t believe why dog owners are upset)

With 10 million visitors a year, Amsterdam’s Vondelpark is the most popular park in the Netherlands.

Named after Dutch poet Joost van den Vondel, Vondelpark opened to the public in 1865. In 1996 it was declared a Rijksmomument (National Monument).

Motorized traffic is not allowed in the park, leaving the broad bicycle paths free for bicyclists, skaters, and skateboarders. [Tip: this popular 3-Hour Guided Bike Tour of Historical Amsterdam takes a relaxing break in Vonderpark].

You’ll see people riding horses as well, since the Hollandsche Manage — the oldest riding school in the Netherlands — is a stone’s throw from the park.

During the seventies the Vondelpark was a prime hangout for hippies. Many of them camped out overnight, a practice that was soon made illegal.

On sunny days the park often still exudes a bustling but relaxed atmosphere. 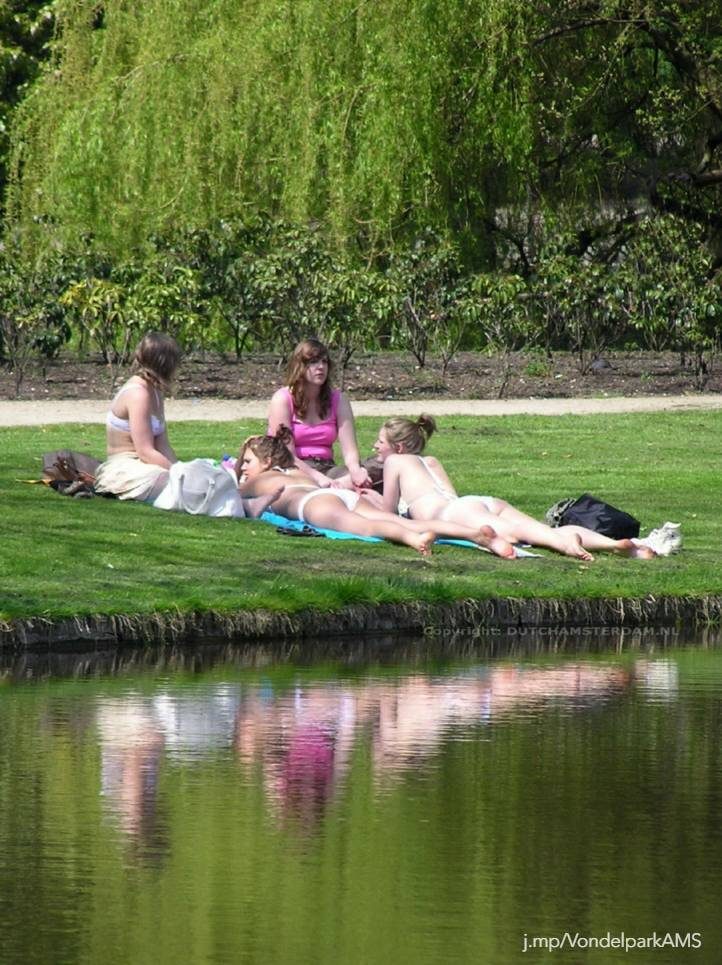 The natural beauty of Amsterdam’s Vondelpark

Yet despite Amsterdam’s ‘Anything-Goes’ reputation, use of the park is subject to a strict set of rules — with one controversial exception.

Hence the need for clear rules. 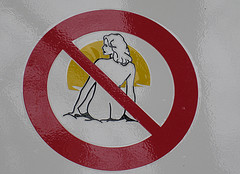 The prohibition against nude sunbathing within the Vondelpark is somewhat odd as doing so is allowed in many parks in other European cities. Indeed, it is tolerated in many parks and nature areas throughout Amsterdam and the rest of Holland as well.

Topless sunbathing is OK at Vondelpark, but you are more likely to see young women strip down to bra and/or panties to catch some rays during their lunch break.

The controversial exception to the rules? Read this news item:

Dog owners in Amsterdam are angry after the city legalized public sex in one of the city’s most famous parks.

Councillors agreed that heterosexual and gay couples could have sex in the Vondelpark which has ten million visitors a year.

But they promised to clamp down on dog owners who let their pets walk in the park without a lead.

One dog owner protested: “As long as the park has existed, we’ve been allowed to let our dogs run freely. It’s outrageous that we will be punished from now on but public sex won’t.”

A spokesman for the council which runs the southern part of Amsterdam said: “When the dogs are not kept on a leash they pee on whatever they see and they cause a lot of nuisance for other visitors.”

Alderman Paul Van Grieken defended the decision to allow public sex in the park from September.

“Why should we impose a rule on something you can’t impose a rule on. Moreover it isn’t a nuisance for the other visitors and gives a lot of pleasure to a certain group of people,” he said.

“There still are rules,” he added. “They must take their garbage with them afterwards and never have intercourse near the playground. The sex must be limited to the evening hours and night.”
– Source: Orange, Mar. 10, 2008 [No longer online]

A typical case of ‘Gedogen’

At the time the Vondelpark fell under the authority of Stadsdeel Oud-Zuid (borough Old-South). Few people in Amsterdam tried to understand the odd behavior of those who ruled over the city’s boroughs. Doing so would have been an exercise in futility.

That said, Van Grieken remarks regarding the imposition of rules on something you cannot really regulate is best explained by a policy the Dutch call gedogen.

Meanwhile, a spokesperson for the Amsterdam police department declared that police will indeed take action against those who ‘cruise’ in a manner likely to cause offense.

This means: make sure your encounter cannot be observed by others. Otherwise you are causing offense, in which case the police will get involved. (No, not that way).

Video: History of the Vondelpark

Video: History of the Vondelpark
Hello! Our original content is protected by © Copyright DutchAmsterdam .nl
Do not republish or repost.

Category: Blog, Parks, VondelparkRelated to: VondelparkThis article is updated regularly. Last major update: March 14, 2008
Last minor update: Sunday, December 30, 2018 at 12:28 PM, Central European Time (CET)
Transparency:
The DutchAmsterdam website includes affiliate links. That means we get a small commission — at no additional cost to you — for each purchase you make. Your support helps us provide this site free of charge. Naturally, as our Editorial Policy states, our content is never influenced by our advertisers or affiliates.