Around 1380, a dyke was built at the outskirts of Amsterdam in order to defend the growing city against what was then the sea.

This dyke is today’s Zeedijk, a lively street on the outskirts of the Red Light District. Once the domain of junkies, the street is now home to fashion shops, bars, and Chinese restaurants.

As the Amsterdam’s trade and harbor grew, a defense wall was built in 1481.

Today the Schreierstoren and De Waag are the only structures left from that wall. 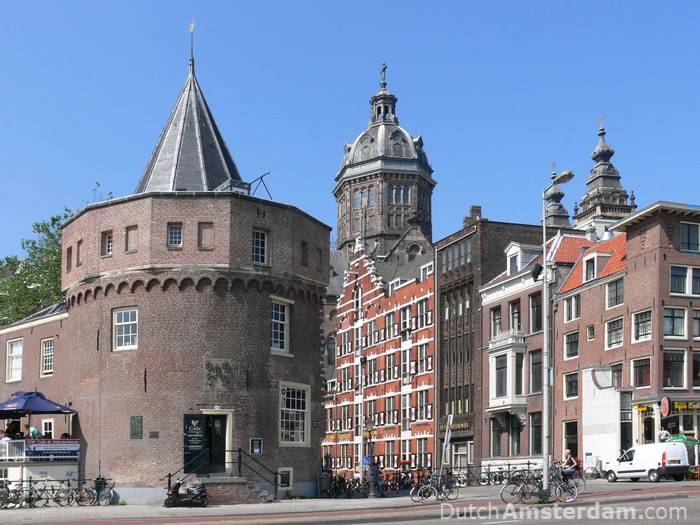 The Schreierstoren overlooked both the sea and the harbor — and has as a result become the subject of a myth:

Travel books in many languages, tour guides, and even many Amsterdam natives incorrectly translate the name as Weeper’s Tower.

They explain that the tower got this name because it was the place where the wives of sailors either said their goodbyes or anxiously waited for their safe return.

As proof they point out a gable stone with a crying woman, the term Schrayer Hovc in Old Dutch, and a ship. Underneath a cartouche carries the date 1569.

However, the story isn’t true.

The sculpted gable stone depicts a virgin — as the municipality of Amsterdam was often represented — who is sad due to the difficult position the city finds itself in just prior to the 80-year war.

At the time the Spanish ruled the Netherlands, and Alva had issued a new sales tax against which the Dutch revolted.

There were other problems as well.

The City of Amsterdam long remained loyal to Spain, which helped keep the trade routes open and protected. But the Watergeuzen, part of a group of malcontents who opposed the Spanish rule, had blocked the harbor of Amsterdam by scuttling ten to twelve ships.

No wonder the virgin was crying.

The name of the tower started out as Schrayhouck, which means ‘sharp angle’ — a reference to the sharp angle at which the tower is positioned with regard to the canal of Oudezijds Kolk and the Geldersekade.

The tower carries a stone commemorating Henry Hudson who, in 1609, departed here with his ship De Halve Maen (Half Moon) and then discovered ‘New Amsterdam’ (New York).