If you have ever watched the Dutch national soccer team play football anywhere in the world — or if you’ve been in Amsterdam during Holland‘s annual King’s Day celebration (formerly Queen’s Day) — you may wonder why nearly all Dutch people dress in orange during such occasions.

Table of Contents hide
1 Dutch Royal Family: The House of Orange
2 The Only Day On Which Not To Wear Orange
3 Soccer (Football) and Orange
4 The Qatar Problem
5 Max Verstappen and his Orange Army
6 Turkey and Oranges
7 Want to Wear Orange Yourself?

After all, the colors of the official Dutch flag are red, white, and blue. 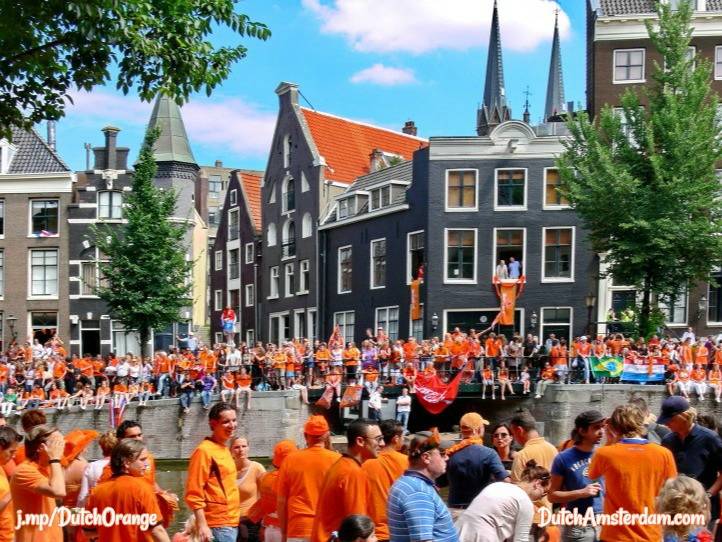 The answer is simple: Orange is the color of the Dutch Royal Family, which hails from the House of Orange.

The House of Orange-Nassau (in Dutch: Huis van Oranje-Nassau), a branch of the German House of Nassau, has played a central role in the political life of the Netherlands — and at times in Europe — since William I of Orange (also known as “William the Silent” and “Father of the Fatherland”) organized the Dutch revolt against Spanish rule, which after the Eighty Years’ War led to an independent Dutch state.
– Source: Wikipedia, last accessed June 10, 2008

Wikipedia also notes that “Prince of Orange is a title of nobility, originally associated with the Principality of Orange, in what is now southern France.

The Dutch find these kind of events enormously gezellig

There’s a whole bunch of dry to very dry history behind all of it.

Suffice it to say that to this day members of the House of Orange are extremely popular in the Netherlands. The color orange has come to symbolize the country, and to signify national pride. 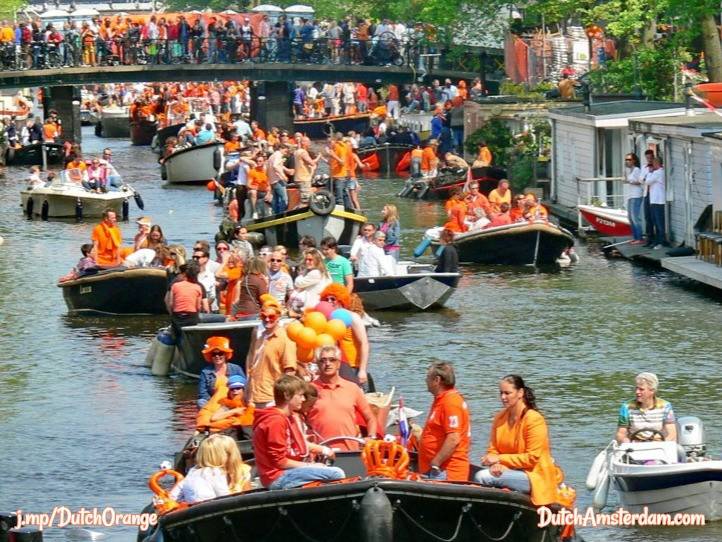 On royal birthdays, the Dutch tricolor is flown with an orange pennant above it. Each year on April 27, Amsterdam — and indeed the entire county — turns orange. Revelers can be heard to sing, “Oranje boven, oranje boven. leve the Koning!” (Orange on top, Orange on top. Long Live the King!) 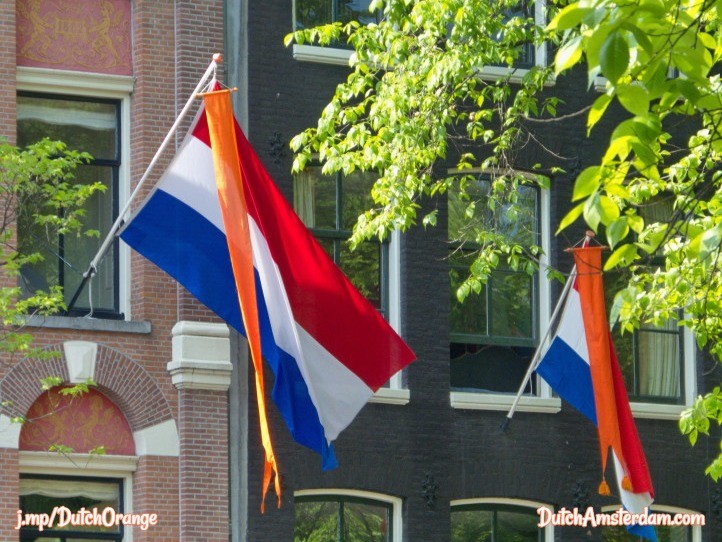 The Only Day On Which Not To Wear Orange

Speaking of King’s Day: As you know, this national celebration — which takes place on April 27 — was formerly known as Queen’s Day. Queen’s Day was celebrated on the 30th of April.

And wouldn’t you know it, for years after the switch was made, quite a few enthusiastic tourists flew to Amsterdam on April 30th — wearing as many orange clothes as they could find. Oh, the perils of using outdated travel guides!

Hence, a word to the wise. Do not wear anything orange on April 30th.

Oranje, Dutch for orange, is the nickname of the Dutch national soccer team.

Wherever they play, the national team is followed around by the army of sports fans known as the ‘Orange Legion’ (Dutch: Oranje Legioen). They turn stadiums, streets, and bars orange everywhere they go.

Supporters have been known to turn local campings into ‘Camp Orange.’ When possible, the supporters march en-masse from a central location to the stadium where their team plays.

Win or lose, Netherlands soccer fans (that’s football fans to Americans) are famous for supporting the Orange team in a positive way.

A couple of years ago the stellar performance of the Netherlands women’s national football team (Dutch: Nederlands vrouwenvoetbalelftal) in the 2019 FIFA Women’s World Cup tournament did not go unnoticed.

Incidentally, the team’s nickname — ‘Orange Lionesses’ (Dutch: Oranje Leeuwinnen) — stems from the fact that the logo of the Royal Dutch Football Association (KNVB) sports a lion is its logo. The lion is the Netherlands’ national and royal animal. [See also: Amsterdam’s Coat of Arms]

But now… the FIFA World Cup Qatar 2022™ is highly controversial. Thousands of workers have died building the football stadiums in Qatar due to appalling working conditions.  Qatar has a dismal human rights record in the first place. Period.

Consequently, many Dutch soccer fans are conflicted, to say the least. While they would love to cheer on the Dutch soccer team, they also feel that cheering in this case is out of place.

Therefore, where streets and squares in the Netherlands are normally exuberantly decorated (yes, primarily orange) weeks before an upcoming tournament, that is not the case this year. Fair enough, this time of the year it may be a bit too cold for street- and garden parties. But we’ll find more reason to cheer if and when Qatar decides to leave the Dark Ages behind.

Meanwhile Amsterdam daily Het Parool writes that there is not much orange to be seen in Qatar either. “[N]ever in the last decades have so few Dutch fans been present at a major final tournament. Formally there are about three thousand, but a significant part of them are expats.”

Max Verstappen and his Orange Army

And then of course, there is Belgian-Dutch racing driver Max Verstappen (2021 and 2022 Formula One World Champion) and his Orange Army. 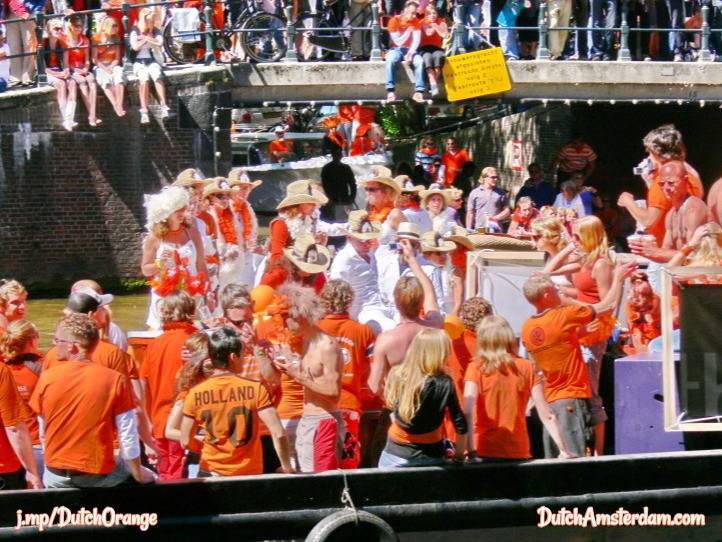 On King’s Day wear something orange, find a boat, and sail the canals of Amsterdam

In March 2017 the Dutch government refused to be blackmailed into allowing government officials from Turkey to wage a political campaign in the Netherlands.

In response, a tiny fraction of Turks in the Netherlands rioted — while some folks in Turkey took to slicing, dicing, and juicing oranges while uttering threats and other unkind language toward the Dutch.

Meanwhile, let’s just note that Amsterdam is home to people from 180 different nationalities, the vast majority of whom happily wear orange with the rest of us.

Want to Wear Orange Yourself?

Shop for ‘Holland Orange’ T-shirts, caps, socks, and whatnot at Amazon.com.

By the way, nowadays the Dutch Government really wants you to use “Netherlands” instead of “Holland.”

Bonus fact: During WWII, Dutch housewives often made sure that laundry was hung out to dry in a particular pattern: something orange, something red, something white, and something blue…

Coming to Amsterdam? Here’s what NOT to do