DutchAmsterdam.com — On June 3, 2007, American photographer Spencer Tunick realized on of his large-scale ‘human installatations’ in Amsterdam.

Tunick’s art projects consist of photo shoots in which all participants are naked. All of these installations are held in public locations.

Some information and articles on this subject have been archived

Since 1994 he has photographed over 75 such projects in cities around the world, including New York, London, Barcelona, and Vienna. He set a record for naked photography with a photo of 18,000 people in the buff in Mexico City last year.

In the Amsterdam shoot 2,000 men and women posed for a series of group photos. 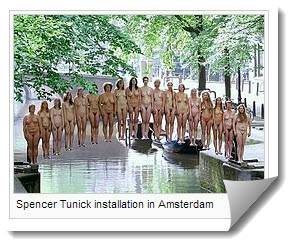 Settings included a large and rather stark parking garage, but a bike ride by hundreds of naked woman across a nearby bridge drew more attention.

Another shoot featured nearly two dozen women standing on a custom-built iron bridge across the Lauriergracht.

The bridge was designed to become invisible once people were standing on it, creating the illusion of a bridge consisting solely of human bodies.

“It was very exciting and I didn’t even feel shy,” one woman said. Other participants expressed similar sentiments.

Tunick is not surprised. “My work has nothing to do with sex or eroticism,” he told a local newspaper. “I create dreams and memories no one will forget. Of course it has something provocative, but that is mostly in the fact that all these people are in adam-costume at an unnatural location, in the middle of the city, a bulbfield, or a museum.”

“I rather use the naked body mostly as an abstract form. The nudity in part symbolizes freedom. But it is more than that. It also references ancient magical rituals as they existed in classic mystery games.”

“I get people to shed their inhibitions basically because the people shedding their clothing are interested in contemporary art,” Tunick told the Associated Press.

Incidentally, the location for the installation was closely guarded — standard procedure for the shoots so that the photo crew does not have to deal with hordes of uninvited onlookers.

Partipants were first met at 3:30 am –and where only then told at which locations the sessions would take place.

“It was very hard to find space in a city meant for such a small amount of people,” Tunick told De Telegraaf. “I was very lucky to get almost 2,000 to fill a massive car park.”

Life-size pictures of the shoot were later displayed on billboards at various locations throughout Amsterdam.

Tunick calls his models ‘city adventurers.’ “People from all walks of life participate in my temporary installations — as I call these actions, because they are not performances. I am not looking for an audience, but rather need participants. People willing to use their stark-naked bodies to form a super-sculpture.” 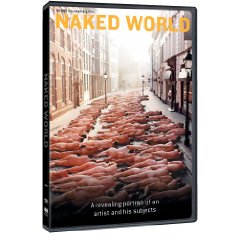 “It is certainly not only nudists who come and help me,” the artists says. “There are always lots of art students who participate, but also housewives, teachers, electricians….”

The photographer says there is a small group of fans who follow him around the world. “They apply for almost every project. I think that’s great, but I do not want famous faces in my pictures, so I kindly ask them to stand in the back. The same thing applies to people with tattoos that are too prominent, or ones whose bikini tan lines are too clear.”

Tunick himself stays fully dressed. Not that he is a prude, but experience has taught him that his camera kit bruises and cuts his body. “You’ll agree that a nude photographer wearing only a vest for his lenses and roles of film looks dorky,” he says.

Tunick, who last April already shot some pictures in the bulbfields near Amsterdam, is please that so many people applied for his Amsterdam installation.

A few years back he barely managed to attract 400 people for a shoot in the Dutch city of Breda. But that was before he gained notoriety and become popular. He has been doing mass nude photo shoots since 1994. His breakthrough came when famous British collector Charles Saatchi commissioned him for a creation. Since then countless museums for modern art have sought him out. 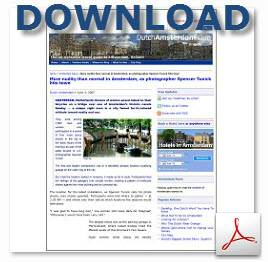 We have decided to retire those articles in favor of this roundup.

If you still wish to view the old articles you can download them as a PDF file.

Category: NewsRelated to: art, Spencer TunickLast updated: Friday, November 22, 2013 at 3:39 PM, Central European Time (CET)
Transparency:
The DutchAmsterdam website includes affiliate links. That means we get a small commission — at no additional cost to you — for each purchase you make. Your support helps us provide this site free of charge. Naturally, as our Editorial Policy states, our content is never influenced by our advertisers or affiliates.