Home > Things to Do > Swimming in Amsterdam

Where to Swim in Amsterdam

There are plenty of places where you can swim in Amsterdam.

Perfect weather for picnics in the park and a refreshing dive or swim.

Map of Swimming locations in Amsterdam

Amsterdam is often called the “Venice of the North.” No wonder. No less than 24% of the city consists of water: two rivers, 165 canals, and several lakes.

The largest bodies of water are the river IJ, the natural lake Nieuwe Meer, and the man-made lakes Sloterplas and Gaasperplas.

Best known, of course, are the canals.

But you cannot — or at least should not — just swim anywhere you want.

Our map shows the location of pools (blue icons) and of nature swimming spots (green icons) — both official and unofficial. 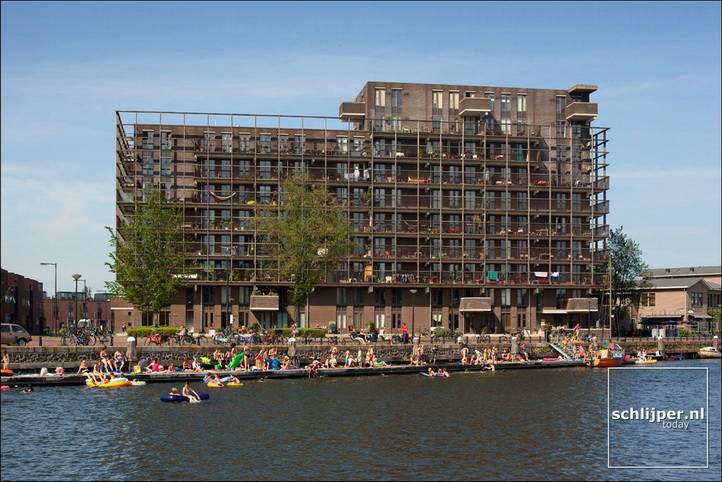 Each of the twelve provinces of the Netherlands publishes an annual list of officially-approved swimming spots.

Between May 1 and October 1 the quality of the water at these swimming holes is checked weekly by local water boards and by Rijkswaterstaat, the Ministry of Infrastructure and the Environment.

Hygiene and safety along the waterside is taken into account as well.

Official spots tend to be well-maintained. Some have facilities such as public toilets or snack bars.

Signs inform visitors of rules, possible hazards, and the quality level of the water — which normally ranges between good and excellent.

If health risks arise, such as the presence of blue-green algae, signs will go up as well.

Swimming in open surface water, whether in approved or unapproved locations, is always at your own risk.

If you get your feet caught up in a discarded bike, fall ill due to the presence of algae, or get injured in any other way (e.g. by glass on the beach), you’re on your own. (Hint: this is not America; you can’t sue to your heart’s content.) 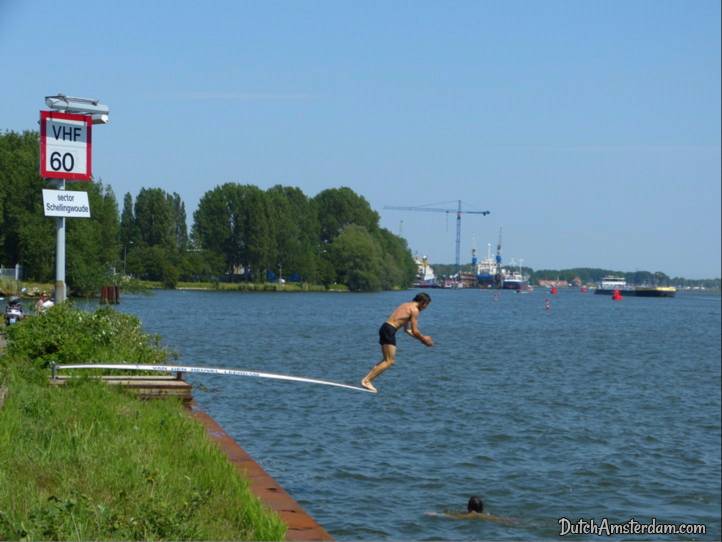 When swimming at nature spots, try not to ingest any water in order to prevent stomach- and intestinal problems, or worse.

If there is boat traffic, stay away from it.

The water may be very deep even while it is relatively shallow near the wall, and the temperature of the water may sharply differ in places. Be wary of under-cooling and cramp.

It may be a good idea to wear water shoes.

Shower as soon as possible after swimming.

In short: use your common sense.

Swimming in the Canals

Swim in the canals during the annual Amsterdam City Swim

On warm days lots of tourists and locals alike think it’s a good idea to swim in the canals of Amsterdam.

It is not (albeit with a few exceptions: see the map).

The ambition of Waternet, Amsterdam’s water authority, is to someday have the water in the canals clean enough for people to swim in.

That said, while officially the canals are not designated as swimming water, there is now a yearly Amsterdam City Swim event — organized as a fundraiser for research into underexposed diseases such as Lou Gehrig’s Disease (ALS).2

The quality of the water has indeed improved quite a bit in recent years — due in part to a project to connect all of the city’s 3000+ houseboats to the sewer lines.

That project was completed in 2018. However, that doesn’t mean the canals are free of effluent and other wastewater. Sewage lines can and do break, and sometimes they overflow when there’s a sudden deluge of rain. 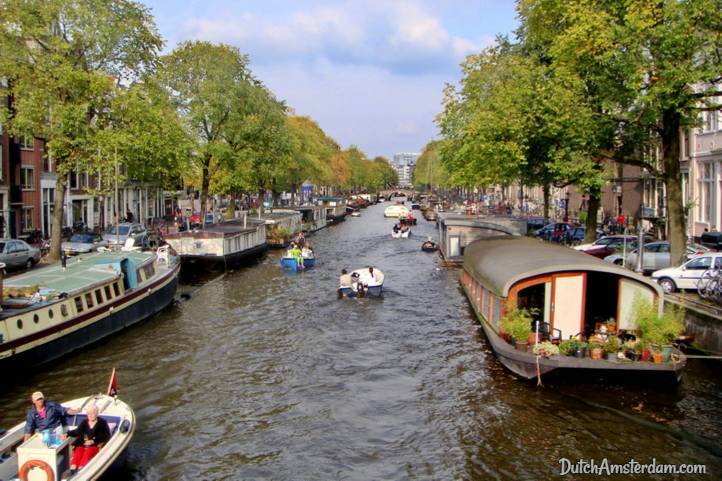 Some canals, such as the Prinsengracht, are simply too busy for people to safely swim in.

If that isn’t enough to dissuade you from diving into a canal, consider this: Every year the city fishes between 12,000 and 15,000 bicycles from the canals.

It’s easy to get your feet tangled in discarded bikes, shopping carts, and whatnot.

Many also have lots of boat traffic, making swimming there unsafe.

It’s not that people don’t swim in the canals at all. Throughout the city there are small jetties from which you can easily enter and exit the water — and lots of people do.

No one seems prepared to say whether or not it is illegal to do so (possibly since nobody wants to be held liable if something bad happens). 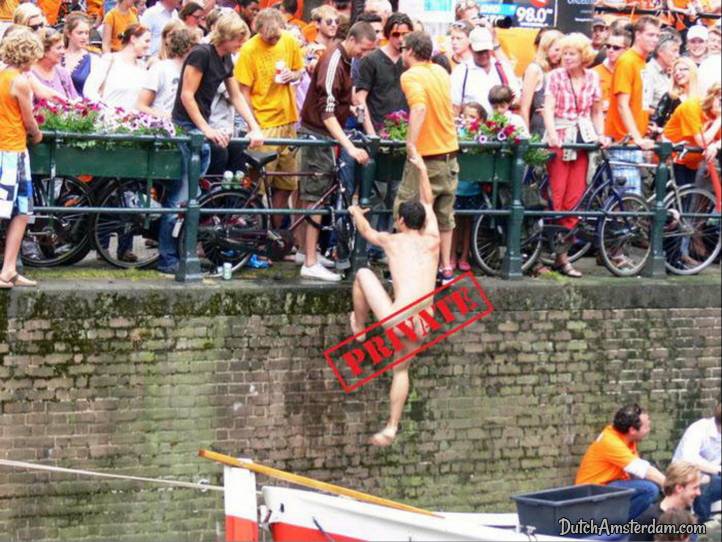 In July 2010 soccer fans lined the canals to celebrate the Dutch National Football team after it finished in second place in the World Cup soccer tournament. This man took an impromptu swim — with police officers looking on (and laughing)

Waternet simply says “You cannot swim in the canals.” But in reality there are certain spots (e.g. Borneokade and Bogortuin) where a more-or-less official blind eye is turned.3

It’s certainly illegal to jump off bridges. Then again… this is Amsterdam:

Street photographer Thomas Schlijper captured these kids enjoying the water at the junction of Prinsengracht and Reguliersgracht.

There is an increasing demand for new, ‘unofficial’ swimming spots in the city. The City Council intends to soon designate several such open water locations.

Doing so is possible in large part because the quality of the water in the canals has never been as good as it is now.

Swimming in rivers and channels is forbidden and life-threatening. So says Rijkswaterstaat, part of the Dutch Ministry of Infrastructure and the Environment responsible for Holland’s waterways.4 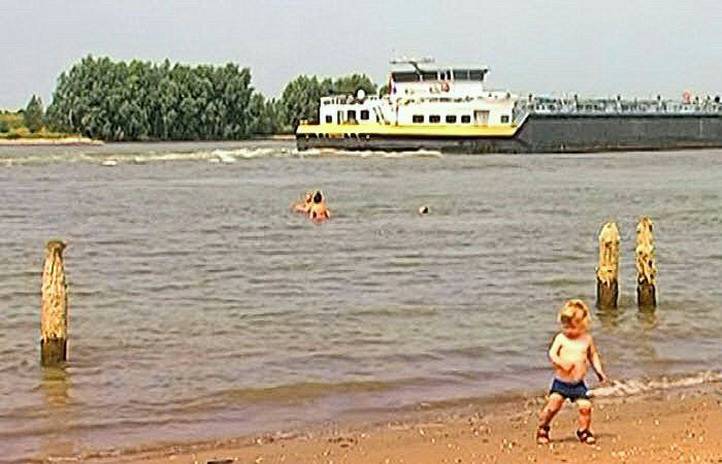 In most rivers swimming is prohibited because it is dangerous

Rijkswaterstaat, whose officers patrol the waters in yellow boats sporting the letters RWS, is authorized to issue fines of €140 per person.

It is forbidden to swim

It is also illegal to jump or dive off bridges and sluices. Jumpers can easily get injured, for instance by waterlogged pieces of wood that float just below the surface.

Some bridges, particularly in waterways close to the river IJ, carry dutch-language signs stating that swimming in the area is forbidden.

You’ll see such signs near sluices as well. The signage makes reference to “BPR” which stands for Binnenvaartpolitiereglement — Inland Waterways Police Regulations.

Yes, you can drink the water from the canals