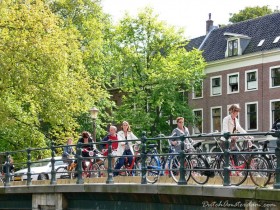 Top attraction: a bike tour along the canals

The report — which emphasizes cities, rather than popular holiday resorts — excludes day trippers and local visitors.

Same-day visitors, people in transit and cruise passengers are also not counted. 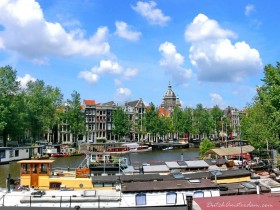 Houseboats, as well as 17th and 18th century houses line Waalseilandgracht in the center of town

Note: some news outlets do not view Istanbul as a European city, and therefore interpret the index lists Amsterdam in seventh place.

Euromonitor notes that while European cities remain classic, must-see destinations the world over, less than one third of the Top 100 cities it monitors are now in Europe.

Many older cities, such as Venice, Barcelona, Berlin, and Amsterdam, are suffering from excessive tourism, with overcrowding at the top sites and attractions. Some are promoting tourism outside mainstream areas, either inside or outside the boundaries of the core city, in an attempt to distribute visitors and their wealth more evenly.

Indeed, in Amsterdam the discussion about overcrowding due to growing numbers of tourists has been swelling for a number of years.

The city’s marketing and tourism professionals have long been encouraging tourists to visit more than just Amsterdam’s city center — and rightly so.

Many tourists — particularly first-time visitors — naturally focus on the medieval city center with its iconic ‘belt of canals.’

But increasingly tourists are also discovering Amsterdam’s other districts.

Many return-visitors make it a point to see the many attractions in Greater Amsterdam — from the North Sea beach in the West to the unique landscape in the North, and from the bulb fields in the South to the new land (and old castles) in the East. [Check out these day trips and excursions] 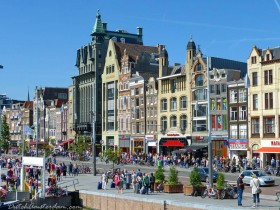 When commuters, day trippers and Dutch locals are included, the city welcomed 17,3 million visitors that same year (18,3 million in 2015).

A recent evaluation of the city’s tourism policy shows that the number of tourists will grow by 5 percent each year, culminating in 23 million visitors in 2025.3

This article was written by Amsterdam native Anton Hein