© DutchAmsterdam.nl — The City of Amsterdam has announced it will close 43 of its 228 coffeeshops because they are located too close to schools.

In doing so, Amsterdam mayor Job Cohen “reluctantly” follows up a federal government directive to establish ‘distance criteria‘ between schools and coffeeshops.

“I would not have come up with something like this,” Cohen comments.

The shops affected are all located within 250 meters walking distance of high schools.

Among the establishments to be closed is the internationally-renowned coffeeshop The Bulldog at Leidseplein — which opened its doors in 1985 in a building that formerly housed Amsterdam’s police headquarters. The world famous coffeeshop is too close to the Barlaeus Gymnasium. 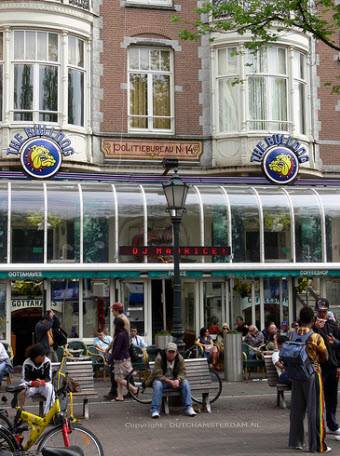 Coffeeshop The Bulldog, located in Amsterdam’s former police headquarters at Leidseplein
© Copyright DutchAmsterdam.nl. Want to use this photo?

The shops must close their businesses no later than December 2011, according to Het Amsterdamse coffeeshopbeleid 2008 (Amsterdam Coffeeshop Policy Statement 2008), which is to be presented later today.

The owners are not allowed to move their coffeeshops to another location within the city. Mayor Job Cohen says he would like to spread the shops throughout the city, but almost all of the city’s boroughs are actively opposed.

The government directive is the brainchild of the Christian Democrats (CDA) — the most powerful party in the Dutch coalition government. Headed by Prime Minister Jan Peter Balkenende, the party constantly pushes toward more stringent control of coffeeshops. Under the current Balkenende cabinet, it does so in tandem with the Christian Union (in Dutch: ChristenUnie, CU), a relatively young Dutch orthodox Protestant political party.

CDA and CU pushed the most stringent interpretation, in which coffeeshops would not be allowed to operate within 500 meters walking distance of primary or high schools.

The less stringent norm of 250 meters was already employed by a majority of the 105 Dutch municipalities with at least 1 coffeeshop within their borders.

The City of Amsterdam is not adopting distance guidelines regarding primary schools, since that would mean more than 90% of its coffeeshops would have to close. According to Job Cohen, doing so would be undesirable as it would play havoc with the successful policy of separating soft drugs from that of hard drugs.

Cohen will today address a national conference of mayors who are meeting to discuss a possible joint policy toward coffeeshops within their communities.

Cohen will plea for further regulation of the production and sale of marijuana. “The system we have now is reasonably successful, and better than it is abroad. Only the backdoor is still a problem,” Cohen says, referring to the fact that while coffeeshops are legally allowed to sell soft drugs, they are technically not allowed to purchase their supplies.

“I plea for a closed circuit from supply to sale. That way you can exercise better control over quality, and also tax profits. I also think it is better to use our scarce police capacity for other issues,” says Cohen.

The Netherlands should not fear negative reactions from abroad, the Amsterdam mayor says. Instead we should clearly explain our policies, and show that we have “ironclad arguments” in their favor.

He points out that the use of soft drugs in the Netherlands is lower than that in countries where the use of hash and marijuana are forbidden by law. Holland also counts fewer drug addicts. According to Cohen that is due to Holland’s clear delineation between soft drugs and hard drugs.

Cannabis Capital of the World

With 288 coffeeshops, Amsterdam is home to a quart of all coffeeshops in the Netherlands — and is, according to Dutch daily De Telegraaf, the “Cannabis Capital of the World.”

Nevertheless, according to the Coffeeshops Policy Statement 2008, the City of Amsterdam encounters hardly any problems with its coffeeshops. Cohen compares the situation with alcohol. “The misery that causes, including addiction problems, are much greater with alcohol than with soft drugs. Yet I hear nobody suggest a ban on alcohol. After all, that has been tried once in the US, leading to enormous problems with crime.”

The City of Amsterdam does plan to ‘eventually’ reduce the number of coffeeshops currently located within the Red Light District — where there is too high a concentration of the establishments.

It is not yet known what approach the City, which is carrying out a ten-year plan to clean up the world famous neighborhood — will take towards these coffeeshops.