Home > About Amsterdam > Squatting in Amsterdam 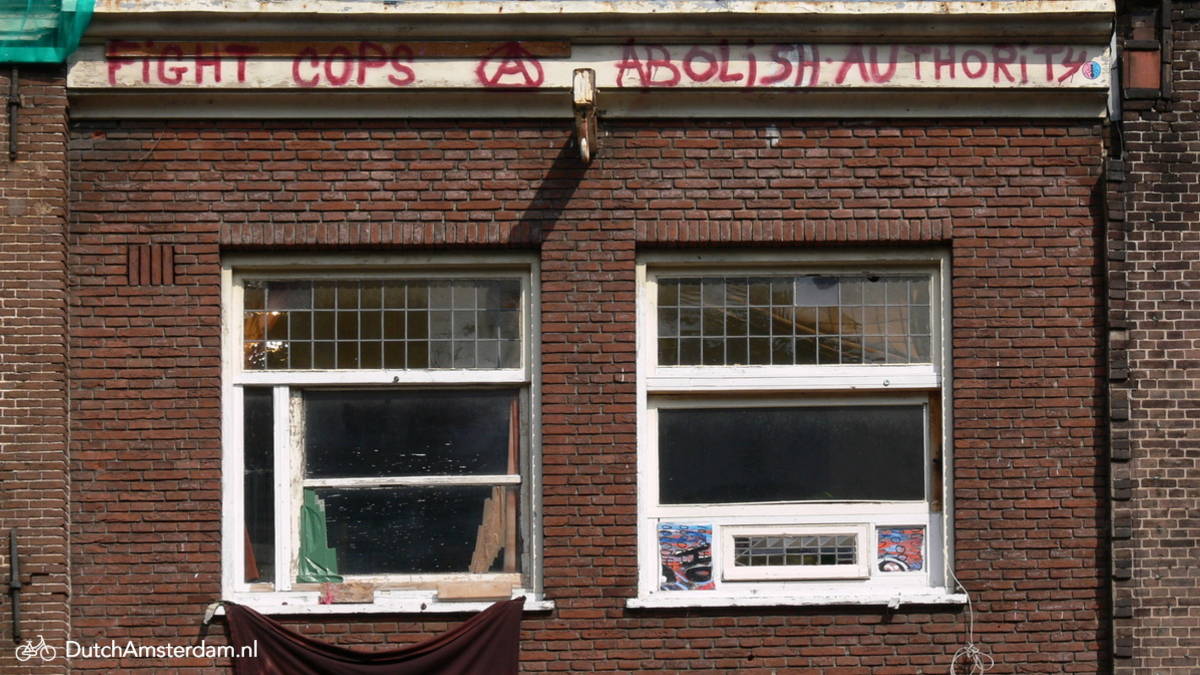 A squatted house in Amsterdam. Photo taken in 2010. The building has long since been cleared and razed.

Squatting started in the sixties, but with tens of thousands of people looking for a place to live the practice became popular in Amsterdam and other big cities during the seventies and early eighties.

Groups of squatters started occupying houses and office building that had been empty for over a year.

Most of these buildings belonged to so-called ‘house milkers’ — landlords who deliberately kept the buildings empty and refused to carry out necessary upkeep, speculating that the lots the houses stood on would bring more money than they could get if they rented or sold the homes.

Houses, including monuments — or monumental buildings — were often neglected in the hope that they would become so unstable that owners could more easily obtain demolition permits.

The Netherlands is among a handful of countries where — under certain circumstances — squatting is not forbidden by law. If a building has not been used for a period of twelve months, and the owner can not demonstrate that he plans to ‘soon’ start using the building again, squatting is tolerated. [Update, Oct. 1, 2010: Squatting Banned in the Netherlands]

In light of this law, squatters are seen as people who occupy the building ‘without right or title.’ The rightful owner can start a civil procedure to have the squatters removed, but in order to do so he will have to prove that he plans to make use of the building within a reasonable amount of time.

Technically, breaking into a building — even one that is not in use — remains illegal, and police will arrest anyone caught in the act of doing so. Therefore well-organized squatters come prepared to immediately repair any sign of breaking and entering — and to lay claim to the building by putting at least one chair, one table, and one bed inside, which establishes the fact that the place is now in use as a private dwelling.

From popular to marginalized

Throughout Amsterdam squatters have managed to save many historic buildings — and, some claim, even the entire Jordaan district — from demolition crews.

The movement won much sympathy, not in the least from the estimated 54.000 people looking for a place to live.

In some cases the squatters contacted the owner of a squatted building, offering a deal: we’ll pay this much in rent if you leave us alone. In other cases squatters refused to leave buildings even after ordered to do so by a court of law.

Some buildings were more-or-less renovated by the squatters, for instance turning offices into apartments.

But the movement became increasingly anarchistic and more often than not riots ensued if and when police was ordered to clear a building.

De “Grote Keyser,” a huge complex at Keizersgracht became the center of a prestige battle between increasingly militant squatters and the police. The building was turned into a fortress. An illegal radio station, along with a buddy-phone system, was used to bring huge numbers of supporters to the building if it even looked like police were planning to remove the squatters.

At the start of 1980, due to the threat of large-scale rioting and violence then mayor Wim Polak refused to order the building cleared.

On February 29, 1980 police cleared a squatted building at the corner of Vondelstraat and Eerste Constantijn Huygensstraat. The building was immediately reoccupied and barricades were erected. In the days to follow the immediate area turned into a battle zone — with heavy street fights between riot police on one side and squatters and sympathizers on the other side. Eventually, on March 3 that year, the building was cleared after a military tank demolished the barricades in the streets surrounding the building.

No House, No Coronation. The poster shows Queen Beatrix with in the background houses in the Nieuwmarkt area torn down for the construction of the metro.

On April 30, 1980 the coronation of Queen Beatrix took place at the Royal Palace on Dam Square. In the months leading up to the festivities squatters and sympathizers promised, “Geen Woning, Geen Kroning,” — No House, No Coronation. The coronation day was marred by riots and fights between riot police and squatters throughout downtown Amsterdam.

While many people supported the squatters — or least their cause — the movement had lost its innocence. The Dutch tend to be enthusiastic fans of Holland’s Royalty, and by turning the coronation — in which the much-loved Queen Juliana abdicated in favor of daughter Beatrix — into a day of rioting (referred to by media as the ‘City War’) the movement had lost much sympathy.

Adding to the problem was the fact that Holland’s lax squatting policy attracted growing groups of anarchists from outside the country.

While large-scale riots in support of the squatters are a thing of the past, police in recent years have found buildings booby-trapped in a sign that the fight has taken a turn for the worse.

Recently several right-wing politicians have called for squatters’ rights to be curbed.

These agencies rent the properties to, for the most part, students. A Dutch passport is a requirement, as is the ability to speak, read and write Dutch.

• Rent a (student) room in Amsterdam

This article was last updated January 19, 2009. It may be updated at some point. If you’d like to get an alert, follow DutchAmsterdam here.

Category: About AmsterdamRelated to: anti-squatting, squatting