AMSTERDAM, Netherlands — If you can’t beat ’em … joint ’em? The City of Amsterdam has begun selling recently introduced “no toking” signs to prevent the official ones from being stolen as collector’s items, a spokesman said Friday.

The signs were created as part of an experimental ban on smoking marijuana on the street in “De Baarsjes,” one of the city’s poorer neighborhoods. The measure, which went into effect Feb. 1, 2006, was intended to reduce loitering and petty crime.

“On Wednesday we placed the first sign, and it was gone the next morning,” said Wim de Graaf. “We put up a new one Thursday, and it was taken the same night as well. That’s when the idea came to us to just sell them.”

The signs show two fingers holding a cone-shaped cigarette, with small white marijuana leaves on a black background – all enclosed within a red circle. 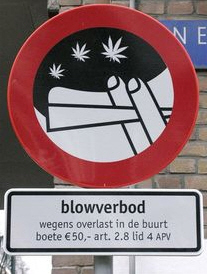 The city is selling them for 90 euros each (around US$110), and plans to donate the proceeds to charity. [1]

“We’re selling them at not much more than they cost, so we expect profits will be modest,” De Graaf said. But he added that the city has already had many requests for the signs, some from outside the city.

Marijuana is technically illegal in the Netherlands, but police don’t bother prosecuting possession of small amounts. It is openly sold in designated cafes known euphemistically as “coffee shops.” But people who smoke marijuana outside in De Baarsjes risk a euro50 (US$60) fine.

De Graaf said the signs can be ordered via De Baarsje’s Web site.

“Now everyone can have his own ‘no toking’ sign simply by ordering them through the city,” the site says in a tongue-in-cheek advertisement.
– Source: AP, Feb. 3, 2006

Footnote:
[1] Too few people actually went ahead and purchased the sign, so the city stopped selling it. However, you can still order the original sign — as licensed from creator Kochxbox Design