DutchAmsterdam.nl, February 19, 2009 — It is unclear whether constuction on the new North-South line of the Amsterdam metro will ever be completed. After yet another financial setback work on the project has virtually halted — and today Tjeerd Herrema, Alderman for Traffic, Transport and Infrastructure, resigned from his position.

“Given a five-year delay, and hundreds of millions more in a time of economic crisis, the limit of my political responsibilities has been reached,” Herrema explained.

The City has announced the formation of an independent committee that will research whether or not it would be responsible to continue work on the project. 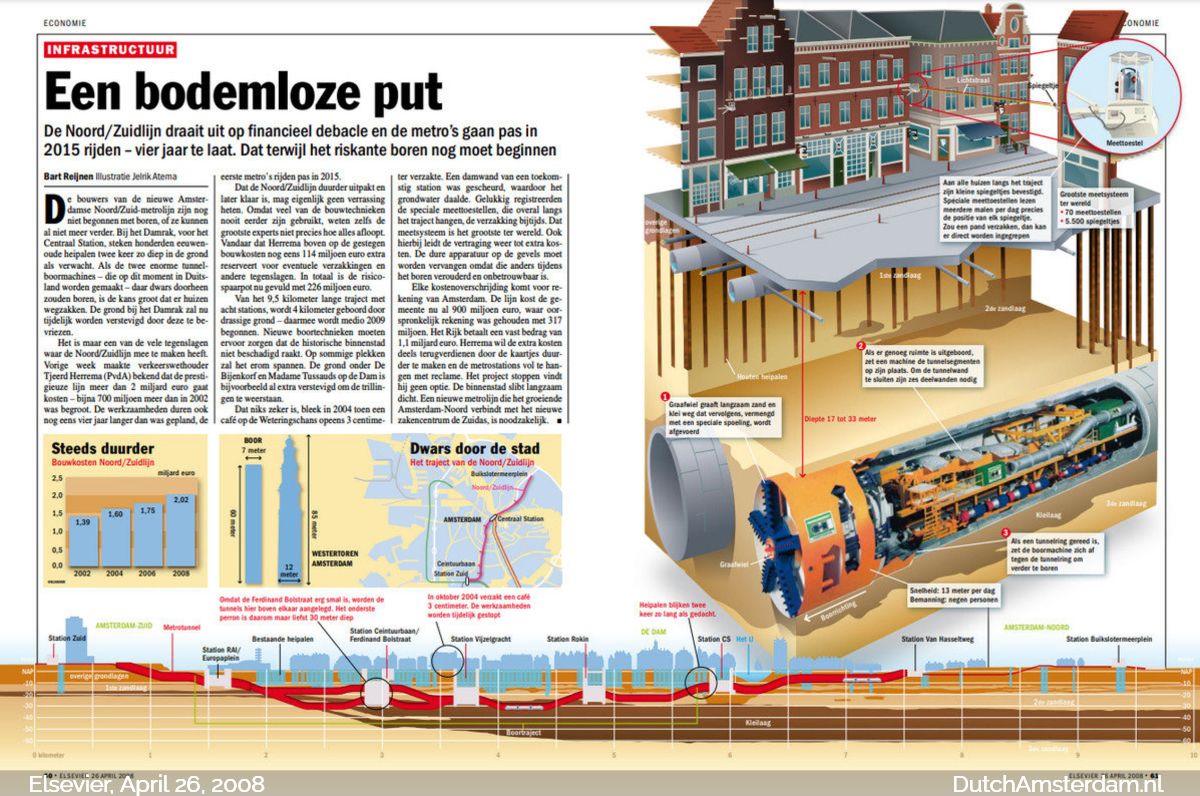 Article from Elsevier, April 26, 2008. Describes the cost overruns for the Noord/Zuidlijn, as well as problems faced during the much delayed metro tunnel drilling process. Click image for a PDF file hosted at the Internet Archive.

Construction of the new line started in 2002, and was scheduled to be completed by 2011, at a cost of EUR 1.4 billion. The federal government agreed to pay EUR 1.1 billion, while the City of Amsterdam would pay EUR 300 million plus any unexpected additional costs.

Subsequently budgetary setbacks, disputes with the construction company, and structural damage to buildings along the route of the project led to many delays. By now the North-South line is to be completed in 2017, at an expected cost upwards of EUR 2.1 billion — which means the City will have to come up with more than three times the amount originally estimated.

News of an estimated additional EUR 290 million was the straw that broke the camel’s back for Herrema.

In April, 2008, local newspaper Het Parool labeled the metro project “a bottomless pit.” At the time Herrema blamed former city officials for being overly positive. He said that when it comes to mega-projects they have a tendency to demonstrate “tunnel vision”.

Last December NRC Handelsblad reported that the City had, in its contracts with builders, deliberately used lowball estimates instead of calculated costs. The newspaper said this was the only way the project could have been procured within the budget.

The worst is yet to come

The North-South line is designed to run from Amsterdam-North to the Zuidas (literally, South Axel) — a large, rapidly developing business district. Also known as the ‘Financial Mile’ the district is situated just minutes from Schiphol airport.

Politicians and city planners consider the project ‘indispensable’ for the future of Amsterdam, in large part because it allows a growing work force in the north of the city to reach employers in the south without having to use cars. Driving in the city — whose centuries-old streets were not designed with cars in mind — is a nightmare, and even driving around it on the so-called ‘circle road’ often is barely possibly due to daily traffic jams.

The North-South line will be the first metro to run underneath the IJ, the water channel that separates Amsterdam-North from the city’s center. 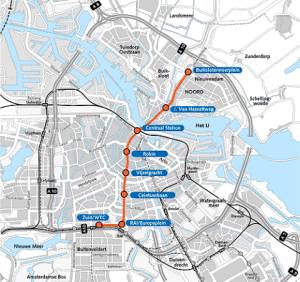 Route of the North-South line

Most of the buildings in old Amsterdam are built on a foundation of wooden poles driven deep into the soggy, sandy ground. This makes trying to dig a metro tunnel a dangerous prospect. Builders have developed — and are still developing — countless new, untried technological solutions.

In July, 2008, four buildings were damaged when a dam alongside the construction area for the Vijzelgracht station had sprung a leak. This lowered the level of groundwater, causing the ground on which the historic houses were built to become unstable, allowing the houses — considered monuments — to sink several centimeters. In September that year the construction work resumed, with a spokesman for the project assuring viewers of local TV station AT5 that occupants of the buildings alongside that stretch of the project had nothing to worry about.

While city officials and metro experts has at first assured people that this type of damage would not occur, opponents have always said that it would.

Later, city officials warned that a certain amount of damage can not be avoided. Last December Herrema said the worst years are yet to come while builders learn how to use newly developed techniques on the job.

Newly performed research — commissioned after several homes subsided — has shown the risks associated with the project are far higher than officials have estimated.

Asked for their opinion on the whole project, many Amsterdammers use ‘colorful’ terms about those responsible. Among the few that are printable the somewhat low-key “amateurish” appears to be the favorite — referring to anything from the City’s financial dealings to the contractor’s workmanship.

In September, 2008, a report by the Deltaris institute stated that the dam walls built to facilitate the construction of the Vijzelgracht station are of “exceptionally poor quality.”

These walls serve a two-fold purpose: they keep ground water out of the building site, while maintaining the normal groundwater level outside the wall. If a leak is sprung, the level of the groundwater outside the wall lowers, and the resulting change in pressure causes nearby houses — with their foundation of wooden pillars — to sink deeper into the sand.

Researcher Frits Tol said the walls ‘do not meet professional standards.’ No less than 80 weak spots were found.

In its report, Deltaris said German contractor Max Bögl and its sub-contractors have also been negligent. Instructions from city-employed supervisors regarding the repair of the leakages sprung in September were not followed up correctly.

Meanwhile the City has already said that if and when the North-South line ever rides, tickets will be more expensive than for the rest of Amsterdam’s public transport system.

An Amsterdammer last updated this post on Tuesday, December 8, 2020, at 7:07 AM CET (Central European Time)