DutchAmsterdam.nl — A number of brothels in the Singel canal area — in downtown Amsterdam but outside the main Red Light District — were closed recently as part of a project to clean up the historic city center.

Coffeeshop The Other Place, which was owned by a former Hells Angels leader, has been closed since 2006
© Copyright DutchAmsterdam.nl. Want to use this photo?

After closing brothels in the Korsjespoortsteeg and the Bergstraat Alderman Lodewijk Asscher, who oversees the project, has now let the town council know by letter that he sees no need to close the remaining 47 windows in that area.

Coalition Project 1012 — named after the postalcode for central Amsterdam — was launched in December, 2007. At first welcomed by many Amsterdammers, the ambitious project has met with increasing criticism.

Many Amsterdammers, including town council members, now think Asscher overreached his brief — closing more windows in the Red Light District than strictly necessary. Many of the closed brothels have been turned into fashion-, jewelry- and art galleries in what locals consider an attempt to gentrify the area.

The smaller Red Light area at the Singel canal is home to, for the most part, self-employed and older prostitutes, some of whom have worked in the business for 30 years.

In the original Project 1012 plan, brothels would be allowed only in the direct vicinity of the Oude Nieuwstraat and the Oudezijds Achterburgwal, situated in the main Red Light District. Town council members agitated against the planned closure of all windows in the Singel area — particularly because
prostitution there does not involve human trafficking and other abuses. 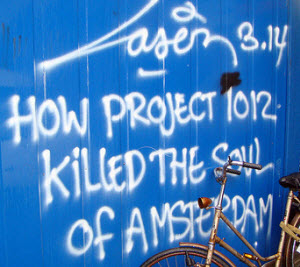 Project 1012 also calls for the closure of 26 of the 80 coffeeshops in the Red Light District.

In his letter to the town council Alderman Asscher in his letter wrote that the closure of these 26 coffeeshops can possibly take place in a lower tempo than initially planned.

By granting the 26 shops slated for closure a one-time, three-year permit extension closures will take place between three and six years from now.

Category: News, Red Light DistrictRelated to: brothels, Coffeeshops, Project 1012, Red Light DistrictThis article is updated regularly. Last major update: March 9, 2009
Last minor update: Sunday, September 25, 2011 at 1:09 PM, Central European Time (CET)
Transparency:
The DutchAmsterdam website includes affiliate links. That means we get a small commission — at no additional cost to you — for each purchase you make. Your support helps us provide this site free of charge. Naturally, as our Editorial Policy states, our content is never influenced by our advertisers or affiliates.