Our favorite square in Amsterdam

DutchAmsterdam.nl — The Nieuwmarkt, in the old center of Amsterdam, is one of the city’s oldest and most popular squares.

In all of Amsterdam this is the favorite square for the members of the DutchAmsterdam team.

Here’s one thing you’ll notice all over town: Give Amsterdammers just the tiniest hint of sunshine, and you will find us sitting outside — preferably on a terrace and nursing a beer. Never mind the actual temperature. 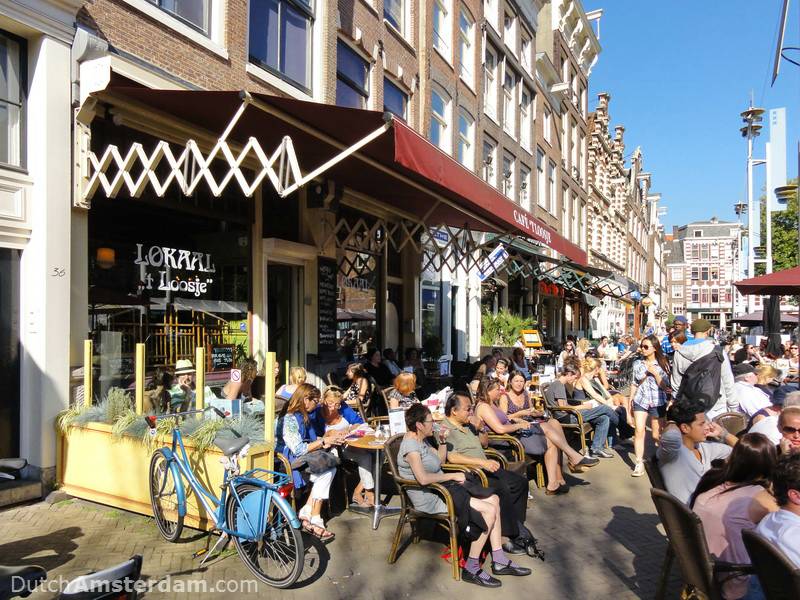 Outdoor terrace of café ‘t Loosje, at the Nieuwmarkt in the old center of Amsterdam

The bustling square hosts a small daily market, a larger biological market on Saturdays, and — during the summer months — a Sunday market with antiques, bric-à-brac, and books.

While the Nieuwmarkt borders the Red Light District, it has a family-safe atmosphere — with no red lights or related businesses in evidence.

The square is also on the outskirts of Amsterdam’s Chinatown. The views are typically Amsterdam, though: a mixture of old and new — from the beautiful centuries old gabled houses to the modern structure of a retirement home, and from the castle-like former city gate to the Gaudi-like furniture facing the water of the Kloveniersburgwal. 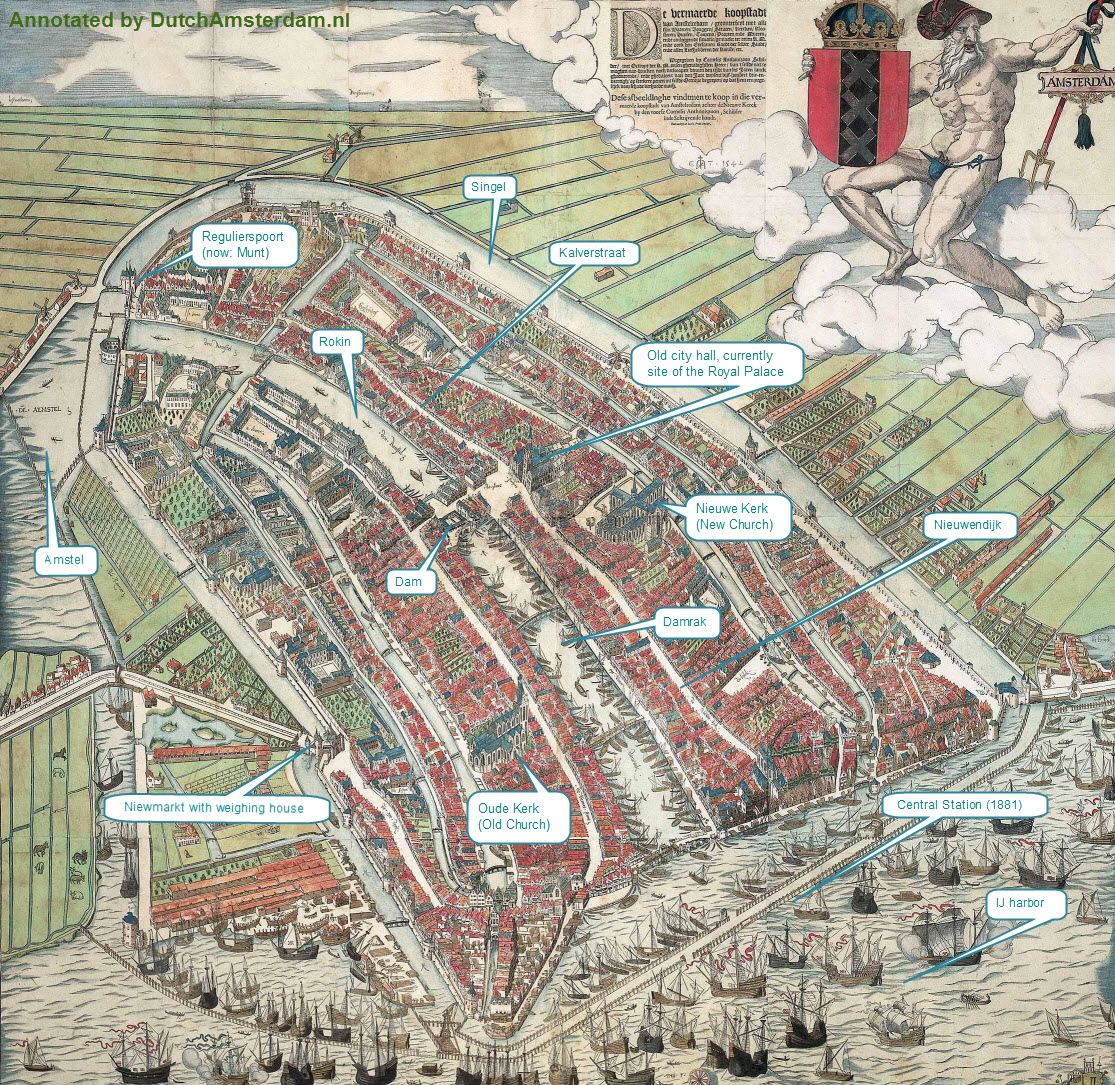 See Nieuwmarkt on this 1544 map of Amsterdam by Cornelis Anthonisz. Click here for a much larger version.

Nieuwmarkt is dominated by De Waag, the former Sint Antoniespoort — St. Anthony’s Gate, which used to be part of the Medieval defense walls built in 1481. Further north that wall included the Schreierstoren.

The building carries the oldest gable stone in Amsterdam, in one of its towers. It reads, On 28 April 1488 the first stone of this gate was laid.

Interestingly, that date turns our to be incorrect, as Amsterdam’s city archives include references to the gate prior to that date. Historians believe the building actually was erected in 1425, which is when the Geldersekade and Kloveniersburgwal canals were dug.

The date on the gable stone likely refers to one of the many additions made to the original building over time. 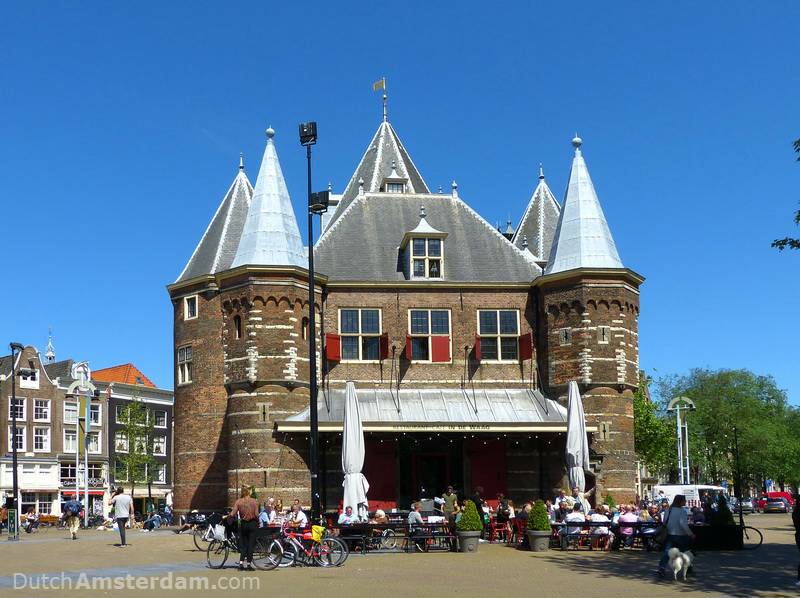 De Waag, the former weighing house, believed to have been built in 1425 at Nieuwmarkt

The Waag lost its defensive function in the early 17th century, when the walls were demolished. The moat around the building was filled in and the ground level raised.

The building was subsequently converted into a weighing house (Waag = weighing scales), meant to take the pressure off of the weighing house at Dam Square, which has become too small for the flow of goods coming into the city.

A portion of the Kloveniersburgwal canal to the south of the building was also filled in, thus creating enough space for a market. This market was initially called Sint Antoniespoortmarkt.

Small merchant ships and other vessels — which ferried goods from larger boats anchored in the nearby harbor — would sail up de Geldersekade.

Once unloaded, the goods were weighed and then either sold at what Amsterdam locals referred to as the ‘new market’ (new market; now Nieuwmarkt), or distributed to warehouses.

Anchors and artillery from nearby shipyards were also weighed at the De Waag.

Incidentally, the water of Kloveniersburgwal still flows into the Geldersekade via an underground channel.

The upper floors of the building housed four guilds, catering to painters, masons, surgeons and smiths. Each guild had its own entrance tower.

In the Theatrum Anatonicum surgeons would dissect bodies during their anatomy lessons. In 1632, Rembrant van Rijn was commissioned to paint the surgeons during their annual public dissection. This event was open to paying members of the public. The body to be used at this event had to be that of an executed criminal.

While Rembrandt, 26, at the time already worked for well-off customers, the resulting painting — The Anatomy Lesson of Dr. Tulp — made his name.

In 1990 De Waag was handed over to a foundation that, fortunately, went bankrupt before it could fully carry out its plan to partially destroy the building in order to make room for an addition designed by French architect Philippe Starck.

Amsterdam’s citizens were eventually able to convince city council not to squander the historic building.

Instead of falling victim to architectural insanity, De Waag was restored. It currently houses Restaurant-Café In De Waag. 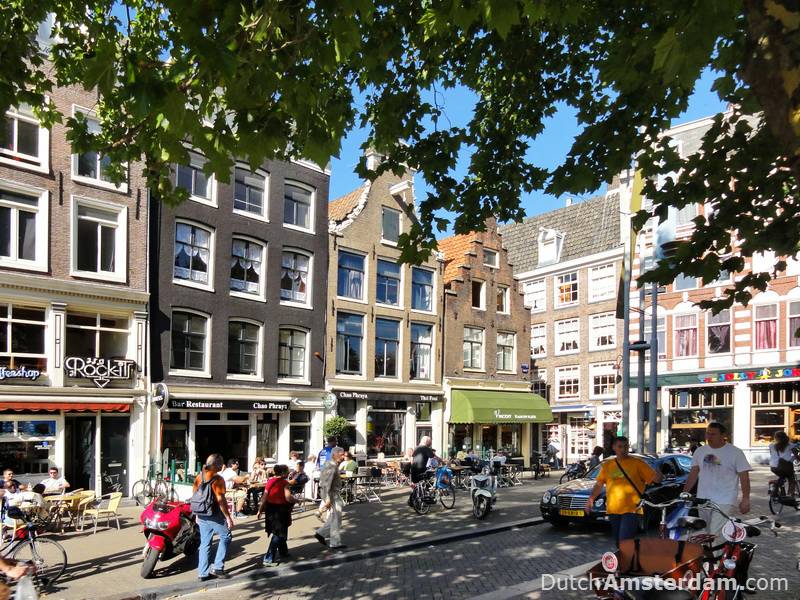 Shops, coffeeshops, and eateries at Nieuwmarkt in downtown Amsterdam

The neighborhood south of the square used to have a high concentration of Jews, earning the city the nickname “Jerusalem of the North.” During the Second World War, Nazi soldiers used the Nieuwmarkt as a collection point for Jews who had been rounded up to be sent to Germany’s concentration camps.

In the Seventies the Nieuwmarkt neighborhood saw heavy rioting when the city demolished many houses to make way for a the metro. A highway had also been planned to run through the neighborhood. (Amsterdam’s politicians and civil servants tend to be rather destructive…).

While the metro was eventually built, plans for the highway were abandoned shortly after the 1975 riots.

How to get to Nieuwmarkt

We prefer getting there via the Zeedijk [red route], which is far less crowded than the alternative route from Dam square [green route].

Either route shown takes you around the Red Light District.

The only public transport to and from Nieuwmarkt is the metro. Look for the ‘Nieuwmarkt’ stop.

Does your travel guide further a myth about Schreierstoren?

This article was originally published in July 2009, and is updated from time to time.