Amsterdam, Sep. 7, 2009 (DutchAmsterdam.nl) — The city of Amsterdam wants to make haste with its efforts to clean up its world-famous Red Light District.

To make this possible the city will soon change the zoning plan for the district. So says Pierre van Rossum, who heads up Project 1012.

Named for the postal code for much of the historic center of Amsterdam, the controversial project is meant to spruce up all of downtown Amsterdam. 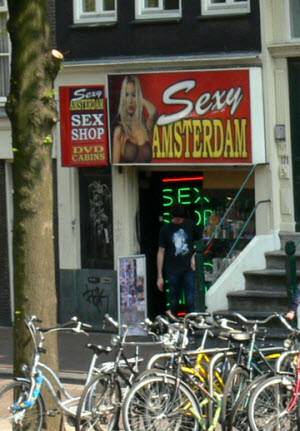 Shop in Amsterdam’s Red Light District
© Copyright DutchAmsterdam.nl. Want to use this photo?

It includes plans to drastically reduce the number of ‘windows’ behind which prostitutes offer their services, and to close down many shady businesses. In its place the city envisions fashion studios, art galleries, trendy cafes, small-scale restaurants, and a variety of shops.

In this way Amsterdam’s leaders hope to curtail human trafficking and money laundering, while transforming downtown Amsterdam into a ‘Red Carpet entrance into the city.’

The municipality targets establishments it considers to be ‘crimogene‘ — a term used to describe functions that encourage ‘promotion or advancement of — or susceptibility to — criminality.’

While coffeeshops are licensed to sell soft drugs, it is technically not legal to grow and supply commercial quantities of cannabis.

Since police is increasingly successful at finding and dismantling illegal cannabis farms, coffeeshops have more or less been forced to deal with criminal organizations whose large scale growing- and smuggling operations guarantee a steady supply.

As part of Project 1012 the city plans to reduce the number of coffeeshops in downtown Amsterdam from 76 to 50 over the next three to six years.

Project leader Pierre van Rossum says he and his colleagues will meet with the owners or brothels and coffeeshops whose businesses are affected. The municipality actively helps by introducing potential buyers, including housing corporations.

A small number of brothels may move to Oudezijds Achterburgwal, one of the areas in which prostitution windows will still be allowed.

The city itself has also bought some of the buildings — turning many of them over to fashion designers.

According to Van Rossum the owners of coffeeshops could possibly receive some financial aid if they are willing to change their business into, say, a coffee house or or an icecream parlor.

At the introduction of Project 1012, in December 2007, alderman Lodewijk Asscher said the city wants to recapture the historic city center in order to “give it back to the Amsterdammers.” 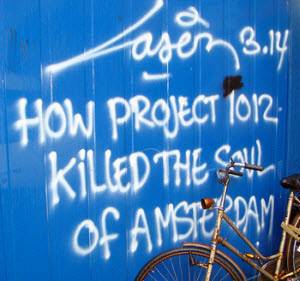 Well-known graffiti artist makes his feelings about Project 1012 known
© Copyright DutchAmsterdam.nl. Want to use this photo?

Since then 109 of the 482 brothel windows have been bought up. Many of them have already been repurposed, among other things housing small businesses, fashion studios, art galleries and internet companies.

Not everyone is happy with the project. Many Amsterdammers are afraid that the characteristic “look and feel” of the Red Light District is deliberately being damaged by what they see as the City’s attempt to gentrify the area.

They prefer to see municipal leaders leave the Red Light District alone — as well as abandon other expensive prestige projects, such as problem-plagued North-South metro line in favor of addressing issues such as street crime and hooliganism.

Business owners affected by Project 1012 feel stigmatized by the city’s ‘crimogene’ label. And advocacy agencies for prostitutes fear the closure of many brothels will drive large numbers of prostitutes underground.

Meanwhile the users of many international online forums dedicated to discussions about Amsterdam’s coffeeshops or the Red Light District protest that the city’s plans mean they will likely visit Amsterdam less often, if at all.

That may actually be music to the ears of Project 1012 supporters, who — it is thought — would instead prefer to see an increase in the number of rich tourists who spread through downtown Amsterdam from their landing spot at the nearby cruise ship terminal. — DutchAmsterdam.nl

An Amsterdammer last updated this post on Saturday, November 30, 2013, at 8:30 AM CET (Central European Time)