DutchAmsterdam.nl — Built 1892 in the center of a nineteenth-century neighborhood of Amsterdam known as the Plantage, the Hollandsche Schouwburg (Dutch Theatre) long was a house of culture and entertainment.

Formerly, the home of Dr Westerman, a director of Artis — the Amsterdam Zoo — stood on this spot, and during the first two years of its life the building was known as the Artis Theatre.

At the time it was the largest and most luxurious theatre in the area, and during the opening someone declared, The temple is completed! Whatever may fall and decay, Artis Theatre will live forever.

Operettas were performed here to much acclaim. However, two years later fierce competition from other theaters led to the bankruptcy of the Artis Theatre.

From then on, the building was known as the Hollandsche Schouwburg.

The theatre was located at the outskirts of what back then was the old Jewish quarter of Amsterdam. So many Jews lived in Amsterdam that the city was often referred to as the “Jerusalem of the North.”

Then came the Second World War. Given the large number of Jews among both the theater’s performers and audience, the German occupiers renamed the building Joodsche Schouwburg (Jewish Theatre). 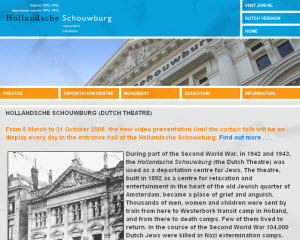 Later, in 1942 and 1943, Nazi thugs used the building as a prison and as a deportation center for Jews, turning it into a place of grief and sorrow.

60.000 to 80.000 men, women and children were deported from here — first to either the Westerbork or the Vught transit camps in Holland, and from there to Nazi Germany’s death camps at Auschwitz, Bergen-Belsen or Sobibor. In Amsterdam Jews spoke of Westerbork as the ‘first circle of hell.’

The building was unsuitable to house the hundreds of people the German criminals herded into it. One wartime diary mentions a time when 1,300 people shared the cramped place — creating an oppressively hot, smelly atmosphere. Together they shared just five toilets and one or two wash basins.

In October 1942 the Germans turned a nursery across the street into an annex of the Hollandsche Schouwburg. Children up to the age of twelve, separated from their parents, had to wait there to be deported. Four underground resistance groups were able to save some 600 children by smuggling them out of the nursery.

However, few of the Jews who were deported lived to return.

Over the course of the war, 104.000 Dutch Jews were murdered in Nazi extermination camps.

Naturally, after the war no one was interested in using the Hollandsche Schouwburg in its former function as a theater.

Instead in 1961 the building was demolished, except for the facade and the area immediately behind it — a skeleton of crumbled brick walls.

1962 the Hollandsche Schouwburg was transformed into a war memorial in remembrance of the Jews who perished under the Nazi regime.

On the ground floor is a memorial garden and memorial chapel with an eternal flame. Behind a 10 meters high pylon placed in the location where the stage used to be, a Wall of Remembrance is engraved with 6,700 family names. Each surname occurs only once, and together the names stand for all the 104,000 Dutch victims of the persecution of the Jews — thus raising them out of anonymity.

The first floor includes an impressive exhibition documenting the German persecution of the Jews in the Netherlands.

The permanent exhibition in the Hollandsche Schouwburg, titled Persecution of the Jews 1940-1945 can be seen on the first floor.

Using photographs, video images, objects and a maquette, a picture has been composed to show the gradual development of discrimination against Jews during the Nazi occupation of the Netherlands; initially exclusion from certain social activities, then deportation and extermination.

The persecution process is laid bare. The killings of Dutch Jews didn’t begin with extermination camps â€“ it started long before, with small bureaucratic measures to be publicly implemented in Dutch cities, towns and villages.

The exhibition also uses personal documents to explore for instance the work of the Dutch resistance in saving lives of Jews, accounts of escapes, the production of forged identity papers for Jews, and ‘submerging’, that is, going into hiding.

The Hollandsche Schouwburg building, that played a major role in many of these activities, is a background actor in these presentations. The exhibition room looks out onto the inner courtyard, where formerly the theatre auditorium stood; where countless innocent people were held prisoner.
– Source: Hollandsche Schouwburg

During the National Remembrance Day, annually on May 4, a ceremony is held at the Hollandsche Schouwburg and many other locations throughout the Netherlands.

The Hollandsche Schouwburg is open daily from 11 a.m. to 4 p.m. (Closed on Yom Kippur, the Jewish Day of Atonement).

Use tram Tram 9 and 14, stop Plantage Kerklaan, or
the Metro, stop Waterlooplein.

• Check out these other attractions in The Plantage district

Category: MuseumsRelated to: Hollandsche Schouwburg, museum, Plantage, war memorialThis article is updated regularly. Last major update: September 25, 2009
Last minor update: Thursday, January 16, 2020 at 3:51 AM, Central European Time (CET)
Transparency:
The DutchAmsterdam website includes affiliate links. That means we get a small commission — at no additional cost to you — for each purchase you make. Your support helps us provide this site free of charge. Naturally, as our Editorial Policy states, our content is never influenced by our advertisers or affiliates.