Home > What to See and Do > Begijnhof – Amsterdam Beguinage

Begijnhof – ‘a haven of peace and tranquility’

Founded sometime in the 14th century for the Beguines, members of a lay Catholic sisterhood, the Begijnhof is one of Amsterdam’s oldest inner courtyards — and one of the city’s best known landmarks.

It consists of a collection of historic houses, a chapel — nowadays home to ‘The English Church’ (English Reformed) — and a hidden Catholic church. There are two greens (in the past used for bleaching clothes) and a handful of shade trees.

Though its situated steps away from the busy Kalverstraat shopping street, the Begijnhof is a remarkable oasis of tranquility. 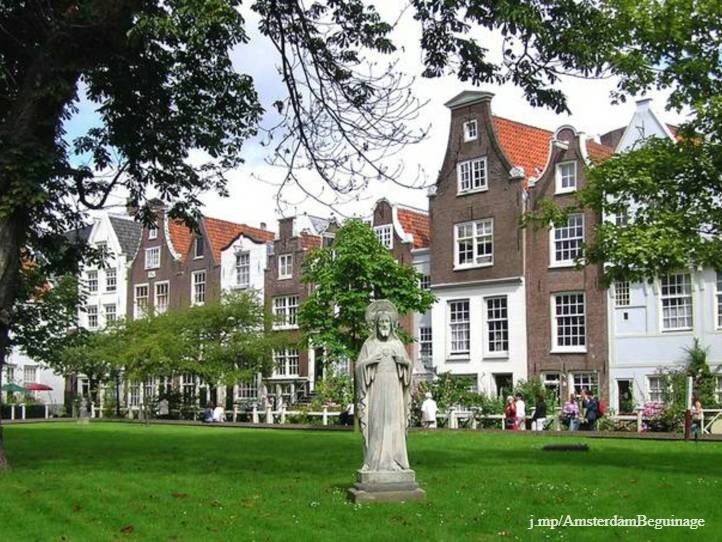 Begijnhof, Amsterdam, photographed when visitors still had access to the entire courtyard. Currently the area open to the public is restricted.

Originally built in the Middle Ages, the Begijnhof is at medieval street level — about a meter below the rest of the old city center.

At first it was encircled by water — the Nieuwezijds Voorburgwal canal in the west, the Spui — at the time part of the locks — in the south and the Begijnensloot (Beguines’ Ditch) north and east.

The sole entrance was located at the Begijnensteeg (“Beguines’ Alley”) with a small bridge across the ditch. In the 19th century, long after the canals and ditches were filled in, an entrance at the Spui — now a lively square — was added.

Unfortunately, the effect of mass tourism in Amsterdam does not bypass the Begijnhof. Hence peace and tranquility is at times a little harder to achieve. So here is a word to the wise if you want to see the beguinage at its best…

Quietest time to visit: Thursday through Sunday, just after it opens (9 am).

The official website of the Begijnhof says that in about 1150 a group of Amsterdam women came together to form and live in a religious community. These were, in effect, the first beguines — although the name was not yet used.

They could renounce their vows at any moment and leave the Beguinage, for instance, to get married, the site says.

In the 13th and 14th centuries there were in fact groups of Beguines — and Beghards, their male counterparts — to be found in what are now France, Belgium, the Netherlands, Western and North-Western Germany. Consequently, the Begijnhof in Amsterdam is not the only inner courtyard that bears that name. 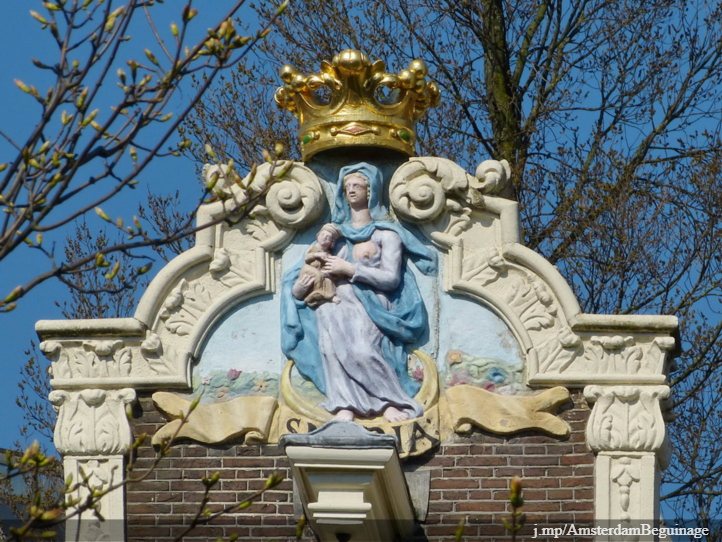 The 18th century bell gable of the house at Begijnhof 27 is elaborate decorated. The high relief depicts the virgin Mary with child, underneath a large, ‘golden’ crown. The text ribbon says S.MARIA

At number 34 at the southwest edge of the Begijnhof — in the area accessible to all — is what most tourist guides still describe as the oldest house of Amsterdam. Until recently its facade was thought to date back to the 1470s. It was also believed to be the oldest wooden house in the Netherlands.

However, research done in 2010 brought to light evidence that the house was build in, or shortly after, 1528.

Even then the ‘Houten Huys’ (old Dutch spelling for ‘wooden home’) remained the city’s oldest.

But in June, 2012 the city announced that an even older house has been located.

The English Church and a Hidden Catholic Church 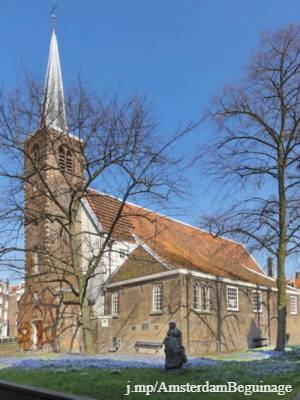 The English Church at Begijnhof in Amsterdam

After the Alteration — a takeover in which the Catholic city turned Protestant in a bloodless revolution — the Begijnhof was the only Catholic institution to remain in existence because the houses were the beguines’ private property. In addition the beguines were, strictly speaking, not part of a religious order.

However the beguines were forced to surrender their Chapel which, two decades later in 1607, was handed to English worshippers. To date, this English Reformed Church of Amsterdam still has its services at this location.

To Amsterdammers it is known simply as “The English Church” — which is also how Vincent van Gogh, who visited the church a number of times, referred to it.

Writing to his brother, Theo, in November 1877, Vincent says

Tomorrow morning I’ll go to the little English church you know, it lies there so peacefully in the evening in that quiet Begijnhof between the thorn-hedges, and seems to be saying ‘In loco este dabo pacem’, that is ‘in this place will I give peace’, saith the Lord. Amen, be it so.
– Source: Vincent van Gogh, To Theo van Gogh. Amsterdam, Saturday, 24 and Sunday, 25 November 1877.

Earlier he wrote that he was “very fond of that little church.”

Anyway, having lost their chapel the beguines first continued their worship in the sacristy, until that, too, was appropriated. They then worshiped in one of the houses in the yard — using a different house from Sunday to Sunday.

At the initiative of the parish priest, in 1665 two of the houses — at numbers 29 and 30 — were bought and joined together, and in 1671 the first stone was laid for a new chapel inside the resulting property.

The chapel — for which the city had approved the building plans, as long as the building did not look as a church on the outside — opened for its first service in 1682.

That the city approved the building of a hidden church is not surprising. Tolerance, the pragmatic Amsterdammers knew, is a good for trade.

The last of the Beguines died in May, 1971 so strictly speaking the Begijnhof is no longer a beguinage.

However, it is still private property, and like back in the old days, the courtyard’s bylaws prescribe that only single women are allowed to live there.

Until a few years ago one used to be able to roam the entire courtyard. Nowadays the largest section, a path around the biggest of the two greens, is closed off — accessible only to occupants, though the section can still be observed.

This change was necessary to preserve some measure of privacy. Many of the women did not appreciate having a constant stream of tourists — at one point counting 800.000 visitors a year — saunter up to their living room windows in order to stare inside (or even film and take photos).

Too, organized tours became increasingly disruptive with tour guides shouting, sometimes through megaphones, their version of the Begijnhof’s history over the heads of large groups of noisy tourists.

A few years ago extensive discussions took place between the organization that operates the Begijnhof (and wanted to close the courtyard to all visitors) and City Hall, which wanted to make sure that tourists continued to have access. 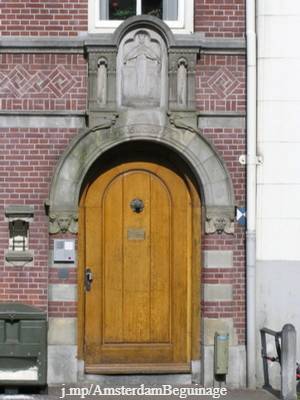 The entrance to Begijnhof at Spui, Amsterdam

Visitors to the courtyard are requested to keep noise down to a minimum: no loud talking, no playing children

Tour groups and excursions are not allowed inside, and even a lonely couple reading to each other from a guidebook is sometimes met with a loud ‘ssssshhhh!’ And for a while there was one obnoxious woman who, much to the embarrassment of her neighbors, loudly attacks ‘intruders’ with a stream of verbal abuse.

In February 2002 the Begijnhof Foundation announced plans to charge an access fee in order to minimize nuisance. However, Amsterdam city authorities made clear that while the courtyard is largely private property the paths and public space belong to the City of Amsterdam. By law access to public areas and public institutions — in this case the churches — must be unhindered.

In subsequent court cases the City was deemed to be incorrect in her assertion that the paths were to be considered public space. Since the courtyard has always been locked at night, the paths must be considered private property.

Despite the legal pronouncements, the controversial chairwoman of the city’s Center borough at the time vowed to continue her fight against the Begijnhof Foundation. But eventually cooler heads prevailed and the current situation — in which the foundation does allow access to individual tourists, though with restrictions — is a result of compromise and common sense.

A sign posted at the entrance states that the Begijnhof is a spiritual center, as well as private property. It tells visitors to respect the peace, silence and privacy of its inhabitants. Groups, tours, filming, photography, bicycles and dogs are not allowed.

However, in practice, non-intrusive filming and photography by private individuals is tolerated.

Meanwhile the foundation must not impede access to the English Church on its property, and therefore the gate must be open half and hour before and up till half an hour after each service or event at the church.

In the end, one thing is clear — and we’ll state in here in the plain, direct language Amsterdammers are known for: tourists and other visitors must behave in such a way that they don’t screw things up for others. 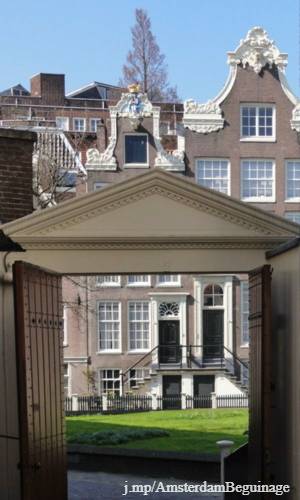 Founded in the 14th century the Begijnhof beguinage is a haven of peace and tranquility in the center of medieval Amsterdam.

After 17.00 (5pm) you can reach the chapel — only if your are attending a church service or event there — via the gate at the Spui.

View Begijnhof in a larger map

An Amsterdammer last updated this post on Friday, November 3, 2017, at 11:36 AM CET (Central European Time)