Amsterdam is beautiful any time of the year, and January is no exception — provided you dress for the occasion.

According to the Royal Netherlands Meteorological Institute (KNMI1), January is the coldest month in most of the Netherlands. Along the sea coast February is slightly colder yet, when the water of the North Sea is at its coldest. 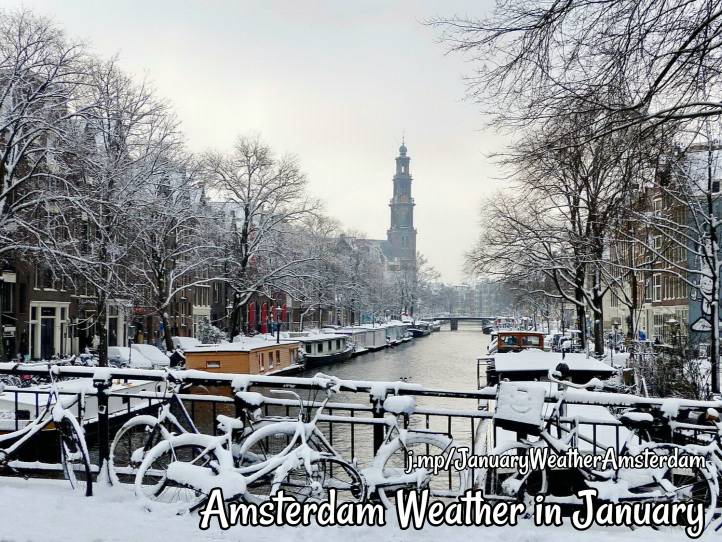 The Prinsengracht — with the Westertoren — in the snow.

Normal Amsterdam weather in January is like this: the average temperature is 2.7º Celsius (36.68º Fahrenheit). That’s cold, especially when there’s a stiff wind. It’s a rainy month as well.

You can also expect anywhere from five to eight days of snow — which looks wonderful.

As a service to our readers we update this weather forecast throughout the month of January.

During the rest of the year the general information on this page will tell you what kind of climate and weather to expect — and what to pack when you visit Amsterdam in January.

Keep in mind that the feels-like temperature (windchill factor) tends to be 3-6 degrees lower than the values listed.

Average Amount of Sun and Rain

In January you can expect an average of 1.5 hours of sunshine a day, and a total of 60 mm (2.4 inch) of rain during the entire month.

Things To Do in Amsterdam in January

Even in January, lots of tourists visit Amsterdam. Book museums, excursions and activities ahead of time:

Hotel prices are relatively low during this time of the year. Take advantage by booking your hotel as early as possible.

Sunshine — but not much

On average there will be 50 hours of sunshine — spread out over the entire month.

That said, while you may see many gray and gloomy days, from time to time there will be several hours worth of blue, cloudless skies. When that happens grab the opportunity to take postcard-perfect photographs of Amsterdam’s sunlit streets and canals.

Since the trees are bare, many canal-side façades that normally are somewhat hidden from view by the foliage are now more easy to see. 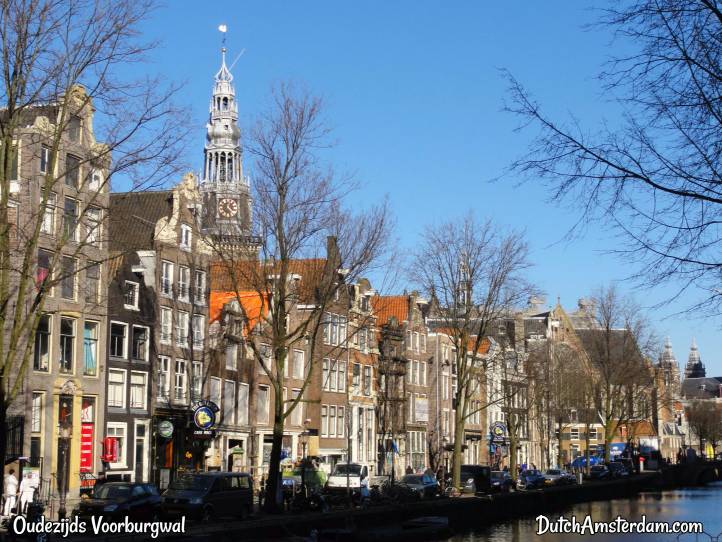 Oudezijds Voorburgwal, with the tower of the Old Church. Note the gables, which are normally hidden by the leaves on the trees.

Mind you, we’re talking averages here. January can be much colder or much milder. January 2007 was so mild that if confused birds, plants and trees into acting like it was spring. Conversely, January 2010 turned out to be one of the snowiest in a long time.

January 2014 was very mild, as was the entire year. (In fact, 2014 was the warmest year since the weather service started keeping track three centuries ago).

2018 brought us a rather mild January, with hardly any snow (we had a huge snow storm in the previous December, one for the record books) — with high temperatures well above those normal for the month.

Is it global warming? Who knows, but January 2019 was yet another rather mild one. There was one day of snow, though.

As always, go with the flow. Plan to see some of Amsterdam’s many museums during inclement weather.

Tip: Films shown in Dutch movie theaters are shown in their original languages — subtitled in Dutch.

What to wear in Amsterdam in January

TIP: In case of snow or ice, road salt is spread on nearly all the streets — certainly at key points such as bridges and crossings.

Protect your shoes with a waterproof spray.

Salt spots can be removed with a cloth and some vinegar.

Warm clothes are a must, and you will want to wear a winter proof/waterproof coat or jacket.

A good, windproof hat is not a luxury and no one will look at you funny if you happen to be wearing earmuffs.

Complete you outfit with a warm scarf and gloves.

As always, dress in layers because restaurants, café’s and homes are well-heated.

That said, you may want to consider wearing long johns or thermal underwear. You’ll thank us when you’re waiting for a bus or tram in the biting cold.

The weather during other months

Would you rather visit us during another time of the year? Check the weather page roundup, which includes details about our climate during the other months of the year.

Category: WeatherRelated to: climate, January, WeatherLast updated: Monday, February 15, 2021 at 5:53 AM, Central European Time (CET)
Transparency:
The DutchAmsterdam website includes affiliate links. That means we get a small commission — at no additional cost to you — for each purchase you make. Your support helps us provide this site free of charge. Naturally, as our Editorial Policy states, our content is never influenced by our advertisers or affiliates.