DutchAmsterdam.nl — Amsterdam Mayor Job Cohen today resigned effective immediately. He did so after Labour Party leader Wouter Bos in a surprise announcement this morning said he is retiring from politics — and suggested his leadership should be handed over to Cohen.

Former finance minister Bos told a press conference in The Hague the Netherlands needs a leader who will unite its citizens, rather than drive them apart, reports NRC Handelsblad.

“I have always believed this,” Bos said. “But I no longer think I should be the one leading Labour.” 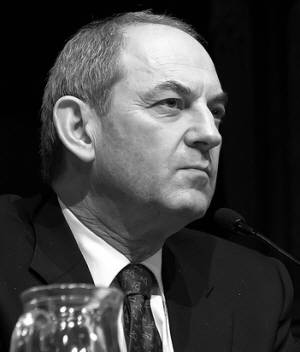 Bos” Labour party is currently the second largest in Dutch parliament. It did not fare well in the March 3 local elections, but opinion polls show it is one of the contenders to become the biggest force in parliament after the June 9 national elections, NRC Handelsblad writes. [1]

I Am An Amsterdammer

Cohen announced his decision to resign as Mayor of Amsterdam and to become a candidate for the position as leader of the Labour Party at a 3pm press conference. He apologized for his sudden departure, calling his resignation a sacrifice since he considered being Mayor of Amsterdam “The greatest position I’ve ever had in my life.”

“Over the past few years I have become an Amsterdammer,” Cohen said, adding “I will always remain one.”

He was born in Haarlem on Oct. 18, 1947 to parents who were members of the local liberal Jewish community.

On 2 July 1993 he became State Secretary (Deputy Minister) of Education in the third cabinet of Ruud Lubbers. The term of this post expired after a year and Cohen returned to his post in Maastricht. However he remained as a member of the Senate. Cohen began a sabbatical year on 1 January 1998, but in February took on the function of interim-director of the broadcasting organization VPRO, lasting until 15 August. On 13 August he resigned from the Senate to take up the position of State Secretary in the Ministry of Justice in the second cabinet of Wim Kok, dealing chiefly with immigration. In this capacity he was responsible for a new immigration law, intended to restrict entry of refugees to “genuine cases”. [2]

He resigned his position as State Secretary on December 31, 2000 in order to take up the position of Mayor of Amsterdam (burgemeester) on January 15, 2001. [3] At the time he said his ambition was to ‘keep things together.’

His moderate response to the savage murder of film maker Theo van Gogh, by Muslim extremist hate criminal Mohammed Bouyeri led TIME magazine to name him as one of the European Heroes of 2005.

Naming him as one of its three ‘hate busters’ of 2005, the magazine writes that

“But Cohen was not about to let this outrage pass in silence. He called on Amsterdammers to “kick up a ruckus and make yourselves heard”,” Time writes.

An estimated 20,000 people assembled on Dam Square and banged pots and drums to protest at the killing.

“The Muslim community did not need to be asked. They took the initiative themselves to join in and condemn the murder,” Cohen says.

Time says the “inflammatory tone and language” of some Dutch politicians alienated the country’s almost one million Muslim minority, while Cohen’s inclusive approach was widely credited with helping keep reprisal attacks against the Muslim community in Amsterdam so low.

In 2006 Cohen was the runner-up in the World Mayor Awards. World Mayor praised Cohen’s leadership following the murder of Theo van Gogh in 2004, and his efforts at bringing together the diverse population of Amsterdam.

Tea Drinking as an approach to serious problems

On the other hand, many Amsterdammers have not been enamored with Cohen’s lackadaisical approach to serious problems.

For instance, Amsterdam has been confronted with a countless crimes committed by, more often than not, young Moroccans who engage in hooliganism and criminal behavior.

Cohen’s suggestion that we should “drink tea” with their parents — in order to gain an understanding of where things go wrong — has become a phrase of derision among those who decry his soft-handed approach.

In his book, Murder in Amsterdam — The death of Theo van Gogh and the limits of tolerance, Ian Buruma writes about a 2002 speech the mayor delivered:

Quoting Geert Mak, Cohen suggested that “a new adhesive” was needed to “glue society together.” Without making it entirely clear what this glue should be, Cohen stressed the importance of mutual respect. This means, in his views, that we should tolerate opinions and habits even if we do not share them, or even approve of them.

We tolerate the fact that women are not allowed to become members of an ultra-Calvinist political party. Just so, we have to “tolerate certain groups of orthodox Muslims who consciously discriminate against their women.”

Cohen went further. Why not revive the Dutch idea of the pillar. Dutch citizens used to organize their lives through their religious affiliations. Perhaps Muslims should be encouraged to do the same. Then he spoke the sentence that most upset his critics: “The easiest way to integrate these new immigrants might be through their faith. For that is just about the only anchor they have when they enter Dutch society in the twenty-first century.” This was seen as rank appeasement; a reason for Theo van Gogh to compare Cohen to a Nazi collaborator.
– Source: Murder in Amsterdam, Ian Buruma. Pages 244-245.

Overall, though, Cohen was a well-liked mayor of a difficult to rule city.

Cohen’s depature comes just after the municipal elections, and ahead of many years of belt-tightening budget cuts.

Radio Netherlands says that Wouter Bos’ resignation has come as a major surprise:

After Labour”s better than expected showing in last week”s local elections, it was generally thought that he would carry on to lead the party into the June elections. Mr Bos himself actually said as much last week.

June”s early poll was forced after the government fell because of disagreement over the extension of the Dutch ISAF mission in Afghanistan. The Christian Democrats wanted to extend the Dutch military presence, but Mr Bos” Labour Party insisted on keeping to a pledge to withdraw the forces later this year. [4]

Deputy Mayor Lodewijk Asscher – -the driving force behind the clean-up efforts of downtown Amsterdam, including the controversial transformation of the Red Light District — will be the acting Mayor until a new Mayor has been appointed.