Home > Visitors Guide > Bicycles > Bike Stolen or Missing in Amsterdam? How to Get Your Bicycle Back

In Amsterdam, a city where there are said to be more bicycles than residents, large numbers of bikes go missing…

Table of Contents hide
1 Bike theft in Amsterdam
2 Use a sturdy lock
3 Lock your bike properly
4 Personalize your bike
5 Park in a well-lit area
6 Don’t go overboard
7 Bicycle Tours
8 The Fietsdepot — Bicycle Repository
9 What to do if your bike is stolen or removed
10 Finished with your Bike?

Updated with details about the removal of bikes.

“Good locks can’t prevent bicycles from being stolen. And few Dutch people report bike theft to the police because they think that the police won’t do anything about it.”

That’s the gist of this video report filmed by Radio Netherlands at the bicycle parking flat next to Amsterdam Central Station:

Bike theft is a fact of life in Amsterdam.

Amsterdam Police and the Cyclists’ Union estimate that each year between 50.000 and 80.000 bikes are stolen.1

Mind you: 58 percent of bicycles are stolen from in front of someone’s own house, and most bikes thefts take place during the daytime.

Stolen bikes — The Law: Never buy a bicycle from someone in the street. Both the seller and the buyer will be fined and — depending on the circumstances — both risk getting a criminal record and a possible jail sentence.

But you can of course minimize the chance that your bike gets taken.

Use a sturdy lock

As the above video suggests, one way to try and prevent your bike from being stolen is to use several sturdy locks. Thieves are more likely to steal bikes secured only by a standard lock. 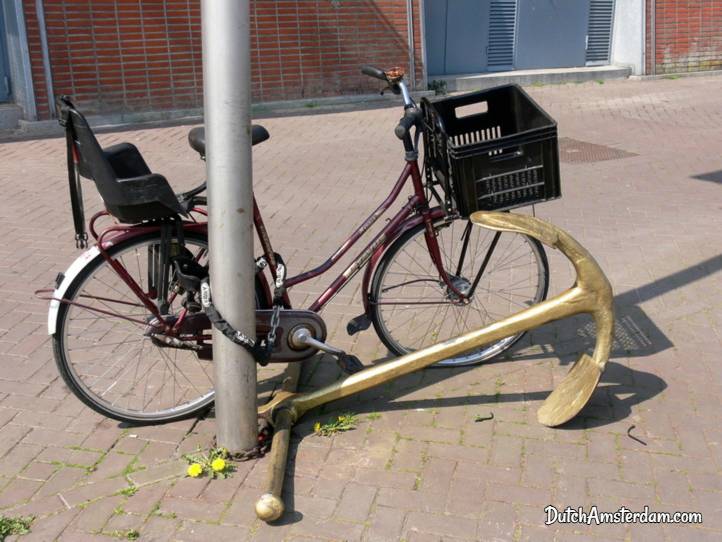 Use a sturdy bike lock. But note: in Amsterdam it is illegal to chain your bike to a lamp post, a tree, street furniture, or a bridge railing.

It is important that your learn how to lock your bike in such as way that individual parts cannot be stolen either. Otherwise you may end up with only a well-secured front wheel: 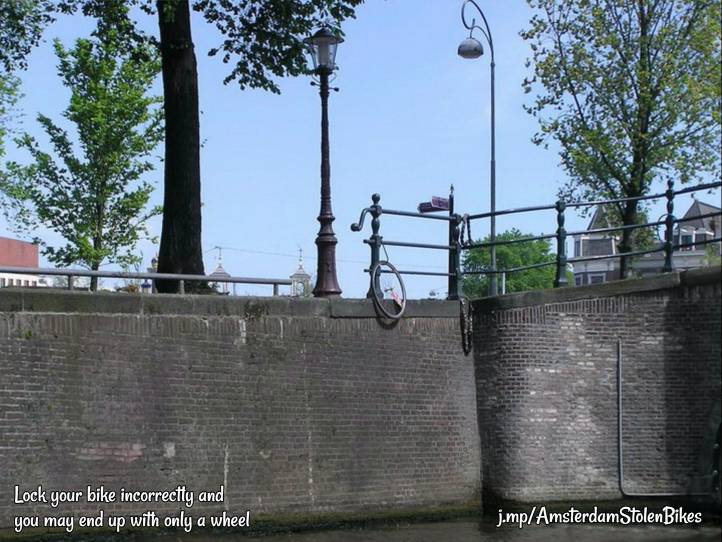 In addition to the use of sturdy locks many Amsterdammers use a more creative approach to deter bike thieves.

Bicycle thieves prefer to steal nondescript bikes instead of, say, ones adorned with flowers: 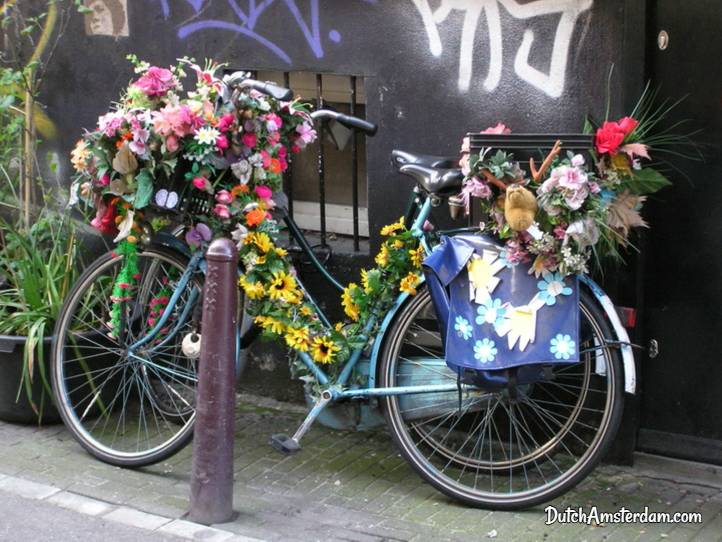 Almost as good as proper insurance against bicycle theft: a pimped bike

or bikes painted in distinctive colors: 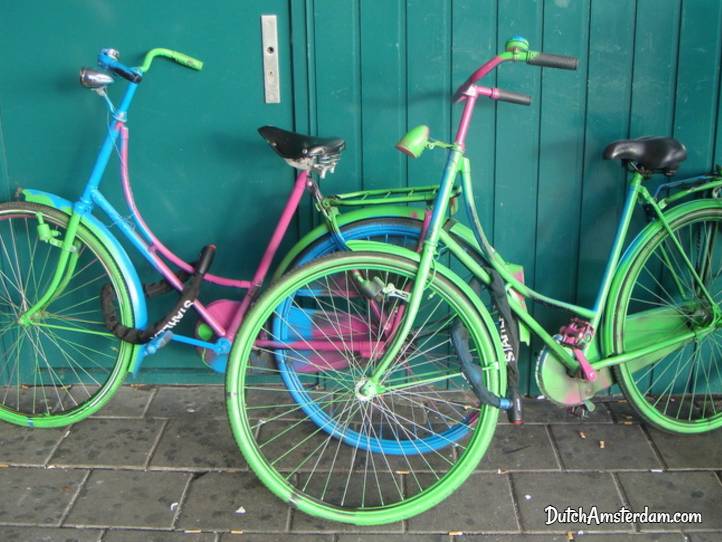 Thieves tend to bypass bikes that can easily be identified

Park in a well-lit area

It is also a good idea to park your bicycle near a street light: 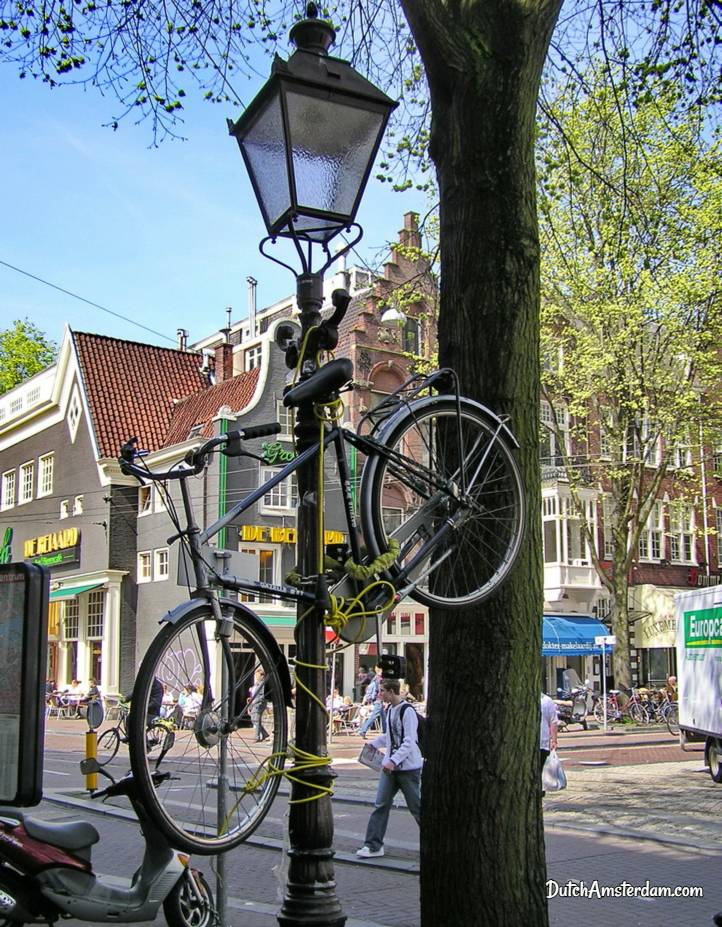 Someone’s idea of a practical joke

But you should not go out of your way to find overly creative parking solutions: 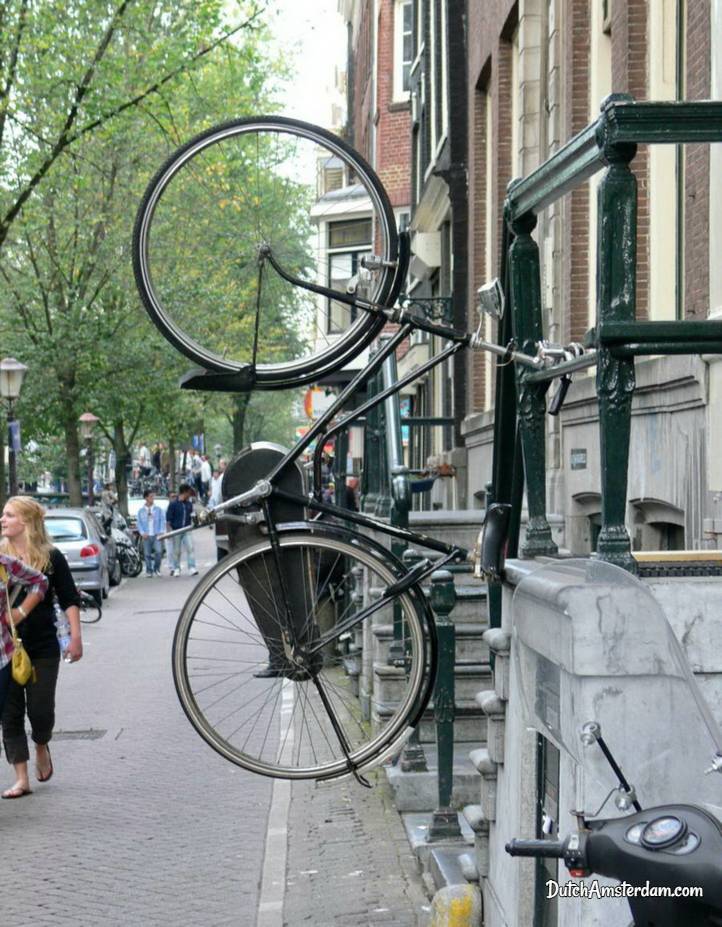 You can rent a bike, of course, but most tourists in Amsterdam prefer a guided bicycle tour:

If your bicycle is missing it may have been stolen. However, if you parked it illegally, including exceeding the maximum parking time2 — or the way you parked it created a hindrance or unsafe situation — it may instead have been removed by civil enforcement officers or the police.

Your bike can also be removed if it looks like it has been abandoned. As of September 2016, bicycles may not be parked at the same spot for longer than six weeks.

In the Central Station area — which extends to the area surrounding the ferry boat landing across the river IJ — bikes can only be parked in the same spot for a maximum of two weeks. 3

Bikes parked illegally at Amsterdam Central Station, Station Zuid, or at Leidseplein are removed without warning.

Elsewhere, illegally parked bikes and/or abandoned bikes will be labeled with a sticker that shows the date after which the bike is subject to removal.

Every workday, 17 civil enforcement officers drive around town in six trucks. Each truck carts away some 40 bikes a day.

In that case, all such bicycles are transported to the Fietsdepot (bicycle depository).

If it is determined that the bike was stolen, it will be returned to the rightful owner — free of charge (within Amsterdam).

If your bicycle was removed, you can either pick it up or have it delivered.

Until November 2014 bicycles were stored for up to three months. However, after two weeks so few people bother to come and collect their bicycles that this has now been reduced to six weeks for bicyles that were parked illegally, or two weeks for bikes that look like they were abandoned.

Statistics show that less than half (49 percent) of bike owners bother to come and collect their property.

TradeRFM, a company in Haarlem, takes care of all unclaimed bikes. Bikes that cannot be salvages are scrapped and recycled. Bikes in working order are sold to dealers, and bicycles that need to be repaired go to social workplaces.

Video: Amsterdam’s Fietsdepot — the Bicycle Repository. This is the first place to look if you think your bike may have been stolen.

What to do if your bike is stolen or removed

Have Your Bike Engraved
You can have your bike ‘tattood’ for free, between 10:00 am and 16:00 (4:00 pm) on Wednesdays and Saturdays at the locations locations listed here.

Bring an ID if you want your bike registered to your name.

You must be able to describe your bike. What are its unique features? It’s not for nothing that so many Dutch folks decorate their bikes. Better yet, have it engraved and/or registered to your name.

The Fietsdepot is about ten kilometers from the center of Amsterdam. This is something people loudly complain about, since it is ‘in the middle of nowhere.’ You can reach it by taking bus 82 from Amsterdam-Sloterdijk station (direction IJmuiden), bus stop Westpoortweg.

The good news is that the city is eyeing a new, central location for the bike depot: an old, unused metro tunnel underneath Central Station.

A feasibility study currently underway is expected to reach a conclusion by the end of 2017. If the project gets the go-ahead, the new depot could be ready for use in 2020 at the earliest.

Call the Police
If the Fietsdepot doesn’t have your bike, call the police — using the non-emergency number: 0900 8844.

Finished with your Bike?

If you want to get rid of your bike — either because it’s a wreck or you don’t want to go through the trouble of selling it — that’s easy.

Call 14020 and someone from the City of Amsterdam will come and pick it up, free of charge.

One in three Amsterdammers rides bike to work
Amsterdam loves bicycles
Don’t have a bike? Rent a bicycle, or take a bicycle tour.

This article was first published April 22nd, 2010. It is updated and revised on a regular basis.

Category: BicyclesRelated to: Bicycles, crime, Crime and SafetyThis article is updated regularly. Last major update: June 13, 2017
Last minor update: Wednesday, February 12, 2020 at 3:13 PM, Central European Time (CET)
Transparency:
The DutchAmsterdam website includes affiliate links. That means we get a small commission — at no additional cost to you — for each purchase you make. Your support helps us provide this site free of charge. Naturally, as our Editorial Policy states, our content is never influenced by our advertisers or affiliates.