There has been a lot of legal back-and-forth since a judge first ruled — in 2010 — that beer bikes could be banned from the street of Amsterdam.

But now, finally, a court has decided that the City of Amsterdam has the right to ban the ‘moron-movers’ (as many locals refer to the vehicles). 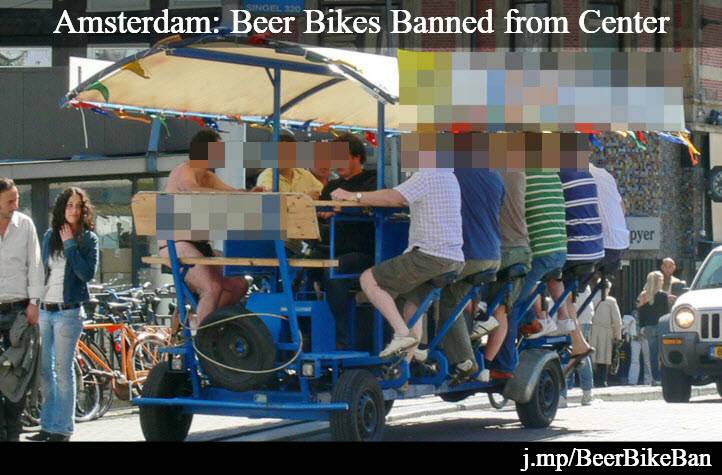 We’ll spare you most of the legal details, except for mentioning that the court agreed the city had sufficiently substantiated its reasons behind the ban. One of those reasons is that the beer bike is a slow and sluggish vehicle that frequently causes congestion in the city’s small streets.

Not only that, but the “the issues outlined by the mayor were confirmed by the number of nuisance reports received by the municipality,” according to the verdict.

Over the years, the ‘bar on wheels’ has become a symbol of all that’s wrong with mass tourism in the city’s center.

Thousands of Amsterdam locals filed complaints related to the bikes and their customers: obstruction of public roads, screaming and shouting, public drunkenness, urinating in public, obscene behavior, and so on. Most of the complaints came from people who live and work in the center of Amsterdam.

The court issued its verdict on October 31, 2017. The order banning beer bikes from the center went into effect the very next day: November 1, 2017.

City officials are now looking into the possibility of expanding the beer bike ban to include the entire city.

A much better way to see Amsterdam: Rent a bike

The ban covers downtown Amsterdam, including the medieval center (with the Red Light District), as well as the belt of canals (grachtengordel), and the Jordaan district. 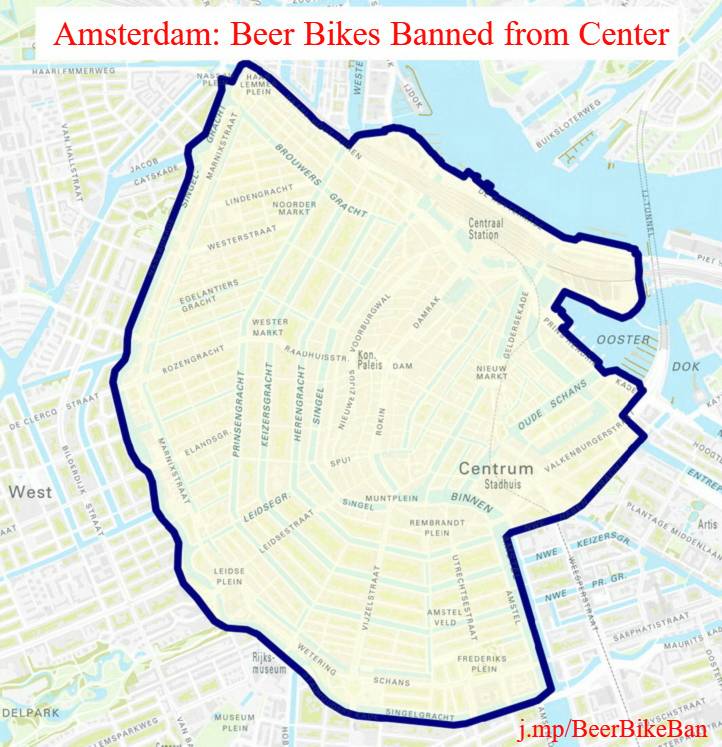 Beer bikes have been banned from the center of Amsterdam as of November 1, 2017. [Click image for larger version]

Beer bike business owners are not amused by the ban, which they have fought tooth and nail. They claim that in practice the bikes and their customers cause few nuisance complaints since they already have to observe many rules and regulations.

But we, the publishers of DutchAmsterdam, have ourselves witnessed countless situations in which their vehicles caused multiple problems, including dangerous traffic violations and inappropriate behavior.

Contrary to popular opinion, not everything goes in Amsterdam. And none of us will put up with the kind of boorish behavior often displayed by groups of men and women looking for low-quality entertainment.

Frankly, we’ve had it with the ‘Disneyfication’1 of Amsterdam.

Some entrepreneurs, meanwhile, have said they may look for ways to bypass the ban — for instance by creating smaller vehicles that seat fewer people at a time.

We believe such efforts are doomed to fail.

[Update, November 7, 2017] In fact, it has now been reported that a majority of the city council prefers to see the beerbikes banned in all of Amsterdam.

Where to report a nuisance

Nuisance complaints can be reported by dialing 14 020, or by completing this form [Dutch].

The text below is an archived earlier report from August, 2010.

Much legal wrangling has occurred since then, but in the end sanity won.

DutchAmsterdam.nl — Beer-bikes are no longer allowed to roam the streets of Amsterdam, a judge has ruled.

The mobile, pedal-powered bars can transport between ten and twenty people. While those who pedal can drink as much beer as they want, the designated driver does not drink any alcohol. The contraptions, for rent at several companies, are popular with stag- and hen parties.

According to the judge, legally beer bikes are classified as ‘bikes’ and may therefore not be wider than 1.5 meters, a standard exceeded by most of the vehicles.

The judge reached his decision in a case related to a May, 2009, accident with a beer-bike in Amsterdam-North. Three women were injured when the beer bike they had rented for a hen party proved too tall for a bike tunnel they tried to enter.

The party bikes full of drinking revelers frequently cause a nuisance, and often create a traffic hazard.

Last year several beer bike traffic incidents led the city’s government to look into the possibility of banning the vehicles.

Eventually the city decided against a ban, opting for a set of stricter regulations instead. At the time the city said it would, among other things, prohibit the bikes from being used in certain streets or district.

The bikes were already banned from operation within the Red Light District, due to the fact that no alcohol may be consumed on public property through the area.

A spokesperson for Amsterdam’s Center borough welcomed the judge’s ruling, saying there is little jurisprudence in this area. The district will now look into the possibility of a licensing system, Amsterdam daily Het Parool reports.

The magistrate sentenced the owner of the beer bike involved in last year’s accident to a fine of 1500 euros, half on probation.

According to the court the owner did not provide enough information to renters of the beer bike, thus causing a dangerous situation on the road.