DutchAmsterdam.nl — More than 100 people protesting a ban on squatting clashed with police on Friday as they rioted in the streets of Amsterdam’s historic city center.

Earlier in the day several hundred squatters had demonstrated peacefully against the new law, which carries punishments of up to one year in prison — or two years if violence or intimidation is involved.

Squatting was long tolerated and — under certain conditions – even legal in the Netherlands.

While the practice started in the sixties, with tens of thousands of people looking for a place to live squatting became popular in Amsterdam and other big cities during the seventies and early eighties.

At the time many landlords deliberately kept their buildings empty and refused to carry out necessary upkeep, speculating that the lots the houses stood on would sell for more money than they could get if they rented or sold the homes.

To combat this practice, which led to a dearth of affordable rental property, a 1971 court ruling said that squatting was tolerated if a building had not been used for a period of twelve months and the owner could not demonstrate that he planned to “soon” start using the building again. The property would be returned to the owner only after a civil procedure.

With more than 20.000 squatters in Amsterdam alone, the Dutch capital was the epicenter of the kraakbeweging (squatters movement. Kraken = breaking).

From popular to anarchistic

At first the squatters movement gained much sympathy, not only from those looking for a place to live, but also from people who appreciated the fact that the squatters saved countless historic buildings from being demolished. 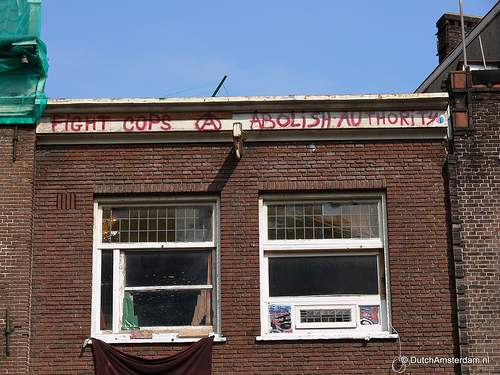 But over the years the movement became increasingly anarchistic. It also attracted many people from abroad, including shady and unsavory characters who appeared to be more interested in getting a free ride than in helping to provide much needed rental property.

In recent years more often than not riots ensued if and when police was ordered to clear a building. The increasingly grim character of the movement became clear when police started finding buildings that had been booby-trapped.

There also has been a sharp increase in reports about people losing their homes to squatters in situations that did not include speculation. One man lost his mother’s home — where she had lived since she was born — when she was hospitalized for a year. A family saw squatters move into the apartment they were renovating.

In the past squatters often renovated the buildings they moved into, but in recent years many squatted homes were willfully destroyed.

Nationwide today only some 1.500 squatters are left, occupying some 1,000 buildings.