People who, for one reason or another, wish to travel from the Northernmost station at the Boven ‘t Y Shopping Center to the Zuidas business district, are now able to do so in 15 minutes.

Trains in either direction run every six minutes. 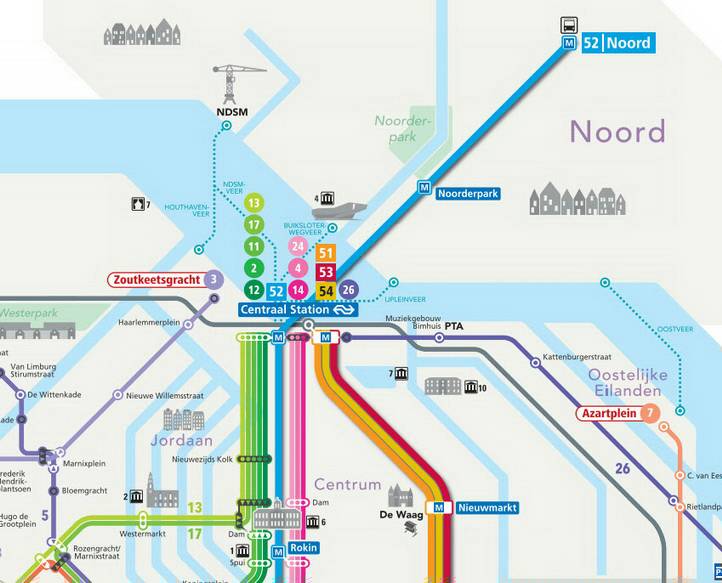 The new line, Metro 52, is accompanied by a host of drastic changes to Amsterdam’s public transportation network. Those of you who are still using old tourist guide books and maps can toss them out now.

The city’s tram and bus network has been overhauled to ‘encourage’ travelers to use the new line. The familiar ‘spiderweb’ model has been replaced by a fish-bone model.

GVB, the city’s municipal transport service,1 admits that many people will have to transfer more often in order to reach their usual destinations. However, the GVB also claims that most people will nevertheless reach their destinations faster than before.

Meanwhile many Amsterdammers (ourselves included) belief we are merely being ‘forced’ to use the new subway line so that the city can ‘justify’ the project’s enormous cost overruns. 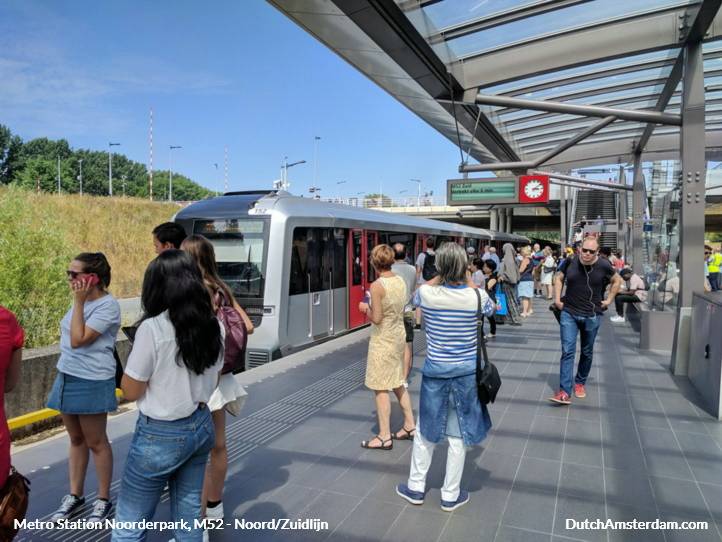 A series of mistakes and other setbacks — including a faulty tender process, administrative problems, and shoddy construction work, and the subsiding of historical monuments — has repeatedly led to later opening dates and skyrocketing costs.

By the time the new subway line officially opened, in July 2018, the costs exceeded 3.1 billion euro. That works out to some 3500 euro per Amsterdammer.

After a series of setbacks, in June 2009 a special committee concluded that the project should go ahead as planned, as stopping it would cost more than finishing it.

A second committee in December, 2009, slammed the City of Amsterdam saying that the municipality should never have approved the project.

When the city of Amsterdam approached the Federal Government in The Hague for financial aid toward the development of the new metro line, it optimistically forecast that the Noord/Zuidlijn would be used by 200.000 passengers a day. That number helped secure financial aid.

Later the forecast was adjusted several times, and currently the municipality expects that 121.000 passengers will use the new subway line. That is 39.5% fewer passengers than initially suggested. Guido Bruggeman, an independent urban transport consultant, believes even fewer passengers will actually use the Noord/Zuidlijn.

He has claimed that the bus and tram network in Amsterdam is being trimmed to prevent the costly North/South line from having too few passengers.

Indeed, the GVB is introducing drastic changes. On July 22, 2018, the current ‘spiderweb’ network of trams and buses will transform into a ‘fishbone’ model instead, with the ‘bones’ (the bus and tramlines) feeding the ‘backbone’ (the new metro line).

The GVB is trying to put a good face on it. While admitting that most people will have to make more transfers in order to go from A to B, GVB claims that overall they will get to their destinations faster. Time will tell, but nobody here is holding his or her breath.

Writer/Director S.G. Collins puts into words what many Amsterdammers think about the situation:

There is talk (isn’t there always…) of extending the metro line to Schiphol Airport. That’s a no-brainer, but there is quite a bit of money involved — and the Noord-Zuidlijn has already cost an arm and a leg.

That said, a direct metro connection to the airport would get passengers and local office workers back and forth more efficiently. Many passengers who currently travel to and from by train would switch to the metro. By subsequently reducing the number of slow trains (which stop at every station), space is available for international high-speed trains at the airport’s cramped underground train station.

Schiphol CEO Dick Benschop says, “It is no longer a question of if the metro line should be extended, but when.”

Category: News, Public TransportRelated to: North-South line, Public TransportThis article is updated regularly. Last major update: July 21, 2018
Last minor update: Tuesday, January 8, 2019 at 10:29 AM, Central European Time (CET)
Transparency:
The DutchAmsterdam website includes affiliate links. That means we get a small commission — at no additional cost to you — for each purchase you make. Your support helps us provide this site free of charge. Naturally, as our Editorial Policy states, our content is never influenced by our advertisers or affiliates.