• What to see at Dam Square
• What to do
• Where is the dam?
• Shops along the square
• Cafes, pubs and Eateries
• Restaurants
• Hotels at or near Dam Square
• How to get to Dam Square
• Map of Dam Square and surroundings
• Video: The History of the square
• More about ‘the Dam’
• Was Amsterdam named after a dam in the river Amstel? (Other page)

© Dutchamsterdaml.nl — Dam Square is Amsterdam’s best-known square, and it is a handy central location from which to explore the medieval city centre.

As the site of the Royal Palace, Dam square often is the focus of events of national importance — as in the annual Remembrance Day (May 4) ceremonies which take place at the National Monument, commemorating those who died during the Second World War. 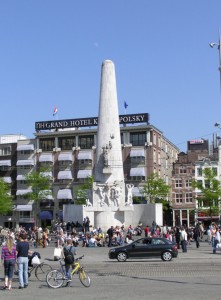 National Monument at Dam Square, Amsterdam, commemorating those who have died during World War II

Several times a year the square is the site of a funfair. From time to time there are other events as well, such as concerts, sports events or a used-books market.

Usually the square is home to a number of living statues and other buskers. At times protests are organized here.

Many people feel that Dam Square itself doesn’t have the allure and ambience of other big city squares. A relatively recent redesign hasn’t helped much either. The square’s distinctive cobblestones were discarded and replaced by, well, other distinctive cobblestones that have turned the place into a challenge for, among others, those who wear high heels.

The street furniture is uninspired and out of touch with the general setting.

The square could do with a fountain or two, perhaps, and certainly with some color: a lot more trees, for instance. And while we’re at it, some establishments where something to eat and drink doesn’t cost an arm and a leg.

And yet, miss Dam Square and you haven’t really seen Amsterdam. The Dam is the city’s beating heart.

What to see at Dam Square

There are several other monumental buildings, a few cafes, and some shops.

The building with the ugly façade — next to Bijenkorf — is an office complex designed by Cees Dam. The architect is also known as the designer of the Stopera — the monstrosity that serves as combination city hall/opera building — as well as the Options Exchange building at Rokin. 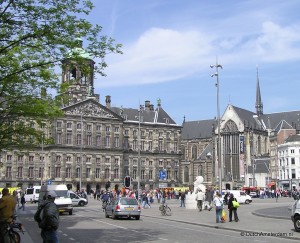 What these buildings have in common is that they are ugly, especially since they are totally out of context with neighbouring buildings. In our opinion people who design these type of projects in those kind of settings, and the people who allow them to be built, hate Amsterdam.

Things to do at Dam Square

For some reason tourists like their European squares to be overrun by pigeons. Oblivious to the nuisance the disease-ridden animals represent, many visitors feel obliged to be photographed while feeding them.

The city, meanwhile, actively tries to reduce the pigeon population. Among the approaches: sterilizing them via genetically-modified food, replacing their eggs with fake ones, and stationing a hawk on top of one of the buildings at the square. So please… don’t feed the pigeons.

Where is the dam?

As noted in that article at one time there was indeed a dam at what is now Dam Square. But don’t bother looking for it today. You won’t find it as it hasn’t been there for centuries. The dam — a wide bridge with wooden doors to stem the flow of water during high tide — was located roughly between where you currently see the National Monument and the busy Damrak/Rokin thoroughfare.

However, deep beneath the cobblestones there is a culvert through which water from the river Amstel still flows from Rokin to the remaining cul-de-sac of water at Damrak near Central Station. 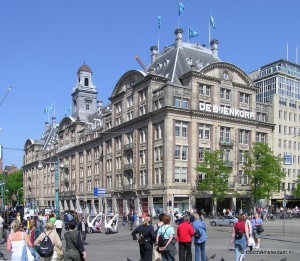 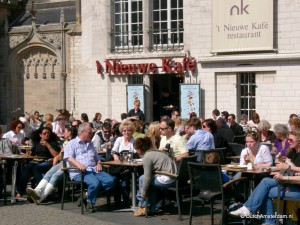 As a discerning visitor you’ll likely give Ripley’s Believe It or Not! a miss. Same goes for Tours & Tickets, since you can get those all conveniently from Get Your Guide.

You could also pop into the Nieuwendijk shopping street (between the New Church and Damrak) where, after just a few steps, you’ll find a number of fast-food places including McDonald’s, Burger King, a pizza place and the Dutch favorite, Febo.

Hotels at or near Dam Square

While Dam Square is easy to reach from just about anywhere in downtown Amsterdam and its surrounding suburbs, many tourists prefer to stay at or near this central location. Here is a listing of hotels at or near Dam Square. [View them on a map]

How to get to Dam Square

Dam Square is reached from Central Station via Damrak — the gaudy main drag which the City would like to turn into a red carpet of sorts. It’s a 5-10 minute walk.

Alternatively you can take trams 4, 9, 16, 24, or 25 and exit at the first stop, across from the Bijenkorf warehouse.

Across from Dam square Damrak turns into Rokin, the main thoroughfare between Dam and Munt square.

If you prefer you can saunter toward the Dam via the Nieuwendijk shopping street which feeds into Dam Square in front of the palace.

Across the square from Nieuwendijk the shopping street continues as Kalverstraat, which runs between the Dam and Munt square.

If you are coming from — or going to Munt square — you can also take Rokin. Rokin features stores, some pubs, a some very nice buildings as well.

Map of Dam Square and surroundings

Video: The History of Dam Square

— © Copyright DutchAmsterdam.nl. Do not republish or repost.