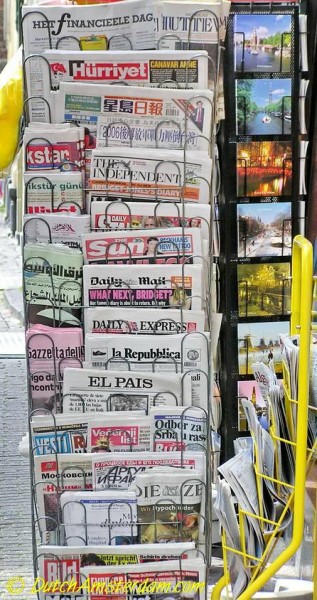 Many international newspapers are for sale in Amsterdam
DutchAmsterdam.nl is primarily a tourist guide to Amsterdam. But along with basic tourist information we also provide lots of extras, such as personal tips from Amsterdam locals (along with some comments and critiques you wouldn’t find in tourist office promotional material), and a selection of news items related to Amsterdam.

We post these news reports because we think they offer tourists, business travelers and expats more insight into the life of this great city.

8 of the 13 national newspapers in the Netherlands are published by companies that have their headquarters in Amsterdam.

However, just one of those papers, Het Parool, is considered “The Newspaper of Amsterdam.” Born as an illegal, stencilled newsletter in July 1940 — shortly after the Nazi criminals attacked and subjected the Netherlands — it was first printed as ‘Het Parool’ on February 10, 1941.

While the paper is now for sale throughout the Netherlands, it has a significant focus on Amsterdam.

Amsterdam has one local television station: AT5, which is considered an important source of information for locals. On a weekly basis 85% of the city’s citizens watches the station.

While AT5 is hugely popular among Amsterdammers, most locals don’t know what the name actually stands for: Amstel Television 5 — with ‘Amstel’ as a reference to the river that is said to have given Amsterdam its name. The ‘5’ was an effort to get people to program the station under the ‘5’ of their remote controls.

Commercially the station has not been all that successful. It has often teetered on the edge of bankruptcy, despite subsidies from the City of Amsterdam, which until 2012 was one of the primary shareholders.