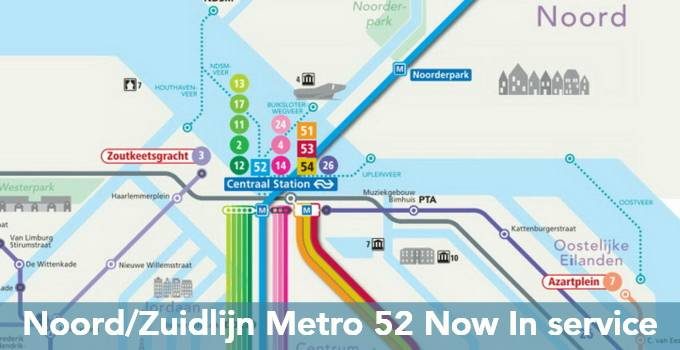 The Noord/Zuidlijn is a fact. After countless delays and huge cost overruns, the controversial metro line is finally in service.

However, it remains controversial. To ‘encourage’ use of the new line the city’s public transport network has been drastically overhauled. Many Amsterdammers will have to transfer more often, but — says the transportation company — will save time in the process.

The giant drilling machine tunneling its way through the ground underneath Amsterdam’s centuries-old inner city has reached Dam square.

At a speed of 15 meters a day it has already passed two state monuments — the former stock market and the Bijenkorf warehouse. The historic buildings incurred no damage.

Two buildings at Vijzelgracht, along the construction site for the new North/South line of the Amsterdam metro system, have subsided.

Shopkeepers in the buildings blame the construction work, while the metro project bureau simply says those buildings already had ‘bad foundations.’

Drilling for the North-South extension of the Amsterdam metro system is scheduled to start on March 11, but now warehouse De Bijenkorf has demanded the city first performs more research into the risks involved.

Persistent problems during the construction of underground stations for the metro line have already caused damage to several historical buildings.

The City of Amsterdam should never have approved the construction of the North-South metro line a special city council investigative committee concluded Tuesday.

The committee also urges the council to debate the risks associated with the planned drilling of a metro tunnel underneath the historic city center.

The independent Veerman committee, headed by former agriculture minister Cees Veerman, was set up to advise the city on the future of the new metro line — in light of constant budget overruns, revelations regarding deliberate lowball estimates during the bidding process, and damage to historic buildings.

The collapse yesterday of a buiding in the city center of Cologne, Germany, reverberated loudly in Amsterdam, Netherlands.

German authorities haven’t yet determined what brought down the structure, which housed Cologne’s historical archive, but the city is building a new subway line under the buildings that collapsed. Amsterdam is also building a subway line underneath its historic center, and buildings along the project have already sustained damage.