DutchAmsterdam.nl — Drilling for the North-South extension of the Amsterdam metro system is scheduled to start on March 11, but now warehouse De Bijenkorf has demanded the city first performs more research into the risks involved.

The upscale, luxury department store is located in the city center at Dam Square and along Damrak — directly above the path of the two tunnels to be drilled as part of the problem-plagued project. 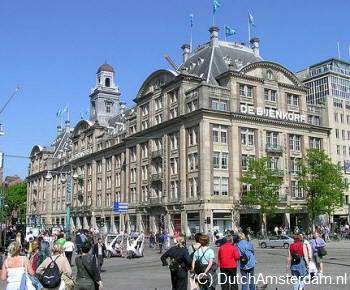 Persistent problems during the construction of underground stations for the metro line have already caused damage to several historical buildings.

De Bijenkorf, housed in a building designated as a Rijksmonument (National Monument) has hired an engineering firm to assess the risks.

In a confidential, but leaked, letter to the City Council De Bijenkorf reports the engineers state there is a risk of a ‘not-negligible damage.’

The letter indicates the Bijenkorf management will consider legal action should drilling start before additional research has been performed.

According to Dutch press service ANP , a spokesperson for the metro project says the engineering firm hired by The Bijenkorf has made an error of interpretation. “The firm assumes the facade will subside by 5 millimeters during the drilling process, whereas we assume it to be 1 millimeter.”

“We recently asked Europaen top experts in the field of tunneling to again consider the risks,” Detmar says. “The conclusion of these experts is that drilling is safe and sensible.”

Many of the drilling techniques to be employed in the tunneling underneath Amsterdam’s historic city center are either relatively new or have been specifically developed for the North-South Line project.

Last December a special city council investigative committee concluded the city of Amsterdam should never have approved the construction of the new metro line. The much-delayed project has been plagued with record budget overruns, revelations regarding deliberate low-ball estimates during the bidding process, and damage caused to historic buildings.

Committee members also said that Amsterdam’s politicians have hardly paid any attention to the question of whether or not the risks are acceptable.

Earlier last year a separate committee recommended the North-South Line should nevertheless be completed, since cancelling the project – labelled a ‘bottomless pit’ by local newspaper Het Parool — would cost the city €1.7 billion.

An Amsterdammer last updated this post on Thursday, January 23, 2014, at 2:57 AM CET (Central European Time)