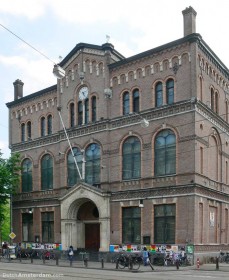 Pop-tempel, and former church, Paradiso in Amsterdam
Paradiso is one of Amsterdam’s best-loved live music venues — and a top destination for music lovers from all over the Netherlands and beyond.

The venue is located just a stone’s throw from Leidseplein — a bustling nightlife and tourist center. Formerly a church, the neogothic building has been dubbed the ‘Pop Temple.’

Inside is a large dance floor with a balcony on either side. The original stained glass windows have seen and heard such top acts as the Rolling Stones, Velvet Underground, Macy Gray, James Brown, Beck, Justin Timberlake, Lenny Kravitz, Sex Pistols, David Bowie, Prince, Willie Nelson and Nirvana.

From Hippie Hangout to Pop Temple

Paradiso was born during the hippie years of the late Sixties. The venue opened its doors in 1968. At the time it was subsidized as a ‘youth entertainment center’ by the city’s rulers — eager to give the hippies who were overrunning nearby Vondelpark an alternative hangout.

Small wonder, then, that this was one of the first places in the Netherlands where the sale and use of soft drugs was tolerated — a policy that eventually led to the creation of the euphemistically-named ‘Coffeeshops.’

While Paradiso was once synonymous with the rock music of the hippie counterculture, it has charted every music trend ever since. A much smaller hall upstairs often hosts unknown acts well before they make it big.

In addition it sees performance art and some lectures.

After the bands have played DJs spin their craft deep into the night.

Tickets are sold via TicketMaster. Select the performance of your choice on the Paradiso Calendar. [Note: Paradiso Noord/Tolhuistuin is a secondary venture in Amsterdam North — within walking distance of the free ‘Buiksloterweg’ ferry behind Central Station].

Paradiso is a non-profit organization. Part of its financial support is raised via the sale of membership cards. In order to purchase tickets, you must have a membership pass — such as the monthly membership pass (€3,50).

An Amsterdammer last updated this post on Thursday, February 25, 2016, at 11:56 AM CET (Central European Time)