DutchAmsterdam.nl — Taxi drivers licensed to pick up passengers at Amsterdam Airport Schiphol are sounding the alarm over illegal ‘taxi runners’ who solicit passengers and guide them to unlicensed cabs.

They tell Amsterdam TV station AT5 that on average they lose about 170 rides a day to the rogue cab drivers. 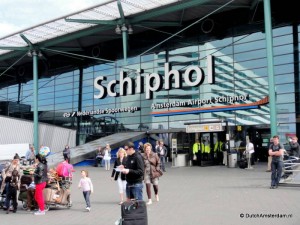 Licensed taxi drivers pay 3.600 Euro ($4708, GBP 2,998) a month for the privilege of picking up passengers arriving at the airport. Their cabs are waiting at the official taxi rank just across from Schiphol’s main entrance.

But the drivers say that recruiters solicit people inside the airport’s buildings, or just outside the exits, and lead them directly to the rogue cab drivers they work for.

Drivers say the situation is tense, and that it is only a matter of time before there is a physical confrontation between licensed- and rogue drivers.

In Amsterdam people can select a cab from among all the ones available at a taxi rank, instead of just taking the first one in line. This is done so people can pick the company, car or driver of their preference. But the licensed drivers says that with business stolen away by the illegal cabs they sometimes end up waiting five or six hours at the taxi rank between rides.

Taxi problems are not new in Amsterdam.[1] Both the local and the federal government are trying to find solutions for a situation in which, for instance, drivers from around the Netherlands choose Amsterdam as their business location. When too many taxis vy for a limited number of rides, problems are not far off.

In addition, many cab drivers are less than qualified to deal with the general public. Locals often refer to the taxi rank at Amsterdam Central Station as the ‘Gaza Strip‘ — not just in a none-too-subtle racist jab, but also due to the combative behavior of many drivers stationed there. Against all rules, drivers often either illegaly refuse short rides or demand higher fees.

When you do get a ride, some drivers won’t help you with your luggage, and more often then not your driver will not be clear on which route to take to your destination — either deliberately or in ignorance take a much longer one than necessary.

Just days after local Amsterdam newspaper Het Parool published an article about the gangster-like practices of taxi drivers stationed at Leidseplein, a taxi driver there killed a potential customer after an argument about fees.

Passengers arriving at Schiphol Airport are alerted via the intercom and signs to the presence of illegal taxi runners. Still, there are plenty of people who believe the promise of a cheaper rate.

In some case they may actually end up paying a little less than they would have to pay to a licensed driver. However, that would be the exception rather than the rule.

Rogue drivers know that since you knowingly took an illegal cab you have little to no recourse should your bill turn out to be considerable higher. (And keep in mind they’ve got your luggage in the trunk).

What you should know about taxis in Amsterdam