Home > About Amsterdam > Amsterdam wants to experiment with its coffeeshops

DutchAmsterdam.nl — The Amsterdam city council wants to experiment with coffeeshops — those establishments where soft drugs like marijuana and hash are legally sold and consumed.

Table of Contents hide
1 Legal Front Door; Illegal Back Door
2 Research
Note: This archived article is kept online for its historical value, as it provides context to later news on the same topic. If you’re interested in Amsterdam’s latest news on coffeeshops, you should see this.

In one variant drugs would only be consumed on the premises. The other consists only of a take-way counter open during established store hours.

If successful these new types of coffeeshops could be established in areas of the city currently not served by coffeeshops. 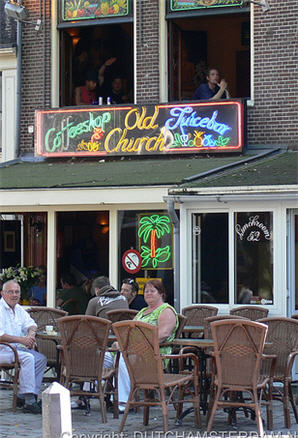 Coffeeshop Old Church, directly across from the Old Church in downtown Amsterdam.
© Copyright DutchAmsterdam.nl. Want to use this photo?

The idea for the test comes from Interim Mayor Lodewijk Asscher.

The test is Amsterdam’s answer to a request by the federal government of the Netherlands to study ways to combat nuisance factors surrounding coffeeshops. While coffeeshops have by all accounts succeeded in their original mission — to act as a barrier between soft drugs and hard drugs — the establishments come with their own set of problems. They range from the problem of nuisance created by hordes of drug tourists to, in some cased, the alleged involvement of organized crime.

The state hopes to continue tolerating the coffeeshops under the so-called gedoogbeleid, but wishes to see them operate on a smaller scale.

Meanwhile the City of Amsterdam thinks the solution to criminal involvement in the supply chain is to change the change the way coffeeshops get their supplies.

In the Netherlands coffeeshops are legally allowed to sell soft drugs. Customers may legally consume those drugs on the premises, or within the privacy of their own homes.

Yet technically it is illegal for the coffeeshop to buy — and for others to supply — their merchandise, just as it is illegal to grow and harvest commercial quantities of marijuana. In the Netherlands, this situation is referred to as ‘legal front door; illegal back door.’

It has often been suggested that the government should allow for a number of legal cannabis farms from which coffeeshops would have to obtain their stock.

Yet thus far the state — until recently governed by a coalition government dominated by a Christian party — has been reluctant to explore that route.

The City of Amsterdam has sent a letter outlining its proposals to the Ministry of the Interior.

Currently research is already being performed in the city boroughs of East and West, Amsterdam daily Het Parool reports.

Among other things researchers are looking into the reasons people come to a coffeeshop.

An expanded research project will include 50 coffeeshops through the city — in all borough except for the one in the city center. According to the city council the situation downtown differs too much from that of the boroughs, primarily because the coffeeshops in the center of town cater to large numbers of tourists.

A planned survey will poll residents in areas with and without coffeeshops. Aided by tax authorities, police and the judiciary the city will also determine for each coffeeshop whether income is derived primarily from drugs or from food and drinks. While coffeeshops are not allowed to serve alcohol, most serve health food, juices, soft drinks as well as coffee or tea.

The proposed experiment can only be started when this survey has been completed — at the earliest at the start of next year.
— — © Copyright DutchAmsterdam.nl. Do not republish or repost.

Category: About AmsterdamRelated to: Coffeeshops, marijuana

An Amsterdammer last updated this post on Thursday, January 23, 2014, at 2:37 AM CET (Central European Time)