DutchAmsterdam.nl — The municipality of Amsterdam will examine whether its policies for street artists can be tightened.

A sharp increase in the number of, primarily, East European street performers is causing much trouble in the city’s center.

In particular certain ‘living statues’ are said to regularly threaten or verbally insult onlookers who do not pay up.

A ‘living statue’ is a mime artist who, while wearing a costume and makeup in sculpture-like colors, poses like a statue — standing still for long periods at a time. 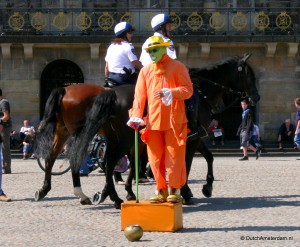 Living statue, Amsterdam (not one of the troublemakers)

The World Championship of Living Statues is held annually at Arnhem in the Netherlands, featuring some 300 artists.

Many living statues work as buskers. But in recent years, Amsterdam’s Dam Square has been inundated with beggars — reportedly most of them from Eastern Europe — whose performances are far below par.

They move more than they stand still, and many hurl insults and threats at observers who don’t pay up.

Last year the city handed out more than 200 tickets to street artists who caused problems.

“We get complaints that range from nuisance to outright begging and pick pocketing,” says Edwin Oppedijk, spokesman for the Center Borough.

He says it’s an open secret that in the morning some of them arrive in a van, get handed masks and costumes, and get picked up again at the end of the day.

While legitimate street performers give each other space to perform, last year several of the living statue beggars interfered with the performance of a far more popular street artist.

Having gathered a large audience, the statues decided to ‘perform’ inside his circle of onlookers. The street artist was not amused — and neither was his audience — which awarded him with what apparently was a larger-than-usual offering, while shunning the rude beggars.

Oppedijk says he cannot officially comment on the quality of what is on offer, but he notes that the city can always take steps to minimize nuisance.

“This can be done through criminal law, with police acting in case of pick-pocketing or intimation,” he says. “Meanwhile the city must work with administrative tools, such as permits. We are now considering whether new rules are needed that would allow for stricter enforcement.”