DutchAmsterdam.nl — Amsterdam’s most photographed bridge, the Skinny Bridge across the river Amstel, is damaged by wood rot. Large sections of the bridge will have to be restored.

The City of Amsterdam will do anything to keep the iconic bridge, a national monument, in its original state. 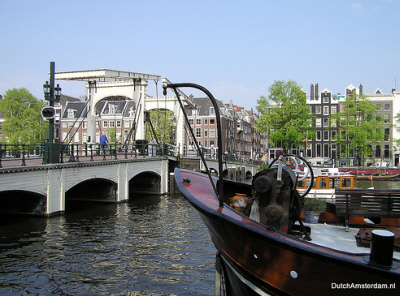 Amsterdam daily Het Parool reports the city has earmarked 1.1 million euro for the renovation, which will commence in May this year.

The Skinny Bridge, originally name Kerkstraatbrug, was built in 1934 to replace earlier versions that dated back to 1691.

Spanning the Amstel at the Eastern end of the Prinsengracht, the original bridge is said to have been built for two wealthy sisters who lived on opposite sides of the river and wanted an easier way to visit each other. But few Amsterdammers believe the bridge was named after their surname, Mager (skinny). Rather, the bridge got its name from the fact that it was so narrow that two pedestrians could barely pass eachother.

Another legend has it that the bridge was built to acommodate two spoilt young ladies who were too lazy to walk the long way round from their house in Kerkstraat to their stables across the river.

Whichever is the case, the narrow bridge was replaced by a wider version in 1871. While the original bridge had thirteen arches, the new bridge counted only nine.

Scene from a Dutch-language video about Amsterdam’s canals

In 1929 the condition of the new bridge had also deteriorated to the point where it had to be replaced. The city at first considered designs for a steel and stone bridge, but a public outcry brought a swift end to those plans.

In 1934 the bridge was demolished and replaced with the current model — an exact replica of the 1871 bridge, except that it is quite a bit wider. It was last renovated in 1969.

Since 2003 the Skinny Bridge has been the sole domain of pedestrians and bicyclists.

At night the draw bridge, which is opened many times a day to let ships pass, is illuminated by 1200 light bulbs.
— — © Copyright DutchAmsterdam.nl. Do not republish or repost.